China is the #1 threat to video surveillance providers around the world but how well are Chinese and Taiwan surveillance manufacturers actually doing?

This chart summarizes the key financial data analyzed inside this report (click for full size):

Incredible Profitability of Hikvision and Dahua

On the other hand, Hikvision and Dahua are clearly not generating these massive profits from Western markets. The overwhelming revenue and probably all the profits are coming from the domestic Chinese market. In particular, how Hikvision generates such a high net profit margin while selling so heavily to the Chinese government is hard to understand, except that the Chinese government partially owns the company.

Though they have an unfair advantage, there is nothing that can be done about it so long as the Chinese government is committed to spending such huge and lavish sums on video surveillance with their domestic manufacturers. And this means that Hikvision and Dahua have incredible war chests to expand internationally.

Hikvision Valuation Equal to Everyone Else Combined

Hikvision's market valuation is ~$28 billion USD, having roughly tripled in the past year. We estimate that is equal to every other manufacturer's surveillance businesses' valuation combined, including Axis, Avigilon, Bosch, Pelco, Sony, Samsung, Tyco, etc., etc.

The primary driver of this is that Hikvision is valued at 10x their annual revenue, a mind-boggling number for a company of that size / age. In comparison, Axis sold at ~4x their revenue and most industry observers felt that Canon significantly overpaid. Avigilon is trading at ~3x their revenue. Most video surveillance manufacturers are valued at 2x or less their revenue, especially the lower growth mid-tier Western ones.

The other factor is Hikvision's revenue is now so large. 2014 revenue was nearly $3 billion, up roughly $1 billion year over year. It is as if Hikvision grew 'an Axis' in a year. 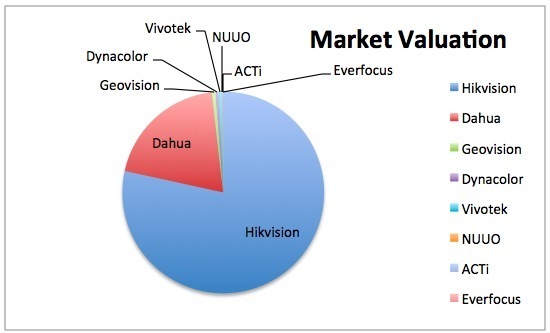 Three of the Taiwan manufacturers are valued at ~$200 million each (Geovision, Dynacolor and Vivotek), yet they are absolutely dwarfed by either Hikvision or Dahua.

To us, the Chinese manufacturer's position seems unsustainable, both for valuation and revenue growth. Of course, much of this depends on the Chinese government willingness to spend huge sums on video surveillance, direct it towards Hikvision and allow them to generate huge profits on it.

2/3rds of the Taiwan surveillance manufacturers suffered revenue declines in 2014, with only Dynacolor, an OEM, having growth over 5%.

This chart shows the variance between Chinese and Taiwanese manufacturer growth: 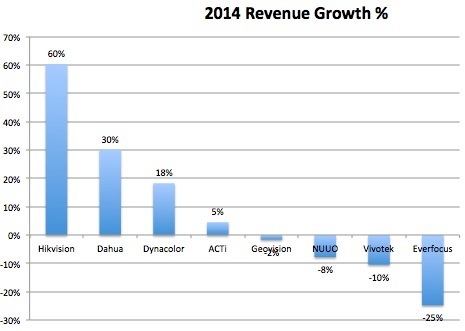 The Taiwanese manufacturers have suffered across the board sharp declines in their stock price over the past 12 months.

On the positive side, most of the companies stock prices has been rising rapidly in the previous few years before this. However, the declines in the past year have been quite steep, with 50% declines average.

The 'Avigilon of Asia' - Geovision

Relatively speaking, the Taiwanese company doing the best is Geovision, who does not seek nor get a lot of press. Unlike the other Taiwanese manufacturers who focus strongly on one side or the other (i.e., cameras or recorders), Geovision has long focused on solution sales.

Geovision has consistently high profits for years, in the same range as Hikvision and Dahua, especially impressive given their lack of a political advantage. The main concern for Geovision is revenue growth - which has been minimal over the past three years.

However, Geovision is certainly another example of a solution provider doing financially well for itself, even if it is not as widely used or recommended.

The two best known Taiwan brands in the West are ACTi and Vivotek. Neither are doing that well financially, despite the fact that they do continue to fairly aggressively release new products.

ACTi has been stuck in the $40 million revenue range for years, generating meager to no net profits.

Vivotek has gotten almost 3 times as large as ACTi, to the ~$120 million revenue range, with solid net profits in the 10% range over the past few years. However, Vivotek's revenue dropped ~10% in the past year.

Ultimately, it is a very hard task for the two of them to compete with Hikvision and Dahua who are selling many similar cameras yet are willing to offer them at significant discounts to even the low costs ACTi and Vivotek have traditionally offered.

Manufacturer With the Most Problems - Everfocus

However, there is clearly one manufacturer who stands out for having the most problems - Everfocus.

In the past year alone, revenue has dropped 25% to ~$53 million USD. About 5 years ago, Everfocus revenue was in the ~$100 million USD range. Equally troubling is that net profits are essentially nil.

Everfocus got caught in the middle. Unlike ACTi and Vivotek, they never really committed to IP, so they missed out on that growth / opportunity over the past 5 - 10 years. Instead, and unfortunately, they embraced HDcctv / HD-SDI early, despite high costs and low support.

HD Analog And the Future

Beyond the huge advantage the Chinese manufacturers have domestically, we are seeing strong uptake on HD analog, driven by very low relative pricing and true HD quality. This will further help the Chinese manufacturers and undermine the Taiwanese, who have focused far more on IP, which is quite susceptible in the lower end of the market they have traditionally done well in.

Unless the Chinese domestic market sours / turns, we foresee far more damage / impact from the growing power of Hikvision and Dahua.

Samsung Goes AHD, Sets Battle with Dahua and Hikvision on Jul 20, 2015
HD analog continues to grow. One of the biggest problems so far is the lack...
Comments (26) : Subscribers only. Login. or Join.