Many social media posts have variously celebrated or warned about the growing use of facial recognition for payments in China. An example of one such video is shown to the right.

When one looks at such videos, an obvious question is: how do they do that accurately? There are many millions of people in China and, in these videos, the person seems to simply look at the camera and is promptly recognized.

However, the system is not omniscient. While facial recognition for payments in China is real, it relies on verification, not identification, a key difference.

In this post, we examine how facial recognition payments really work in China, and how it fundamentally relies on the country's system of national ID cards.

In many convenience stores and restaurants in China, it is indeed possible to pay without bringing a cellphone or cash. But it is not as simple as just looking into a camera at the check-out counter. There are actually two steps:

The cellphone number is used to bring up your personal details and an existing photo of your face. That existing photo is compared to the one just taken, and if it is a match, the payment goes through.

Why It Is Possible: Alipay

Alipay is the mobile payments arm of Chinese e-commerce giant Alibaba [link no longer available](in China similar to Amazon in the US). Over 900 million, mostly Chinese people, have Alipay accounts, which require a national ID card, bank account, and mobile phone to activate. Alipay users can also enable facial recognition by taking a selfie with their cellphone. Therefore, just by plugging in a phone number at check-out, Alipay can directly access a high-res image of a user's face along with bank account details.

Alipay released a video showcasing how this system works here

As the video shows, a phone number is required, not just a face. The still below demonstrates: 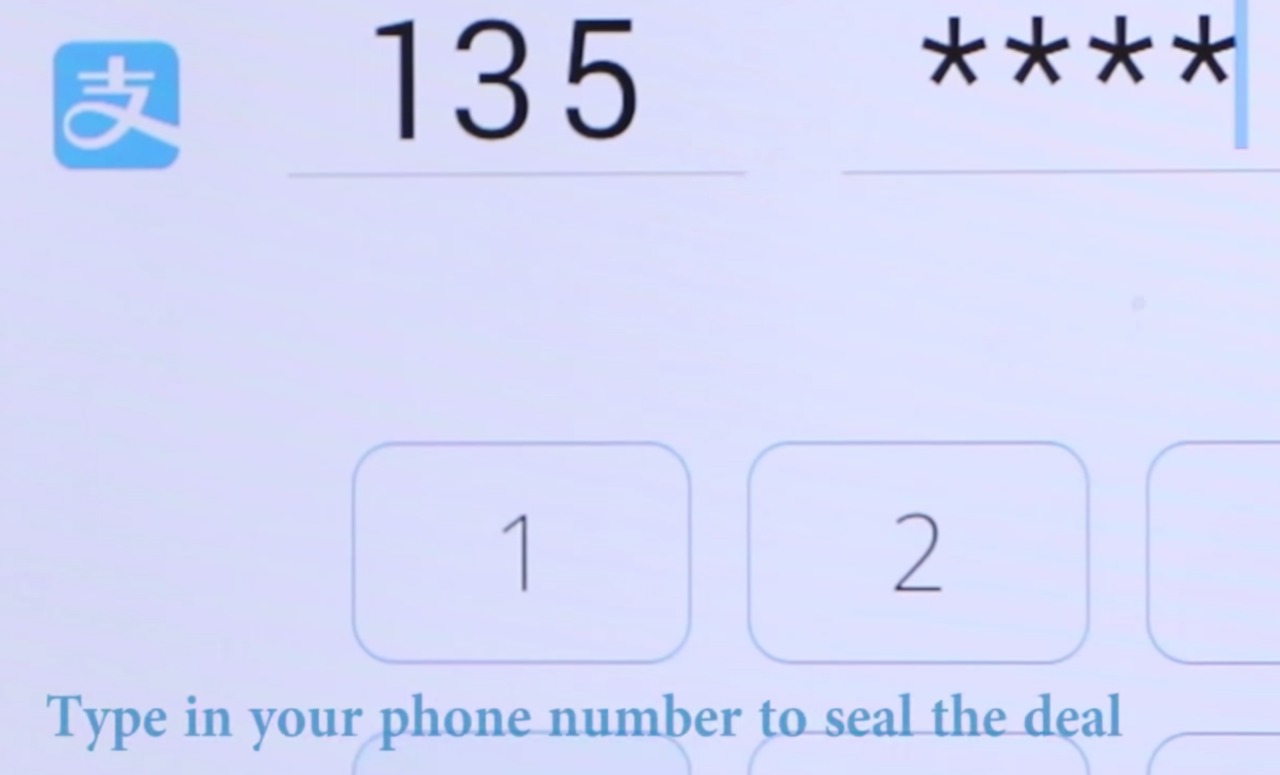 The video also claims that the camera is able to correctly match users despite heavy make-up, different hair color, and other people being present in the photo, as the still below demonstrates: 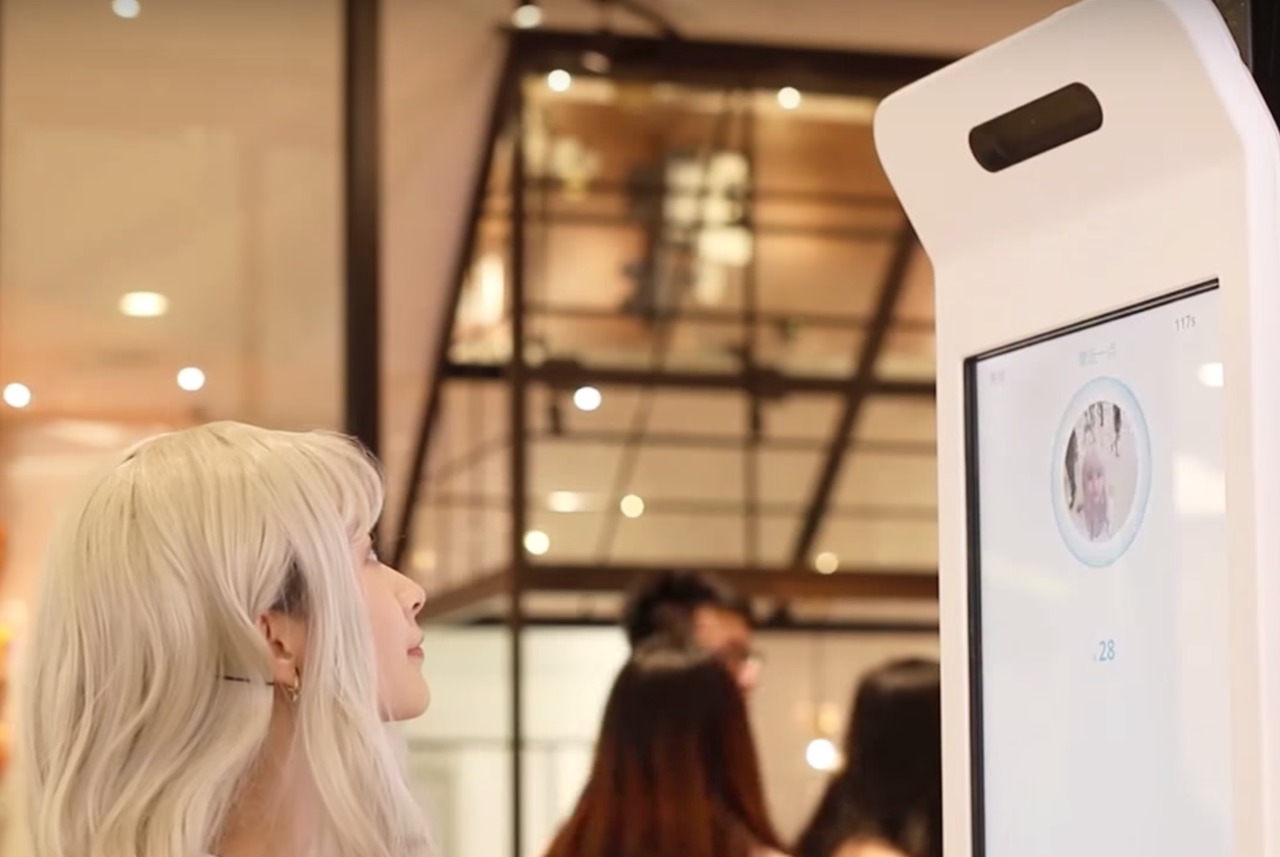 This is certainly possible, though the more a facial recognition system allows variance in appearance, the greater the risk that it could mismatch to another person. However, since they are doing verification, not identification, the risk is reduced.

Therefore, payment via facial recognition in China is not done by comparing someone's photo to mass numbers of people in an existing database. Technically, this is called '1:N' or one-to-many identification. This is the kind of facial recognition that would need to be done by video surveillance cameras in shopping malls looking for shoplifters or in cities looking for terrorists, etc.

One example of this somewhat science fiction approach is Dahua's 2017 marketing video where they (impossibly) generate a facial recognition match of a person with a hat, in a shadow, looking away from the camera:

While looking directly into a camera's FoV improves image quality vs public surveillance cameras, identification is still difficult to do accurately and reliably when comparing to even thousands of people and would be vastly more difficult in trying to match across millions or hundreds of millions in China. People look alike, especially across large groups and especially when the system is trying to tolerate differences in hairstyle, makeup, weight gain, etc.

Rather, in the China payments case, '1:1' verification is being used: Alipay's software is only comparing the photo taken at check-out to an existing photo that is part of someone's Alipay account. As such, the system just needs to assess how probable the face presented at the camera is to the reference image on file. 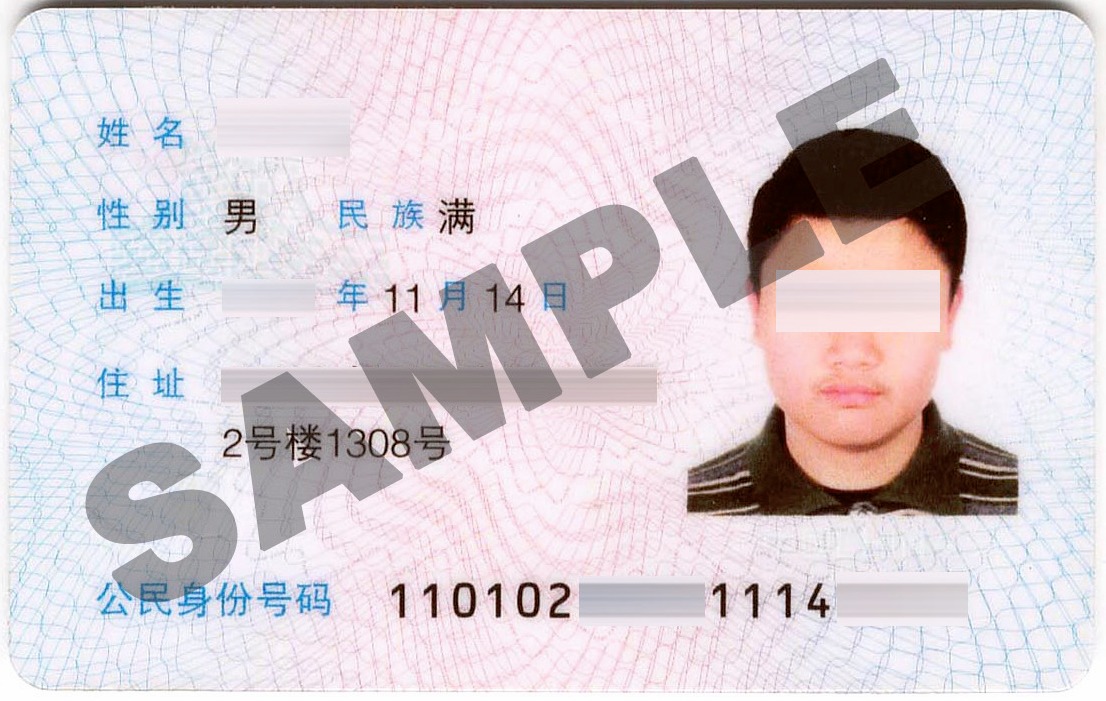 A major factor making such a system easier is that Chinese citizens, by law, must have a detailed national ID card, officially called a Resident Identity Card or  居民身份证. These detailed cards are issued by police and function as a sort of domestic passport. Because a national ID card is required to activate Alipay, an Alipay account is effectively as trustworthy as a legal ID.

(In the US, however, many people have a driver's license as their only official ID. Because they are relatively easy to get and commonly faked, driver's licenses from many states are not enough to even fly domestic. )

Other countries do have national ID card systems, like France. However, in France, having such a card is not obligatory and many people do not have one. Compulsory national ID cards have a controversial past in France, as they were instrumental in deporting Jews to camps during WW2; when France attempted to make biometric ID cards compulsory in 2011, the proposal was heavily criticized and ultimately dropped.

Partly because of the lack of such a history, China is well-known for giving short shrift to privacy issues. For example, the CEO of Baidu (China's Google) once said that Chinese people care less about privacy. Still, there are signs this is changing. China passed a personal privacy law in 2018 described by some as "more onerous" than the EU's GDPR. Alipay, for its part, claimed in its promo video that:

We don't store data. We also protect data by using encryption. We want to do everything in our capacity to protect users' privacy and security online. 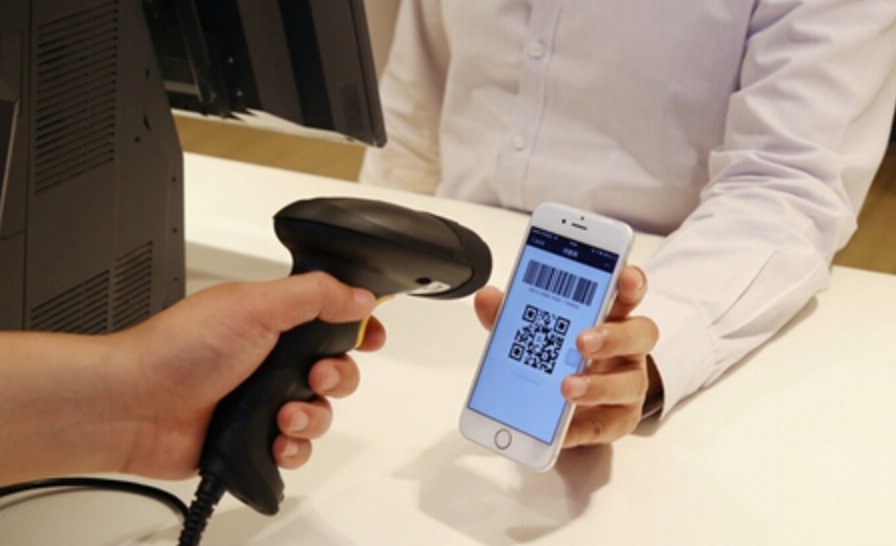 IPVM understands that while facial recognition payment is possible in many Chinese outlets, most people still prefer to use their cellphone. The way this is done is by scanning the unique Alipay barcode that is part of their Alipay 'wallet' at check-out. This does not require inputting a cellphone number or posing for a picture and is therefore significantly faster.

However, if one was to leave a cellphone at home, Alipay's facial recognition feature does enable payments without needing anything at hand, a significant convenience.

A LinkedIn post shows a man using facial recognition instead of a card at a China ATM. "No card needed anymore, just bring your face", the poster claims. 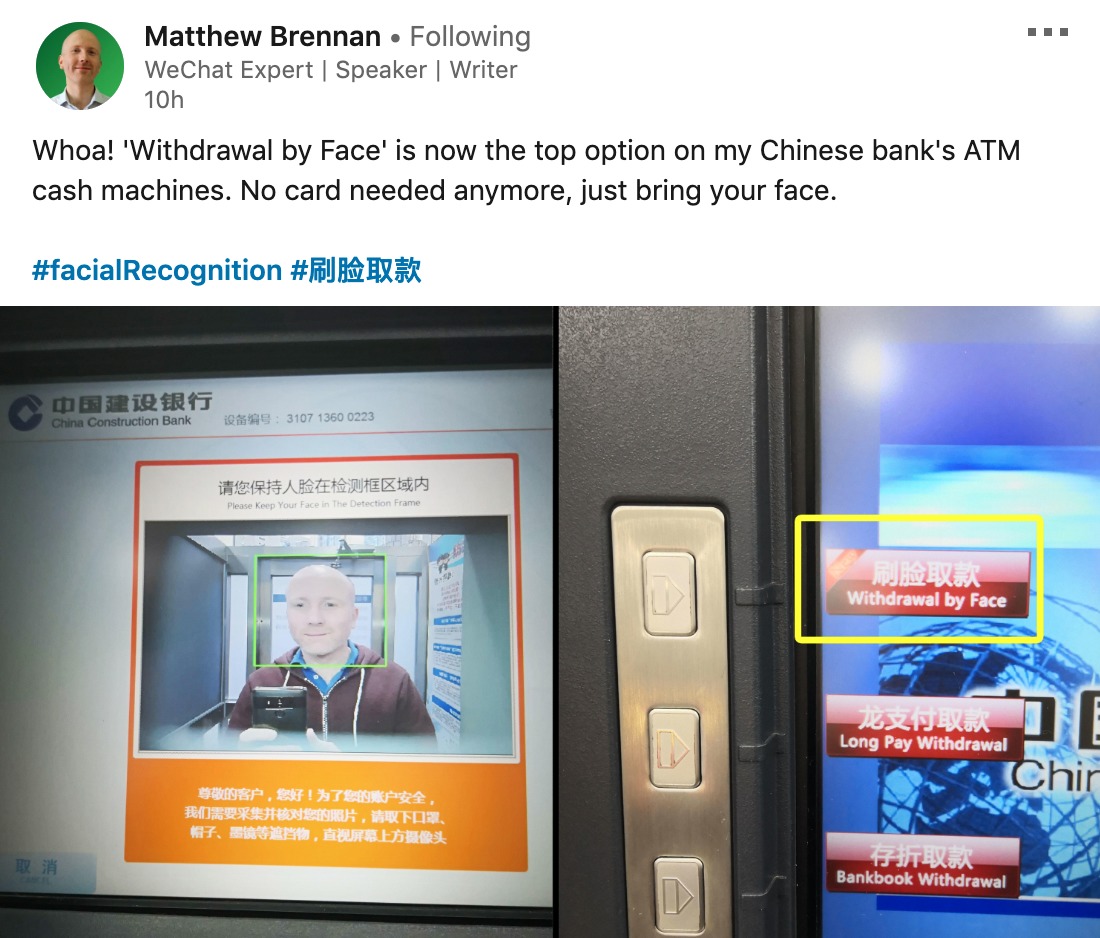 IPVM has confirmed that some ATMs in China do use facial recognition. However, this is the same system as using your face to pay for groceries, i.e. it is based on verification not identification. What the LinkedIn post does not show is that a phone number or national ID number is typically required as well.