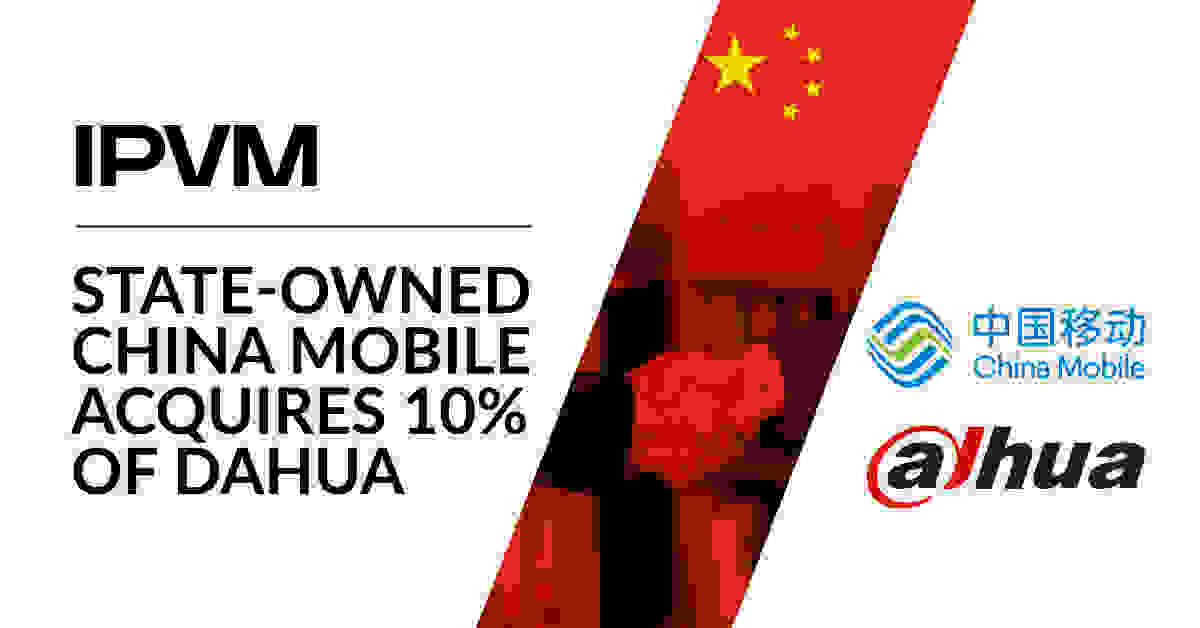 In this post, IPVM examines this news and what it means for Dahua.

In a March 26 announcement, Dahua disclosed that China Mobile is buying $853 million of Dahua stock giving it ownership of 10.42% of the company:

Before the China Mobile investment, Fu Liquan and his wife Chen Ailing owned 36.56% of Dahua, and after the transaction, the pair now own 33.11% of Dahua, the disclosure stated, adding that there has been no change in controlling shareholder (Fu).

China Mobile received a significant discount, paying just 80% of the average price for Dahua stock from the last 20 days, at 17.94 yuan per share while Dahua's stock today trades at 24 yuan per share.

Dahua said the ~$850 million of cash from this "strategic investment" has three main purposes.

China Mobile is China's largest telecom provider, with ~1 billion subscribers and about $117 billion in sales last year. Its dominance stems from the fact that it is state-owned, listed on the official directory of the State-owned Assets Supervision and Administration Commission of the State Council (SASAC):

SASAC is also the controlling shareholder of Hikvision, with SASAC entities controlling about 41% of the company, per its latest disclosure.

Longer-term, the fact that the PRC government is now Dahua's second-largest shareholder means Dahua now has direct state backing, the one factor it lacked in its competition with Hikvision. This will help Dahua compete further with Hikvision, particularly in China's vast market for government security projects.

Last September, Reuters reported that Alibaba and China Mobile were eyeing a $443 million investment into Dahua, claims that Dahua strongly disputed, even claiming it would "sue whoever reported this" (which it did not do). Reuters's reporting on China Mobile has been proven correct by this announcement. It is unclear whether Alibaba never considered investing in Dahua or subsequently decided not to do so.

One of Dahua's main counterarguments to overseas criticism is that unlike Hikvision it was not state-owned. Now, it partially is.

However, China Mobile is not a camera manufacturer, so they must bid with cameras from domestic manufacturers (i.e. Dahua, Hikvision, Huawei, etc.).

IPVM has previously reported on Dahua and Hikvision winning direct, both over each other and Hikvision over other city IoT integrators. Direct deals from camera manufacturers are quite common, and so are deals won by the major China telecom companies (i.e. China Mobile, China Unicom, China Telecom). Now that China Mobile owns a significant portion of Dahua, Dahua could become an even bigger winner in safe city projects.

Now everyone who wondered why Dahua was included with the NDAA ban can finally have a good answer.