As the trade war continues to heat up, 170+ integrators told us "What impact will the US / PRC China conflict have on the industry?"

Respondents were sharply divided, as the chart below shows: 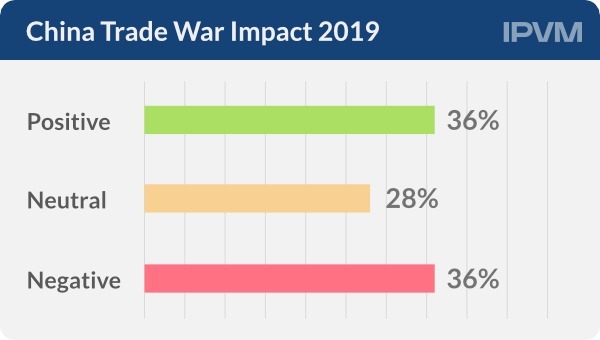 The top positive theme was that the overall quality of the industry will improve while the top negative was that pricing and disruptions would increase.

The largest portion of negative voters felt the trade war would lead to higher prices, product and component shortages, suspicion and more disruption of the industry and companies tried to adjust. One respondent even envisioned an eventual arms race between the US and China:

Many felt that a positive of the trade war would be less Chinese-made product in circulation:

We Need Each Other

However, some integrators believed that the US and China needed each other to foster competition, and innovation:

Cybersecurity Over Cheap Is Good

A fair number of voters felt the trade war was good because it signified that people were considering cybersecurity over low cost, as seen below:

A few mentioned that the trade war was good in that it was forcing the US to develop policies and technologies to improve cybersecurity and protect against incursions from foreign powers.

Most of the neutral voters said that there would be a negative beginning followed by a positive outcome in the long term as supply leveled out, new suppliers were found and pricing settled:

A smaller number of people felt that the impact on them would be minimal, with possibly a boost to other manufacturers and some saying that since they did not use affected products, the trade war would not have an effect.

Negative for China and Positive For Others

Some felt that while China would be negatively impacted, with one respondent noting China would no longer be able to steal intellectual property. Many said others stood to gain as well, with US and Sweden-based companies cited:

No Lasting Effect. Back To Status Quo Before Long

A small number felt that there would be no lasting effect since the trade war was basically a "dog and pony show" and that an arrangement would be made "behind closed doors":

A few felt that China truly would find no bottom in their race to the bottom and would simply lower prices to accommodate the tariffs:

Others WIll Fill The Gap

Some saw an eventual shifting as others stepped in to fill the role China had been playing, meaning minimal impact:

How this ends is hard to tell. For example, will the USA sanction Dahua and Hikvision? Will the US and the PRC's increasing tariffs and barriers to entry continue or increase?

While it is unlikely for the 2 countries to become allies any time soon, it is possible, but not guaranteed, that the hostilities could grow further splitting the countries, and the video surveillance industry, in the process, apart.