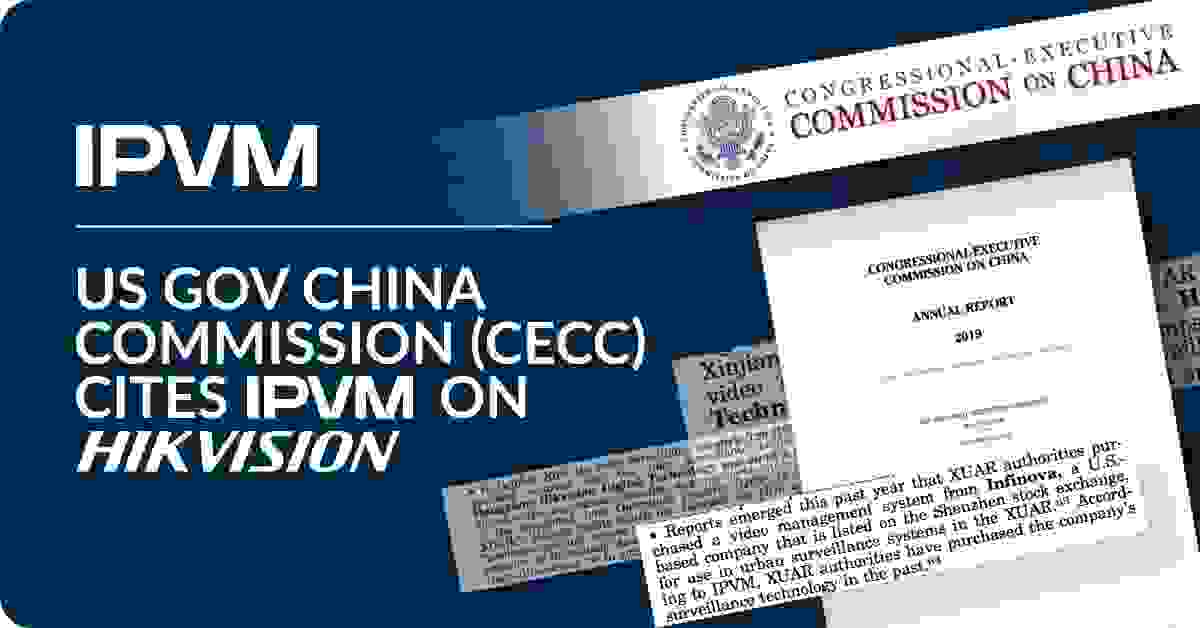 In this post, we examine the report's citing of IPVM along with its broader impact, including:

Yesterday the Congressional-Executive Commission on China (CECC) released its 2019 report to the Congress and the President, which is the bipartisan agency's main purpose. While the report covers issues like Tibet and the Hong Kong protests, Xinjiang received heavy coverage as well - Uyghur activists even attended the report's release: 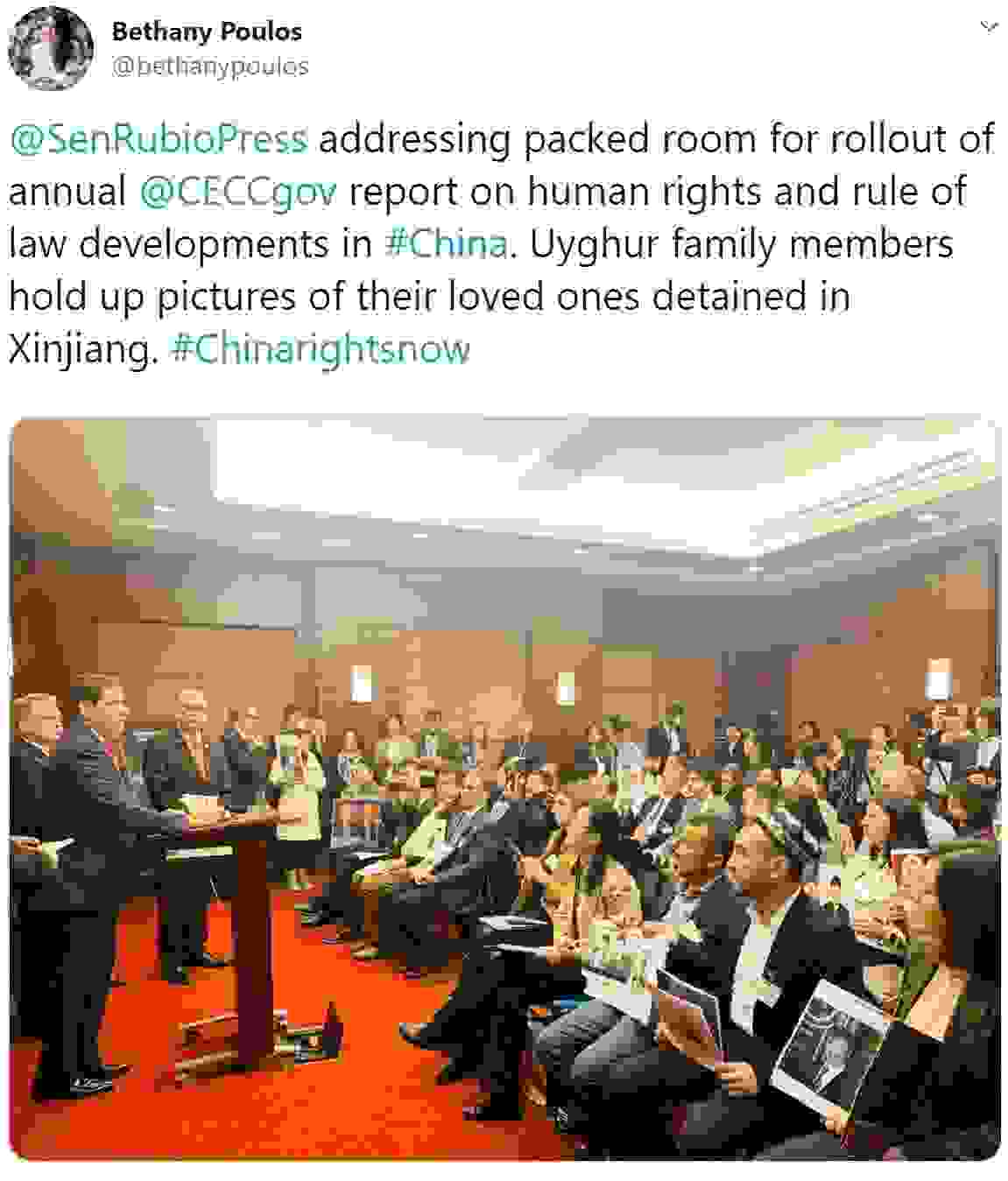 IPVM's article Evidence Of Hikvision's Involvement With Xinjiang IJOP And Re-Education Camps was cited by the CECC: 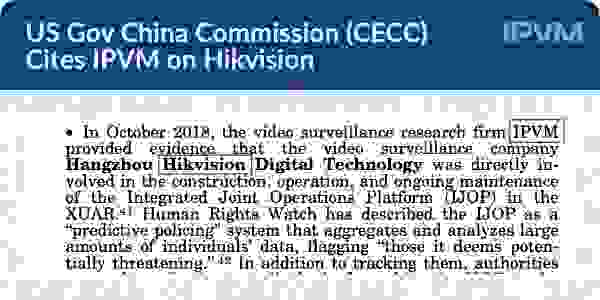 Hikvision Called Out Many Times

In total, the CECC report mentioned Hikvision almost two dozen times, indicating the firm has become the one of the most visible symbols of Chinese government surveillance/rights abuses. In one passage, the CECC even used Hikvision as an example of businesses being complicit in "egregious human rights violations": 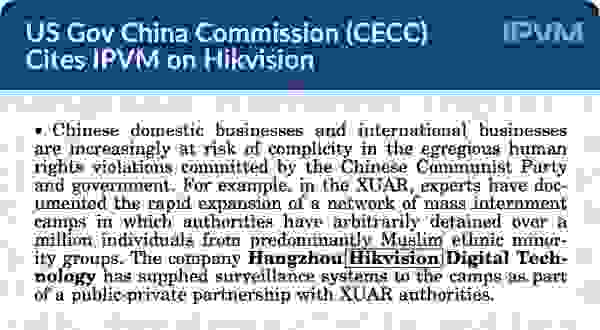 Tiandy Called Out As Well

The CECC mentioned Tiandy three times for selling "technology to Chinese authorities", stating "the government uses this technology to surveil rights advocates and others the government views as threats." The Tiandy mention is due to a Bloomberg report noting that Tiandy's founder is now a billionaire.

Impose Global Magnitsky sanctions on both Chinese government officials carrying out severe human rights abuses in the XUAR as well as the companies directly complicit in those abuses.

Magnitsky sanctions are much tougher than the current sanctions in place against Hikvision; if passed, they would terminate Hikvision's USA presence altogether.

The CECC also recommends updating the ban on US firms selling China "crime control" equipment that was passed after the Tiananmen Square massacre. This would make it much harder for US companies to supply any Chinese surveillance firms, not just the ones sanctioned over Xinjiang like Hikvision/Dahua.

Hikvision told IPVM they decline to comment on the CECC report.

The CECC report is bad news for Hikvision, indicating that the company has become a prominent example of PRC government surveillance in Xinjiang; notably, Dahua was not even mentioned in the report although it also has extensive Xinjiang activities.

More broadly, if the report's recommendations are acted upon, even further restrictions on US business with Chinese security companies could very well be placed in the future. Considering these issues are anchored in human rights rather than technical/cybersecurity concerns, they are unlikely to go away anytime soon.

IPVM For PR / Marketing People on Apr 29, 2020
Since IPVM does not accept advertising nor sponsorships, etc., PR / marketing...
IPVM's 12th Anniversary - Thank You! on Apr 07, 2020
IPVM is proud to celebrate it's 12 anniversary expanding our commitment to...

If only Hikvision executives were sanctioned (and the company itself was not), I haven't a clue how that would affect things.

If only Hikvision executives were sanctioned, the impact wouldn't be nearly as severe, and would amount to more of a PR problem. However, that specific option has never been floated before. And the Magnitsky legislation is clear that companies as well as persons can be sanctioned.

Next time you're at a business that has Hikvision cameras installed ask them what they know about it, in my experience it is next to nothing. One business in particular, Mike's Carwash to be precise, merely covered up the Hikvision logo after we asked them about it!

One business in particular, Mike's Carwash to be precise, merely covered up the Hikvision logo after we asked them about it!

OEMs should be pissed. The Car Wash is stealing their business model.

Any guess on the likelihood of the Magnitsky sanctions actually being imposed?

Good question, but the likelihood of Magnitsky sanctions on Hikvision is very difficult to predict. The President/Congress are under no obligation to act upon the CECC's suggestions. My (subjective) guess is that this unless we see a significant escalation in US-China tensions, or a substantial worsening of the (already very bad) Xinjiang situation, this option remains unlikely although still possible.

I think it's much more likely that Magnitsky sanctions are first imposed on Chen Quanguo, the PRC official in charge of Xinjiang, and his direct associates.

From various conversations I had last year, I think there was some moderate, if not significant, part of the day-to-day security industry population that felt Hikvision was going to avoid any long-term impacts from the sanctions and scrutiny. It seems there was an opinion that felt Hikvision was "too big to fail" in a way, and through lobbying/etc., would get through this, maybe weakened and chastised a bit, but more or less in tact.

The pressure not only seems to be not letting up on them, but is increasing, or at least maintaining strong momentum. By extension, I think we may start to see some increases in R&D spending and new product releases at other security industry companies that have clawed back some revenue and margin now that they do not need to compete so directly with Hikvision, et al.

Overall, I think that 2020 will be a potentially good year for any security industry product that is not built around Huawei components.

Anyone using the FAV button?

Honeywell/Resideo has/ had substantial sales into the PRC wonder what they are doing about this. Another spin off?

Validation such as being cited by a government report that addresses human suffering must be a very rewarding aspect of IPVM's effort. That's the kind of reward not even money, or Mastercard, can buy. Congratulations, John.