Caught on Camera: Slipping on a Banana Peel 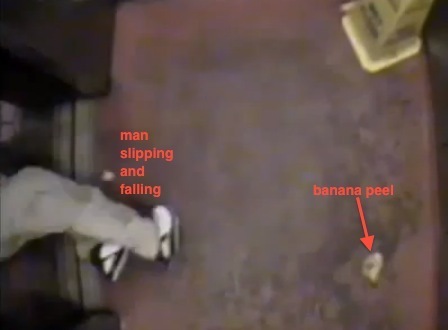 Fradulent slip and fall is a serious liability problem. One major retail operator told us that it was the number one reason the store had cameras.

Washington DC's transit agency, WMATA was sued by Maurice Owens for $15,000 after he says he slipped and fell on a banana peel while leaving the elevator at a Metro station. Part of that he says was to cover $4,500 in chiropractor bills. Here is a video of the incident from a surveillance camera in a metro elevator:

The Old Banana in the Pocket Trick

The case was thrown out, and Owens was charged with fraud. If you look closely in the video, there is nothing on the floor when he gets in the elevator car, then there is something on the ground that WMATA identified later as a banana peel. Owens looks up toward the camera several times during before dramatically falling out of the elevator car as he exits.

Bananas are slippery, as Mythbusters shows in the video below, but bananas are also bright yellow, in contrast to the dreary brick and gray colors of the Washington metro system.

It's not a surprise that Metro sees so many claims every month as DC's system is known for having wet stairs from rain, broken escalators and cracks and holes in the floor tile. The issues are usually fixed fairly within a day, but not before hundreds of commuters have passed over the area. With all those other opportunities, it's a mystery why Owens chose a banana peel if he was trying to fake a fall.