UPDATE 2020: We dropped Divvy after numerous problems and poor support, explained and updated within.

Most security integrators are small businesses but large enough that they have various employees that need to be able to expense various charges as they do their business (whether for supplies, travel, etc.).

IPVM has used a number of options and recently settled on Divvy, a startup that is offering an alternative to conventional cards. Indeed, we first saw them at ISC West earlier this year when we captured a video of a guy with a suit made of dollar bills:

However, we did not choose Divvy at that time. Instead, we chose Capital One Spark, but it had problems for our needs, so a few months ago, we switched to Divvy. Inside this note, we examine the pros and cons of these various options.

UPDATE MARCH 2020: We have shut down using Divvy after numerous problems and poor support.

Note: like all IPVM reporting, we never accept advertising, sponsorships, affiliates, etc. We are posting this because it solved a problem for us and may do so for our members.

Debit cards from one's bank is generally the simplest option for assigning cards to employees. However, debit cards typically do not offer any rewards (cash back or points) where most credit cards do. In particular, our bank made it difficult to assign / issue new cards. And some businesses (most notably car rentals) refuse to accept debit cards, causing operational issues.

Capital One, at least from online searches, appears to be quite popular (that or good with marketing).

Our experience with Spark was mixed. On the plus side:

The Capital One account is tied to a single person's Social Security Number, with only one log-in available per company, and no option to give others management or even viewing access. Spark also does not offer virtual card and budget management. Moreover, any major changes to the card or account required the intervention of the single person on file, which would be fine for a solo entrepreneur but restrictive for any business with multiple people performing administrative or financial work.

By contrast, Divvy lets every employee have a login and the company flexibly assign who are administrators. The administrators can then easily see what is being spent, make adjustments, etc. The employees can associate receipts and other information, making expense management easier. Divvy, though not as high as others such as Capital One, still has a 1% rebate.

Additionally, Divvy assigned a personal account manager for us, which provides continuity and a clear point of contact rather than calling up a general customer support phone line.

Like others, Divvy issues physical cards to all users (MasterCard) which are used just like any other card. However, unlike most, Divvy allows users to create virtual cards on the fly. These cards may be used once, shut down after a certain period of time, or simply indefinitely like any other card.

This allows users to assign virtual cards to specific things, e.g., one card is used for Amazon purchases, one is used for Home Depot, another is used for cell phone bills, etc. This has several benefits:

Divvy also offers mobile and web apps which allow users to track expenses, assign them categories, add notes, and upload receipts (taken directly with users' mobile phones, scans, or PDFs). If a user makes a purchase using their card, the mobile app can be set to prompt them to add a category or notes in order to encourage better documentation.

UPDATE (January 17, 2019): Users can now change categories and add notes to their transactions in the web interface. Previously, that function was limited to admins only and users were only able to do so within the mobile app. 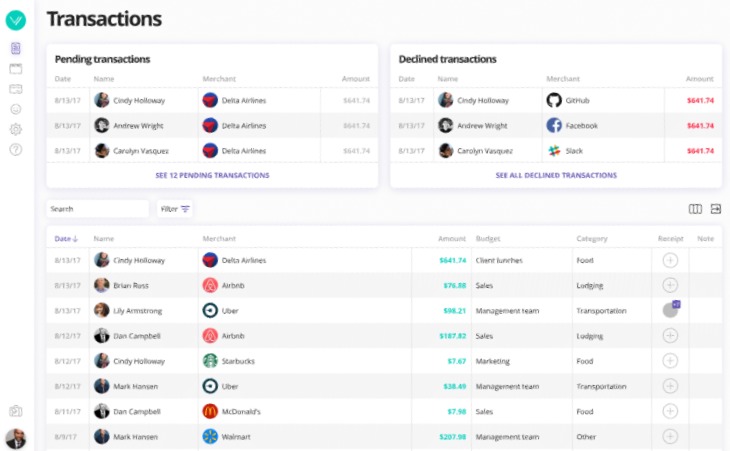 Features of the desktop app are similar to mobile, though it contains additional admin features for creating users and budgets, as well.

There are several drawbacks to dealing with a startup like Divvy compared to more established banks. 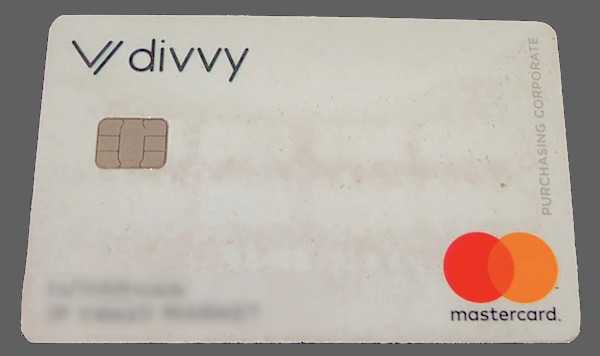 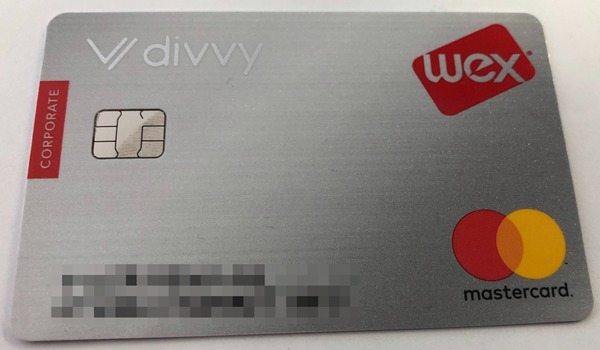 We have left Divvy due to numerous issues and poor support. We do not recommend using Divvy.

Near the end of our first year with Divvy, they claimed we would not get 1% cash back because it was not in the fine print of our contract despite them repeatedly assuring us that it was. We had to threaten to cancel to get them to relent.

Rewards redemption was slow and cumbersome. They forced you to fill out a 3rd party form. Then, they still showed as available for redemption on the Divvy dashboard for almost a week. We had to reach out to support to confirm that our redemption request was received. This happened repeatedly.

One of our staff repeatedly had their card blocked while traveling due to multiple out-of-state and international transactions and we had to contact support to unblock the card.

Worse, multiple fraudulent reservations for hotels in Bali and Malaysia on a card belonging to an IPVM staffer who doesn't travel were not flagged as suspicious. We had to reach out to Divvy and freeze the card. Then we had to wait for the fraudulent charges to post before disputing them. We were told that the dispute investigation would take 60 to 90 days, after which we may receive credit. After several days of escalation with Divvy, we were issued a provisional credit for the full amount.

We have now switched to the Stripe corporate card, which is superior in three ways: better receipt management (text messages for new purchases allow texting an image back to post the receipt), automatic rewards redemption, and our IPVM wordmark on our credit cards.