Canon has gone from nothing to arguably the most powerful video surveillance manufacturer in 8 months.

All they had to do was spend $3+ billion USD to get there.

Where is Canon coming from? How are they doing in their existing core businesses?

The answer is pretty bad. In this note, we examine Canon's 2010 - 2014 financials and the problems they face.

The past 5 years have witnessed explosive growth for consumer electronics, IP cameras and other network devices. Canon has not been able to participate in this.

Indeed, over the past 5 years, revenue and cash flow have been flat to down:

In imaging, Canon has been flat to down for the past 5 years: 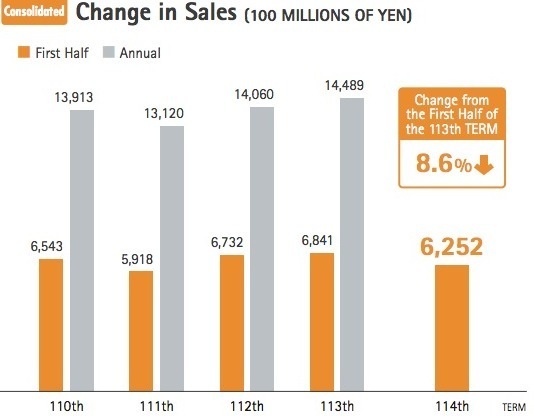 As a matter of fact, Canon places network cameras in their 'industry and others group', which has struggled even more over the past 5 years. However, Canon in their 2014 interim report noted,

"As for network cameras, we enhanced the product line-up by launching new products that are suitable for a variety of indoor environments at the end of 2013 and achieved sales results that significantly outperformed the growth of the market."

That is coming off an obviously low base but, more importantly, now with Axis, that becomes redundant anyway.

Unsurprising, for a struggling company, Canon put heavily blame on the world economy for their poor performance, despite consumer electronic competitors like Samsung and Apple surging during the same time period.

On the camera side, Canon emphasized that:

"Demand for interchangeable-lens digital cameras continued to face harsh conditions due to the economic slowdown. As for digital compact cameras, demand continued to shrink in both developed countries and emerging markets."

Canon was simply unable to innovate to deal with the obvious and inevitable shift away from traditional cameras to Internet devices / smartphone / cameras. If they could not deal with that, how does Canon expect to do so given the challenges IP surveillance now faces?

Innovate with Axis and Milestone?

Based on their track record, it is hard to understand why Canon will start innovating now. The company appears to be relatively risk-averse and unable to push through big changes.

Yet now, they have bought into a market (IP surveillance) whose growth rate is precipitously declining and who is under attack by low-cost Chinese manufacturers that they match up poorly against.

It's impossible to imagine that Canon can run Axis and Milestone independently more effectively than the two ran themselves.

The big opportunity is to merge the two together into a 'super Avigilon', to increase cross-selling and cut operational costs. But will Canon really take such a big risk in trying to put the two togeher? Can they actually implement such a difficult and painful transition?

So far, the statements have all been to run the two independently, which is an incredibly uninnovative thing to do, but fully in line with the poor results of Canon for the past 5 years.