Camera vs Server Side VMD 2012

The question of whether to run motion detection at the camera or on the server is fundamental to IP surveillance systems, and occasionally hotly debated. This a complex topic without a clearcut "best". In order to clear some of this confusion, we asked respondents to our Spring 2012 integrator survey the following question, to find out what is being deployed in the field and why: 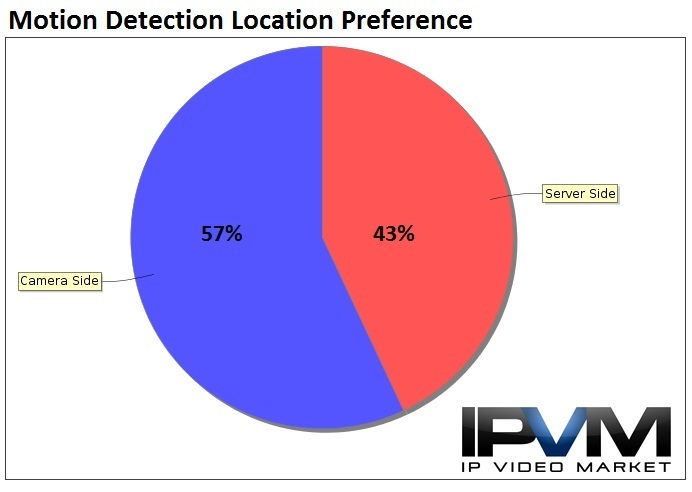 Responses were close to evenly split, with moderately more integrators preferring camera-side motion detection (57%) than server-side (43%). Much of this is due to the tradeoffs to both approaches, which we review below.

There are several potential benefits to using camera-side motion detection:

The most commonly-cited benefit of configuring motion detection on cameras is the reduction of server load. Since motion processing is moved to the edge, more processor is available for other functions. Depending on the VMS, this may allow more cameras to be run on a single server, or a smaller server to be used for the same number of cameras, reducing costs.

Some cameras may be set up to send video frames only when motion is detected. This helps to reduce bandwidth and storage needs, as unnecessary data is not sent. This may cause issues, however, if motion detection zones and thresholds are not properly configured, as the camera may not trigger and send video during actual events. Some users prefer to use motion boost recording because of this, recording low frame rates or bitrate continuously, and increasing upon alarm. Note that motion boost recording is not strictly a camera-side function, but may be used with server-side motion detection, as well, dependent on the VMS.

Consistency is the main advantage to server-side motion detection. Regardless of camera type or capabilities, when motion is performed by the VMS, all cameras are configured in the same way. Some VMSs allow motion settings to be copied from camera to camera, as well. Both of these serve to reduce installation time and complexity, since multiple user interfaces need not be learned and managed to set motion detection across multiple camera manufacturers.

While cameras fail far more frequently than servers, a server failure is more catastrophic than a camera failure since failing servers will wipe out settings from many cameras. As such, this is hard call that ultimately depends on personal preference.

For instance, proponents of both claim more flexibility in motion setup:

Taking these factors into account, users should be aware that motion detection performance is highly subjective. Due to the number of variables involved, users should test and understand the performance of the platforms they are deploying.