Do you realize that your camera can power and integrate PIR sensors, accelerometers, lights, sirens and strobes?

Camera input/output ports make direct integrations with other devices simple. Even though camera output voltages are modest - less than 5 VDC, they allow direct connections with components like alarm sensors, lights, strobes, and even high voltage machinery. In this note, we look at camera output power and examine its usefulness in security designs.

Some useful integrations / applications you can accomplish that we examine inside include:

Input/Output ports are common to many cameras, but not often used. Most major camera manufacturers include I/O ports on their offerings, and many even include them on 'entry level' budget models. The image below shows examples of how these ports look and where they are typically located:

As we noted in our Inputs/Output Tutorial, these ports are underutilized features in many deployments due to uncertainty of how to use them. One of the most useful attributes of these ports is the least understood: output power. In many cases, there is a small amount of voltage from the camera available to auxiliary devices. The voltage is useful in two ways: directly powering connected devices, or powering relays.

The output feature is available in the same bank of ports as the input pins. Therefore, individual pins in the port behave differently; the standard configuration for Axis cameras is shown below: 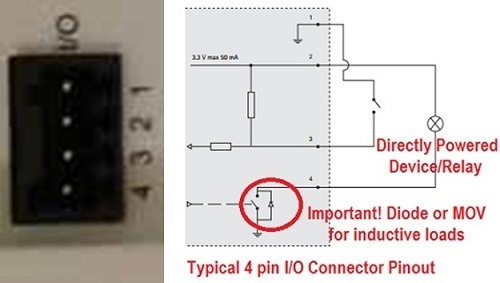 Of note, pins #1 and #3 act as 'Inputs' triggered by contact closure, while pins #2 and #4 act as 'Outputs', providing power to an external device. According to the pinout, the voltage available to power external devices is limited to '3.3 VDC max at 50mA'. Most cameras output power approximating this range, between 2 - 12 VDC, and seldom more than 75 mA.

Frequently a single device is connected to all four pins. In this way, a device like a motion sensor can serve both as 'output powered' by the camera, but also as an 'input sensor' that triggers the camera. When directly connecting devices for power to the camera, most manufacturers suggest adding a diode or MOV to one of the output pins. This electrical component dissipates small but damaging currents cause when a device turns on or off.  Even small inductive loads, like a solenoid or a lightbulb filament, create these voltages and the diode must be included to prevent electrical damage to the camera over many cycles.

The usefulness of the output voltage depends of how devices are connected to the camera. In the sections below, we look at both sides, first 'Direct Powered' devices, and then 'Relay Switched' devices:

Using a camera's output voltage to directly power a device is the less common method, simply because the available power is so low. Most devices are built to use voltages and amperages well above what a camera provides. However, specialty electrical components like sensors can fail within the range. For example, some PIR Motion sensors like the Optex BX-80NR or Paralax 555-28027 are designed to use small amounts of power. 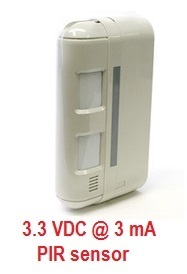 This particular sensor uses only a portion of the available 50 - 75mA coming from the camera, and multiple sensors can be connected to a single camera. While we have not tested the integration, several IPVM members [link no longer available] have mentioned using this sensor with success in several deployments.

In other cases, other lightweight sensors can be connected. Take this example accelerometer: 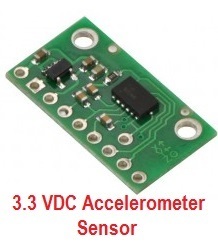 This particular sensor could be used to detect the swing of a door, or even the movement of a valuable object, and is suitable to connect directly to the camera's I/O ports.

However, the greatest and most flexible use of a camera's output power comes when using it to control a relay. Electrical relays are essentially switches designed to make electrical connections on a conditional basis. They behave one way when unpowered, and differently when powered.

One common property of relays are they even when low voltages are used to control them, they can route and switch much higher voltages. In terms of surveillance cameras, a small 3.3 VDC output voltage is useful for controlling devices consuming 120 VAC, 220 VAC, and greater amounts.

The small output voltage of a camera is sufficient enough to cause the internal contacts within a relay to change state, thereby completing an electrical circuit. In this way, 3.3  VDC is useful for controlling high voltage lighting, sirens, strobes, and overhead door motors, and even industrial machinery.

The image below shows an example of how the relay is typically installed inline with the positive (+) leg of the voltage circuit, with the 'relay coil' energized by the camera outputs: 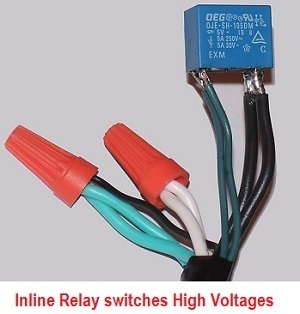 The total cost of connecting a camera and relay in this way is less than $10, using commonly available relays.

However, for those not inclined to specify relays and solder components, products like CamIPElec [link no longer available] (essentially factory assembled, relay switched extension cords) cost about $110. This product allows power to high voltage devices to be switched on by the camera's output power: 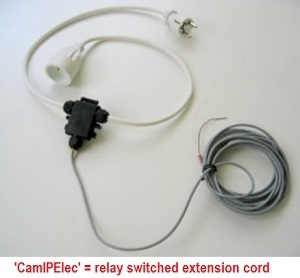 Using relays opens up the entire range of powered devices that can be triggered by a camera. Even devices requiring significantly more electricity than the low voltage DC source can be programmed to turn on or off based on logic rules assigned in the camera. 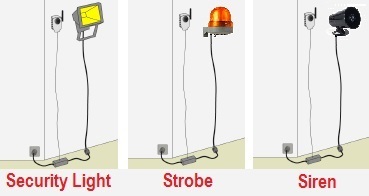