Camera installation is fundamental to the security industry, but in many cases, little thought is given to planning and installation, leading to system which perform poorly and look unprofessional. As an example, see this photo: 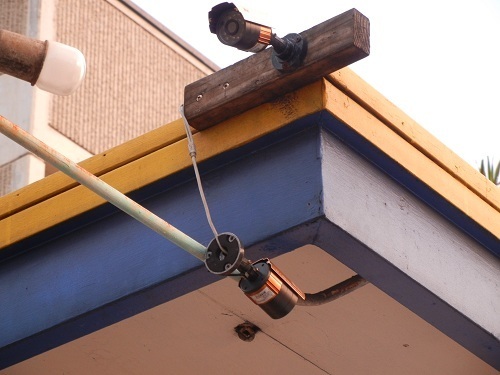 Not only does this installation just plain look bad, this mounting "style" and exposed cables are bound to have an impact on performance.

In this report, we will look at numerous real world installation photos, analyzing the positives and negative of each. We cover topics including:

Though it may not be possible in every instance, concealing wiring and penetrating the wall or ceiling is preferred. Since no wires are exposed, it provides better aesthetics and security than other options. It is also generally the simplest (though not necessarily easiest) method, as cables are fed through the penetration to the camera, without worry of conduit or exposed cable. The main drawback is that the wall or ceiling must be penetrated. This may be challenging or impossible in some buildings, depending on age and construction, requiring cables to be run exposed, or placed in conduit.

Looking at some good examples of this method, first is a dome, mounted flat to the wall, with all cabling concealed: 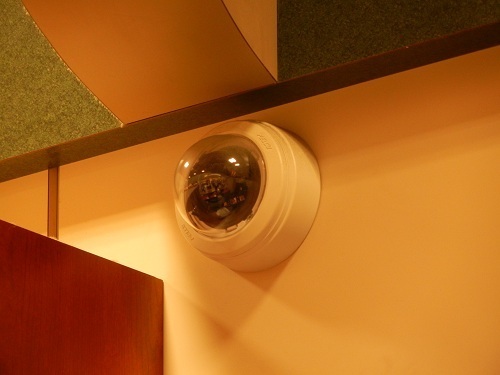 Note that this mounting style is generally only possible when using cameras with 3-axis gimbals. As we discussed in our dome camera installation issues overview, 2-axis gimbals do not allow for the same freedom of movement, and may not function well when mounted flat to a wall. 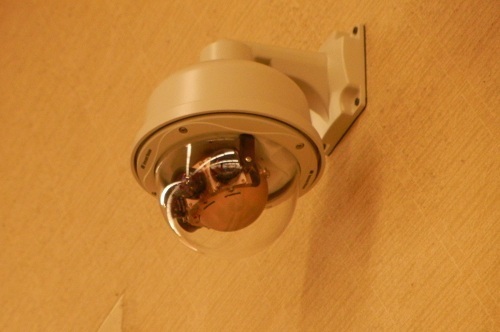 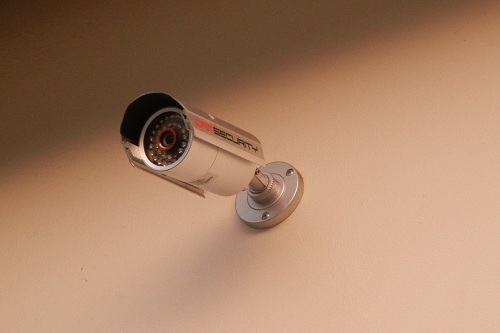 This type of mount may also be found in more modern box camera housings, such as the Videolarm Fusion and Axis P-E series cameras. Not all box camera housings allow for through-mount cabling, requiring a small junction box and short piece of flexible conduit to be installed on the exterior of the wall: 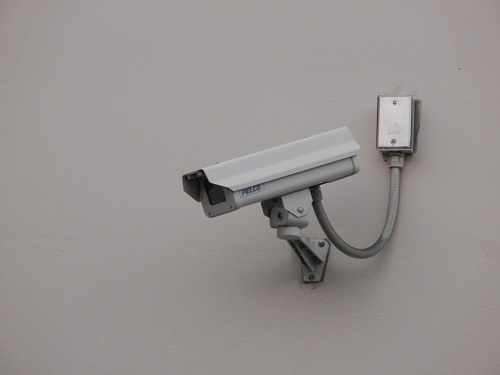 This box should be gasketed and weatherproof, to avoid moisture ingress to the camera enclosure.

When concealing cable in the ceiling, the entire run should be concealed. For example, by moving this minidome over an inch or two, or penetrating the ceiling tile, the short length of exposed cable could have been avoided: 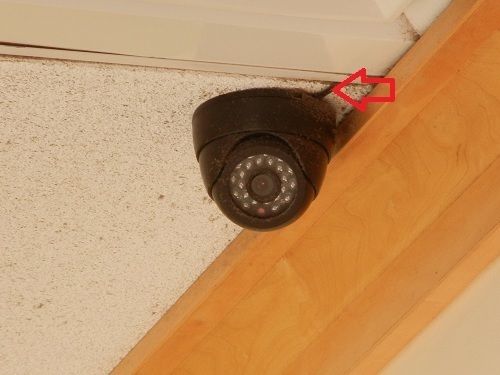 Not only does this look sloppy, the cable is likely pinched between drop ceiling tile and ceiling grid, degrading performance.

Using recessed-mount domes, such as the photo below, is preferable in most cases, as the cable need not penetrate the ceiling, but these are not always available or practical, such as in shallow ceilings. 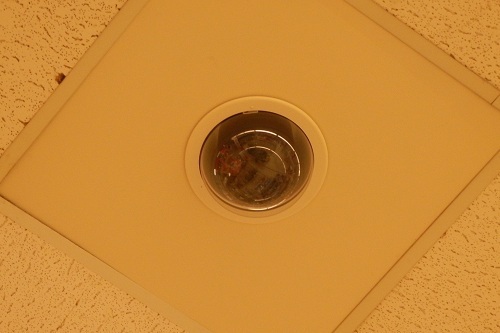 This recessed mount replaces an entire 2'x2' ceiling tile, which adds to material cost, but avoids concerns of breaking or damaging the tile during installation.

When using box or bullet cameras in drop ceilings, a short length of cable must be left exposed, as it exits the ceiling and connects to the camera. Care should be taken to keep this length as short as possible, for aesthetic and security purposes, as low-hanging cables may be prone to vandalism or cutting. Take for example this bullet camera installed to the drop ceiling in a fast food restaurant, with excess cable slack: 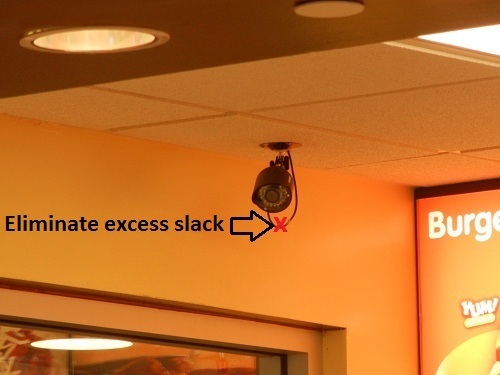 Versus this second camera with only a short slack loop: 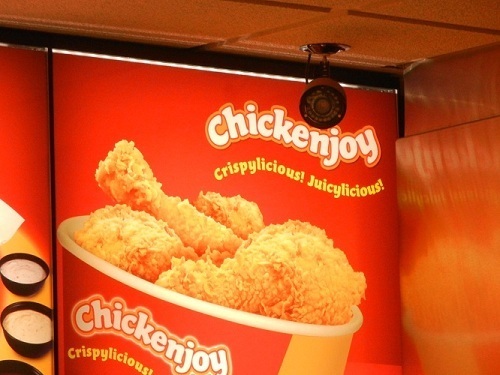 When cabling cannot be concealed, it must be run exposed or in surface raceway. For the most part, raceway, whether conduit or Wiremold, is preferred, as it provides some protection from harm, and lends a neater appearance. However, in areas with open ceilings or with exposed trusses, raceway is unnecessary. In either case, the following recommendations should be followed.

Much the same as when using concealed cabling, leaving portions of the run exposed and accessible is bad practice. If the entire length of the run is neatly contained and secure inside of conduit, it makes little sense to expose the cable to environmental issues and vandalism at the end of a run. This photo illustrates this bad practice: 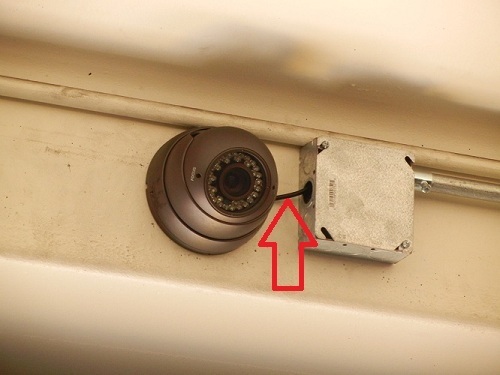 To avoid this, many models of dome camera mount to electrical boxes, either directly, or via adapter plates, in many cases included with the camera. If these features are not available, users may also mount the camera to a blank box cover, drilling a hole where necessary for cable access. This camera is an example of mounting directly to an electrical box: 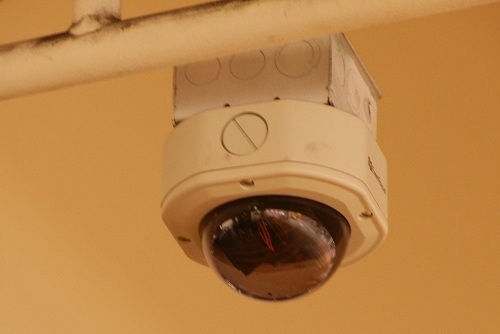 Flexible conduit is preferable or necessary in some instances, such as this example connecting a junction box to a camera: 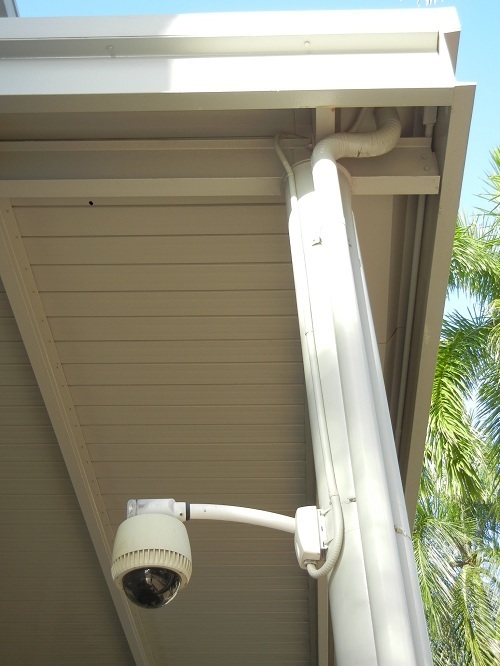 However, since it is flexible, it tends to look sloppy when used in greater quantities, for longer runs: 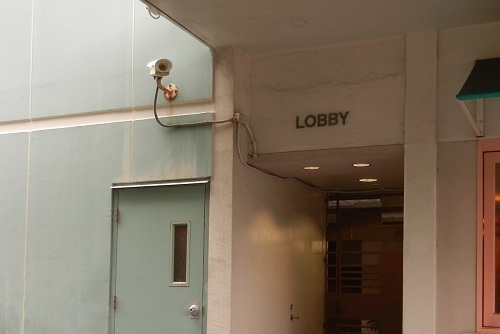 Additionally, flexible conduit must follow the same rules as solid EMT or PVC conduits, and should terminate in the camera. For example, in this photo, the end of the flex is exposed: 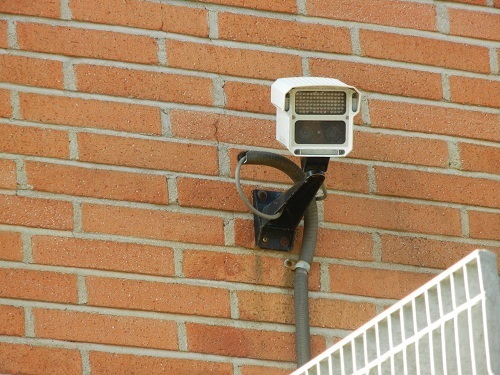 What is not shown in this photo is this piece of conduit running directly into an equipment box below. In this situation, the cable essentially assists in drawing rain water and moisture from the air into this enclosure, potentially damaging equipment.

The size of conduit used should be calculated based on the number of cables which will be installed in it. In the US, National Electrical Code dictates that conduits should be no more than 40% filled. In 1/2" or 3/4" conduit, often used in surveillance systems, this generally means only about 1-4 UTP cables may be installed [link no longer available].  Installers should be conscious of conduit fill, as some local authorities may see it as a code violation, and require work to be redone.

When cable is run exposed, proper supports should be installed. For exposed cabling, J-hooks are most often used. Cables should not be tie-wrapped to conduits, sprinkler pipes, or drop ceiling wires (though specialized J-hooks may be supported via drop wire). Some installers use specially made cable staples for individual cables. While not specifically prohibited by any standards, these are frowned upon, as they may compress the cable jacket, or accidentally penetrate the cable. 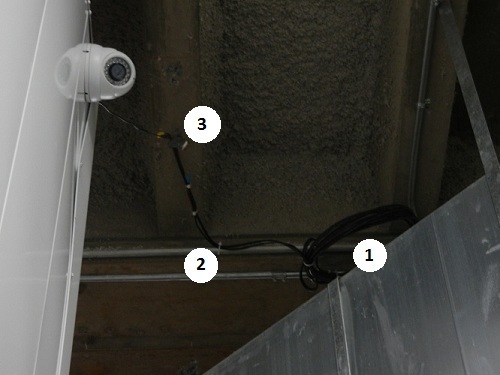 First, the cable slack loop is left sitting upon the HVAC ductwork, instead of being properly supported. Second, the the cable is tie-wrapped to conduit, and finally, it is supported only by draping it over building structure en route to the camera.

In areas with very tall ceilings, conduit is often used to suspend the camera at a more workable height. This is is most often via specialized fixture hanger boxes. This is shown in the following example photo from a retail store: 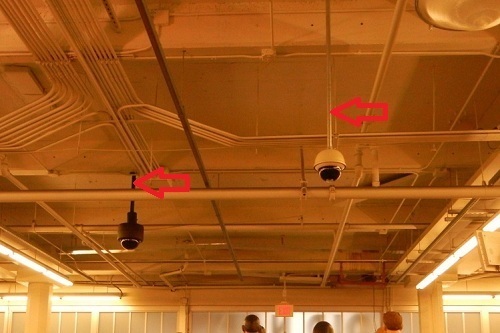 Note that in this case, the conduit is run vertically only, with no bends, and is intended only to support the camera. In the example below, the installer has transitioned smaller threaded conduit used to run cable, directly into the camera, using reducers and 90º bends: 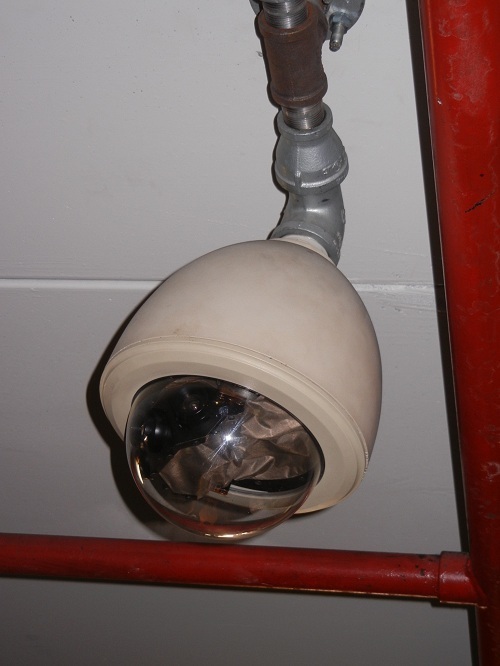 In this situation, the conduit must support the full weight of the camera. Additionally, camera stability issues may arise if the conduit should vibrate. Lastly, no access to camera connections is available, as a junction box would provide, meaning that the camera must be removed in order to check connections or service it.

Unicorns: Techs Good At Access and Video, Says Access Panel on Jul 01, 2021
Installers good at both access and video are mythical 'unicorns' according to...
Outdoor Camera Installation Guide on Mar 25, 2019
Outdoor camera installation can be fraught with problems. Creating a sturdy...
Four Major Outdoor Camera Install Problems on Jun 14, 2018
Over 140 integrators told us the top four camera installation mistakes that...
Comments : Subscribers only. Login. or Join.