Bandwidth consumption can vary tremendously, even with the same resolution, frame rate, compression and scene, by 50% to 80% in our tests. This is because cameras process video differently (e.g., gain control applied, noise reduction technology, etc.).

We tested 16 cameras head to head to understand who is the best and worst at minimizing bandwidth consumption / storage costs.

Additionally, we tested 6 integrated IR cameras to match up against these.

The simple, naive and wrong way is to put cameras side by side, measuring bandwidth at the same resolution and frame rate.

Why? The default compression settings of cameras vary widely by manufacturers. Though compression is often overlooked, every H.264 camera must choose a Q or quantization level (from 0 to 51). The lower number chosen, the higher the bandwidth, and the greater the compression (to learn more, see our IP Camera Manufacturer Compression Comparison). This does not make one camera 'better' or 'worse' and can be adjusted by the user.

To truly and fairly measure bandwidth, compression levels must be normalized, that is, they must be set the same. Using a stream analyzer, IPVM determined the actual quantization levels and adjusted the appropriate scales so the quantization levels all would be the same for our tests (using Q=28).

Here are our key points from this test, with all cameras standardized to a framerate of 10 and quantization averaging between 27 and 30:

Our first scene was our typical indoor conference room, at about 160 lux, with a field of view seen in this image: 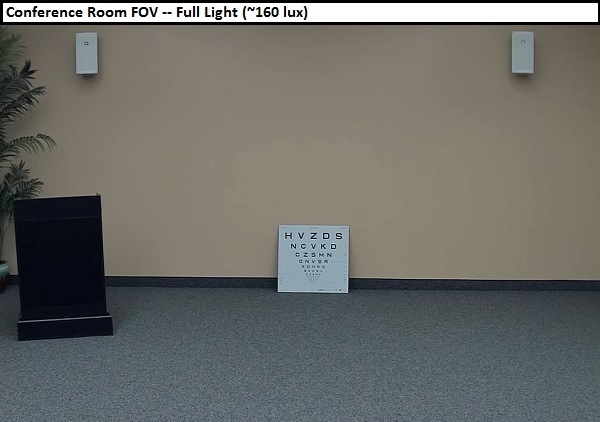 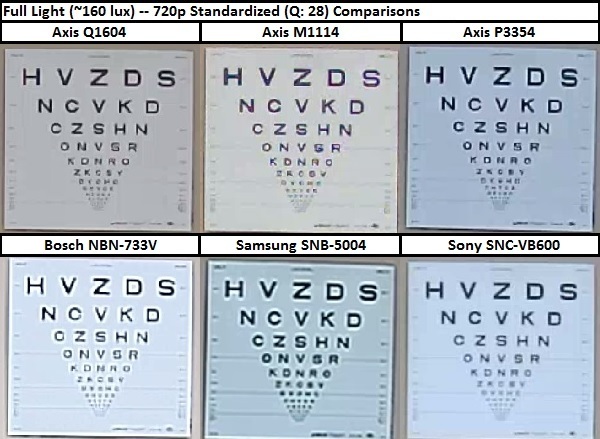 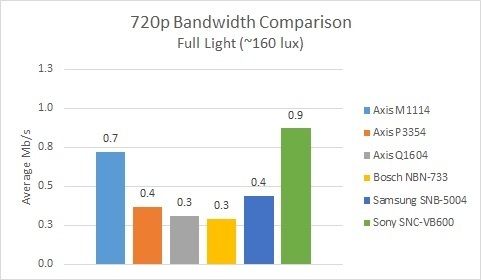 The average of our four 1080p cameras was about 1.5 Mb/s, with a single outlier, again the sixth generation Sony, SNC-VB630, with bitrate over 3 Mb/s. 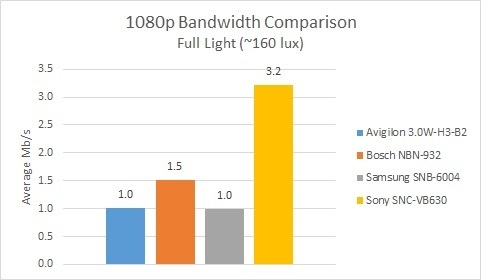 We lowered the lights to ~2 lux to check differences in bandwidth as gain and noise increased, seen here: 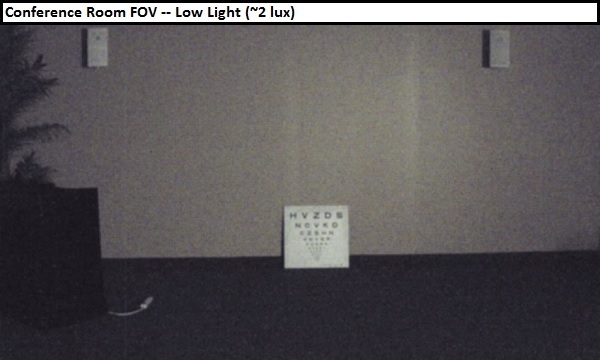 At this light level, bitrates were quite consistent, ranging only between 1.0 and 1.6 Mb/s, with an average of about 1.3. 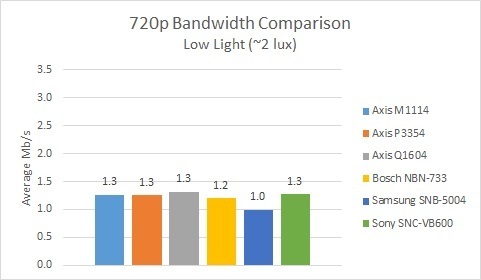 The 1080p cameras tested were also much more consistent at 2 lux, with no drastic swings high or low, and an average around 4.5-4.6 Mb/s. 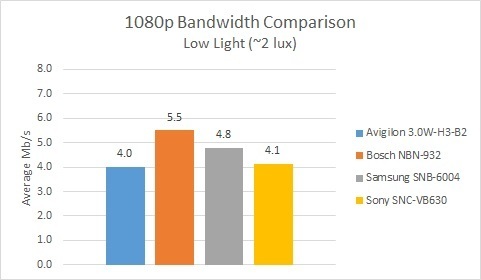 In our final indoor shot, we lowered lights to about 0.1 lux to test bandwidth performance in a truly dark scene: 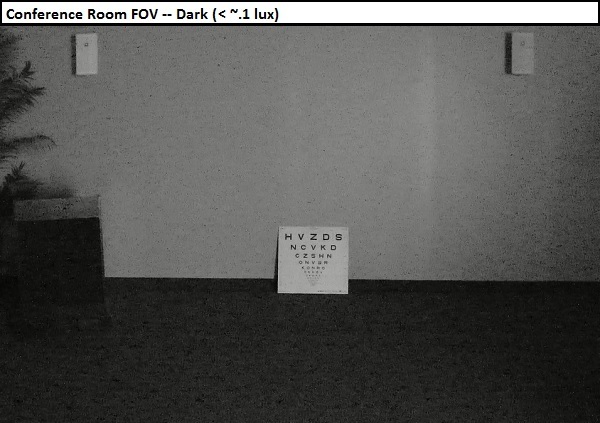 The comparison below shows all cameras at this light level to display comparative performance, brightness and noise in the scene, first 720p: 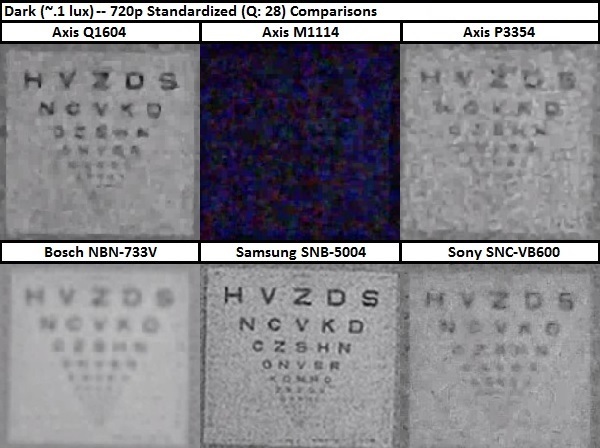 720p cameras in this scene averaged about 3.7 Mb/s, with the only true outlier being the NBN-733V, which averaged 1.6 Mb/s, 1-3 Mb/s lower than other cameras. Note that the Axis M1114 was relatively low in this scene, though delivered no usable image, nearly black. 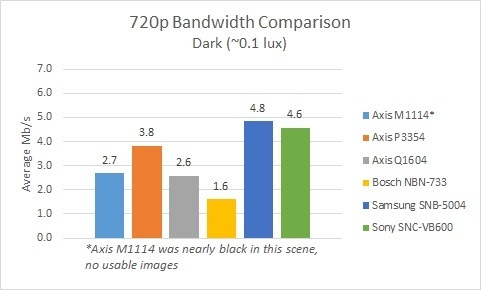 1080p cameras varied from 7.8 to 13 Mb/s in this scene. The Avigilon 3.0W-H3-B2 was nearly black at this light level, accounting for its much lower bitrate than other cameras, which all produced usable images. 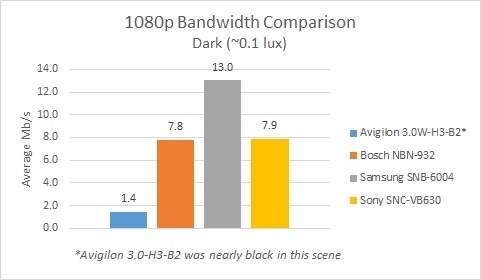 To measure bandwidth in a high-motion scene, we set up the cameras next to a busy roadway, seen in this image: 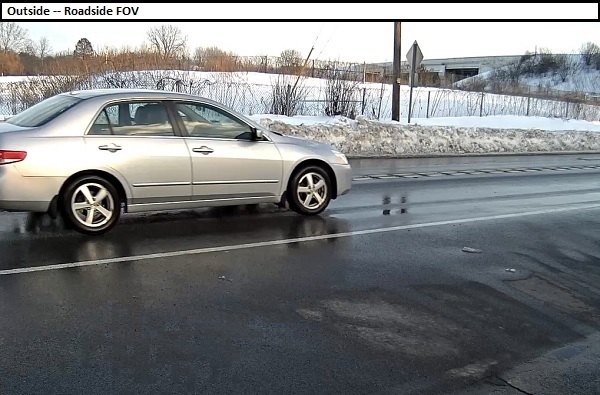 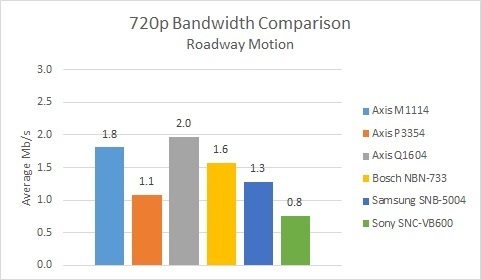 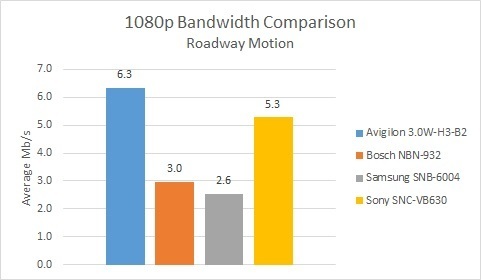 We tested six integrated IR cameras at 720p and 1080p resolutions to see how much average bandwidth varied among them and versus day/night cameras in the same scene. This image shows the FOV in the dark, with IR on: 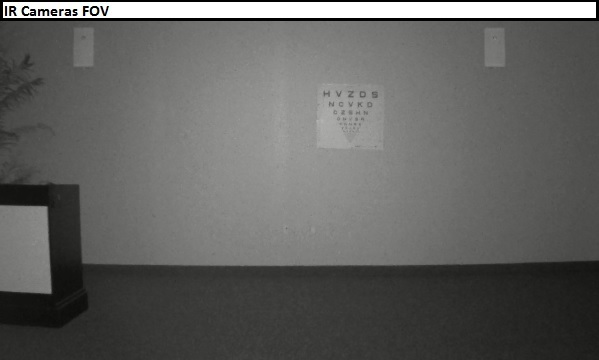 And this image compares all 720p cameras, showing the relative IR power and noise levels of each:

At 720p, bandwidth averaged about 1.6 Mb/s. The Axis M1144-L was substantially lower than other cameras, at 1.1 Mb/s, versus 1.8-2 for Geovision and Q-See. Notably, this average is much lower than the day/night cameras in our tests, which averaged over 3 Mb/s, with only the Bosch NBN-733V on par with or lower than 720p IR counterparts. 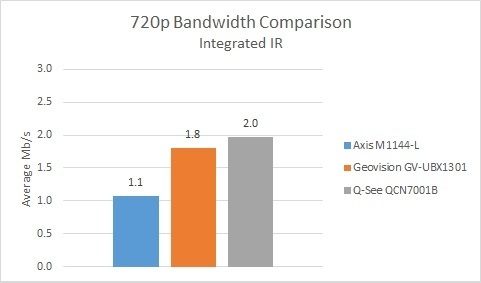 The Avigilon 2.0W-H3-BO1, at 6.3 Mb/s was substantially higher than Dahua and Hikvision 1080p integrated IR cameras tested, especially interesting given their superior IR performance. As with 720p, 1080p integrated IR bandwidth is lower in all cases, with the exception of the Avigilon 3.0W-H3-B2. Its bitrate was only 1.4 Mb/s, though it delivered no usable images. 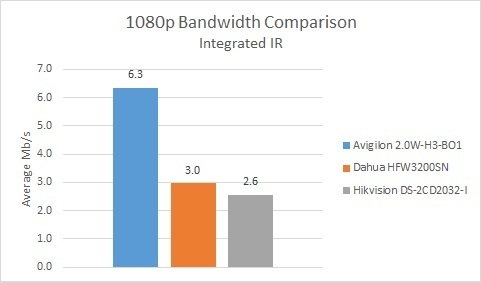 A few cameras defaulted to much different quantization levels than what we standardized to in this test. The Bosch NBN-932V and Samsung SNB-5004 were the worst examples of this, with reductions of ~80% when changing from default settings to our standardized quantization levels of 28-29. The differences for these and other cameras are shown in the chart below.

These figures further drive home the point that non-standardized bandwidth testing is likely worthless. Unboxing cameras from manufacturers below and immediately testing without standardization will drastically skew results, as bandwidth and storage needs will be much greater than some competitors, such as Axis, who default to higher quantization levels.

These are the settings used for each camera in order to achieve an average quantization of 28: 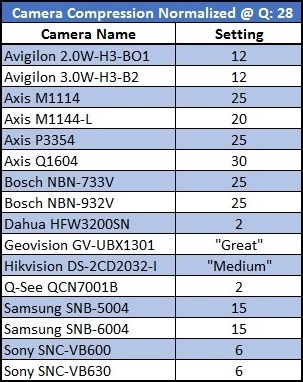 Since the majority of surveillance systems record only on motion, VMD performance, specifically false positive rejection, may have a huge impact on storage needs. In our tests, we found that advanced motion detection testing that packages such as Axis VMD 2.0 and Mobotix MxActivitySensor reduced false positives from unwanted objects, as well as noise caused by increased gain, in nearly all scenes tested.

Users should also see our tests of standard VMD from seven camera manufacturers for more performance information. Performance of each manufacturer varied depending on the scene, so these reports contain our recommendations for each:

Genetec and Milestone 500 Camera Recorders Announced on Apr 05, 2016
The megaserver era has arrived? VMS manufacturers Genetec and Milestone have...
H.265 IP Cameras Tested vs H.264 on Jan 18, 2016
For more than 2 years, anticipation has been building for H.265 IP cameras....
Favorite Large System Cameras on Aug 03, 2015
For large systems, with over 100 cameras, we identified the most preferred...
Testing Axis Zipstream on Apr 13, 2015
Has Axis found its breakthrough differentiator? Can they demand a premium for...
Axis Zipstream Claims Average 50% Savings on Mar 25, 2015
Axis claims that its new Zipstream compression technology can "lower...
Comments (20) : Subscribers only. Login. or Join.