[UPDATE June 2013: We tested the Bosch Starlight camera against the new Sony Gen 6 camera. When doing so, we upgraded Bosch to its newest available firmware (5.80). We found this change (moving from 5.70 to 5.80), resulted in significant improvements in image quality and bandwidth consumption. The March 2013 test has been updated inside.]

In the past two years, Axis has boasted 'Lightfinder' technology in their top tier camera line, claiming quality color images even in extremely dark environments. And those cameras have performed well in IPVM shootouts - see our tests of the Q1602 and Q1604. Plus, Axis has integrated Lightfinder to many new cameras, helping to differentiate and justify its premium prices.

We did series of tests indoors at very low light levels including 0.1 lux, 0.5 lux and outdoors from 5 lux to less than 1 lux.

The NBN-733V is a competitive choice for low light applications, at an attractive price point. In some scenes, it outperforms Axis. However, users should be aware of its moderate motion blur issues, which Axis did not exhibit in our tests, and may be a problem for high-motion areas.

While the Bosch 1080p camera is a top tier performer in previous low light shootouts, the new 720p is so much better that it makes the 1080p look bad. If you are making a Bosch vs Bosch decision, the tradeoffs between the higher pixel count of the 1080p and higher price should be weighed against the 720p's much stronger low light performance.

This helps Bosch more than it hurts Axis. Just a few years ago, Bosch was OEMing Arecont and was a non factor in IP cameras. Now, they have multiple top tier offerings (Starlight plus the 1080p WDR camera). That should help Bosch cameras be more seriously considered. On the other hand, it does not leap Axis, who has been deploying this technology for a year and a half already. The two big questions become: What does Axis do next in low light and when will other manufacturers deliver similar low light cameras?

The image below is from our test of the Axis Q1602, where it clearly outperformed other D/N cameras with above average low light capability: 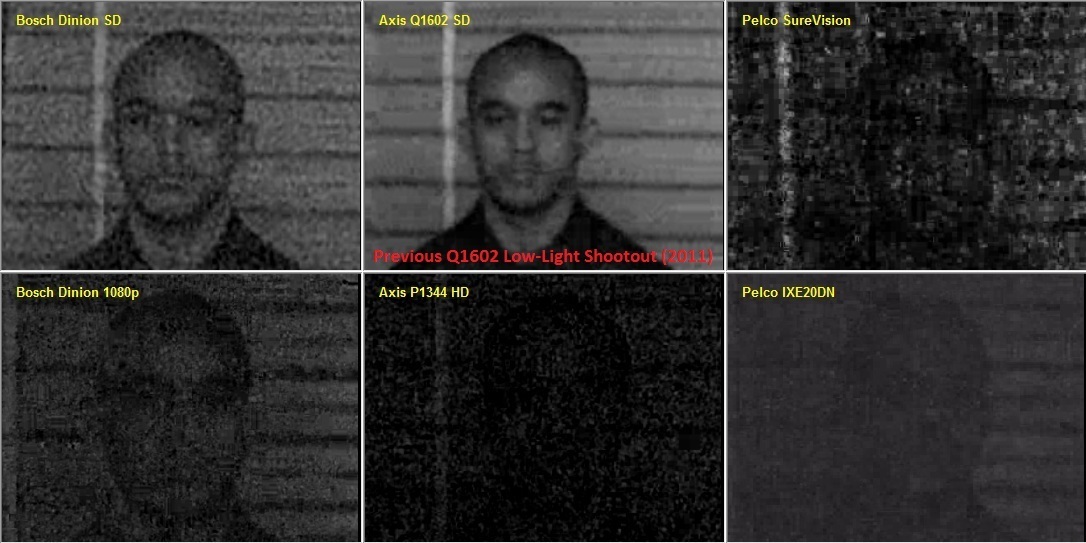 As discussed in our Bosch 1080p HDR model test, using default settings, the NBN-733V is desaturated compared to some competitors such as Axis. We tested Vibrant mode with the 733 to adjust color, but found that it also resulted in gains in low light image quality in both color and monochrome modes. The difference between the two modes may be seen in these comparison images, starting at .5 lux, in color mode:

At .1 lux in color mode, the difference is more pronounced:

Because of this increase in low light performance and saturation, we recommend users try vibrant mode in their scenes. We have found few, if any, tradeoffs when using this mode. Bandwidth consumption remains approximately the same as in default mode. The only caveat is that images may be moderately noisier, due to the increase in gain, but we found that the increase in brightness outweighed the increase in noise.

In the first of our low light scenes (~.5 lux) in color mode, the NBN-733V provides clearer detail of our subject, though it is noticeably noisier than the Axis cameras. 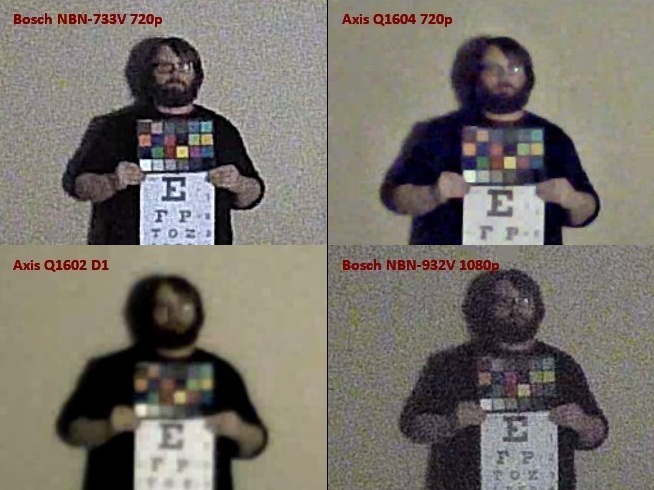 Lowering the light to ~.1 lux, the 733 still provides more detail than the other cameras, with more color information available, and the subject's face still somewhat distinguishable.

In monochrome mode at ~.1 lux, the 733's advantage diminishes, but the subject's face and letters on the chart are still more visible: 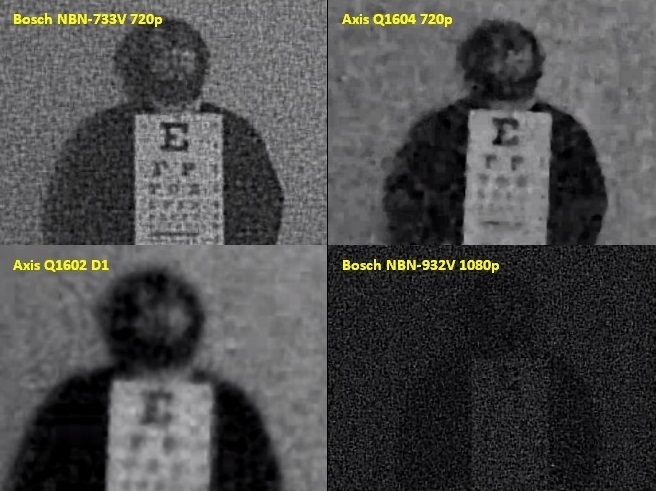 Finally, in full light, we can see the 733 (and 932) is desaturated compared to the Q1604. The blurriness of the Q1602 in this case is simply due to its lower resolution. 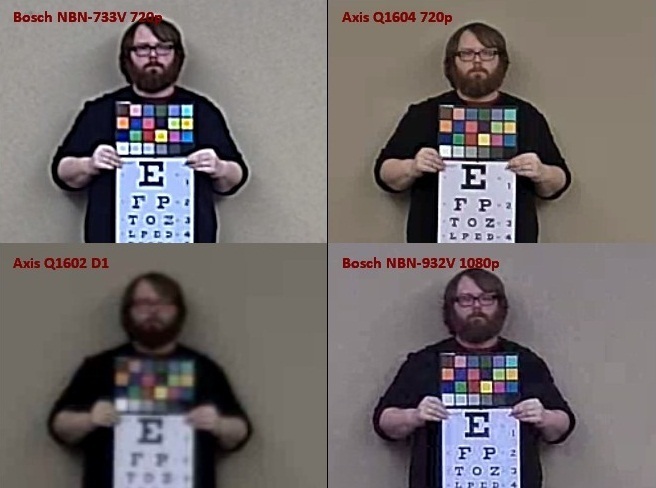 Results in an outdoor low light scene were fairly consistent with our indoor tests, with a few differences. In this example, outdoor lighting was left on, resulting in ~4-5 lux on target. In this scene, the horizontal field of view at the target is approximately as wide as our indoor scene, about 22'. 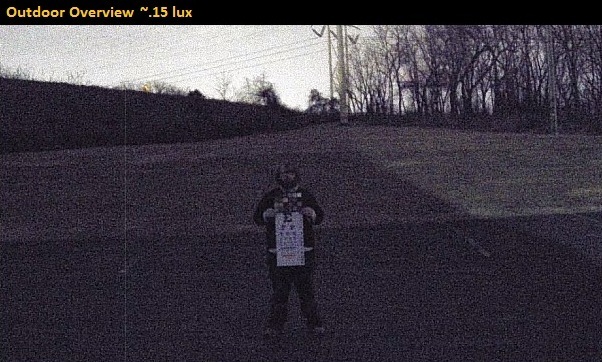 In this case, the NBN-733V provided the truest color of the cameras tested in a reversal from our indoor tests. Both the 733 and the Q1604 deliver similar detail, though the 733 edges out Axis in handling the light reflected by the chart, which washes out the letters in the Q1604's image, and is especially severe in the Q1602. 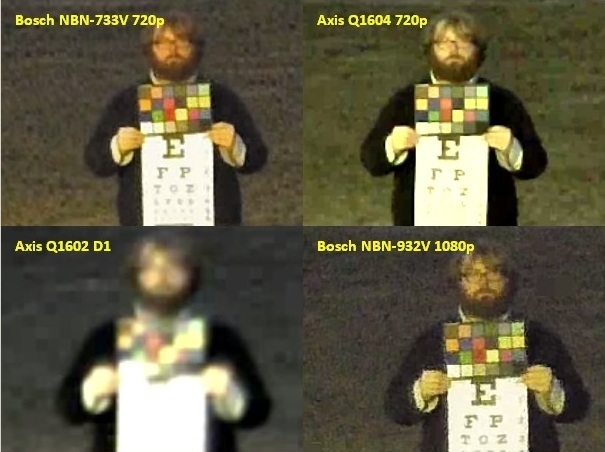 Turning off the outside lights, light levels drop to about 1 lux. The NBN-733V and Q1604 again perform fairly similarly, with the Q1604 providing more color, but letter slightly more readable in the 733. The Q1602's performance improves without the strong reflective light, though its lower resolution is a factor in details delivered. 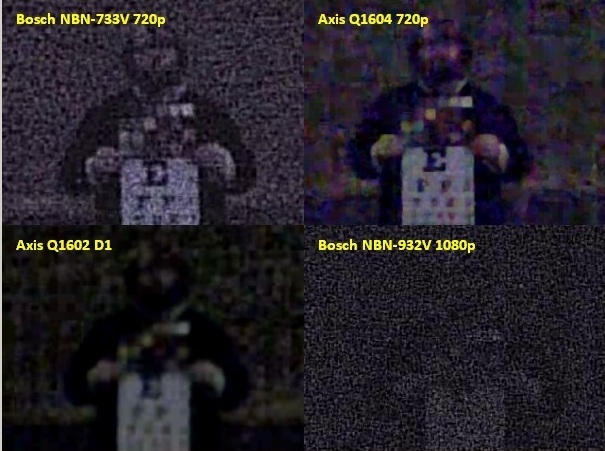 In monochrome mode at 1 lux, performance is again fairly similar. 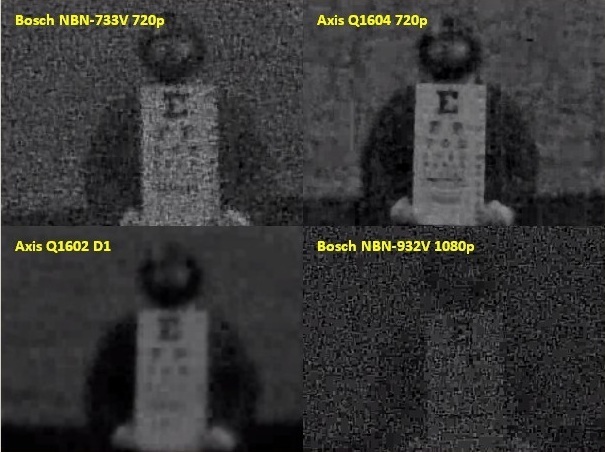 In low light scenes, the NBN-733V exhibited noticeable blurring on moving objects, which worsened as light levels decreased. This was not caused by slow shutter, as the 733's default shutter is 1/60s. Instead, Bosch informs us that this is due to its temporal noise filtering, part of their intelligent digital noise reduction algorithm. This adjusts noise reduction dynamically based on motion in the scene. Users may see this blur in this still image at ~.1 lux: 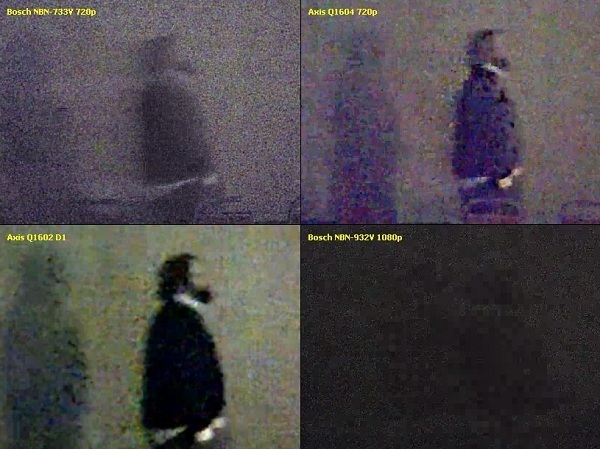 Download clips of all four cameras at .5 lux and .1 lux to see this effect.

After our original tests, Bosch publicly released version 5.80 of their firmware.  There are two key changes which users should be aware of:

We set up two NBN-733V cameras with identical lenses and settings (Vibrant Mode defaults, standardized to 30 FPS and 1/30s shutter speed) in order to see differences between these two versions. Starting at ~0.5 lx, we can see differences in 5.80. The image is brighter, with a very slight improvement to details seen in the subject. However, the chart becomes slightly less legible. In the 5.70 camera, some of row 5 can be read (PECFD), while in 5.80, row 4 (LPED) is the last row readable.

In full light, both cameras look nearly identical, with no gains in tone or saturation for either firmware:

5.80 has definite advantages over 5.70 in low motion scenes. In our full light scene, consumption was as follows:

In our low light scene, the advantage was even greater:

However, using a stage laser to simulate extreme amounts of motion, the difference is small, only about 100 Kb/s:

Based on all of the above factors, we believe users will likely find upgrading the version 5.80 advantageous in most cases. Those using the camera for scenes in which fine details must be read, such as license plates or other markings should test the firmware in place first, as we found some detail in written characters lost in low light scenes with 5.80.

Users wishing to see firmware 5.80 shot out against competitive cameras from Sony and Axis may see our Sony Gen 6 test for comparisons.

Factoring in Bosch's improvements with 5.80, Bosch bandwidth consumption was significantly lower than Axis across the board - in low light, even daytime and high motion scenes. The most dramatic difference was in low light where Bosch's advantage was 10x+.

Pros and Cons - Automating Firmware Updates on Jul 01, 2015
Firmware and software updates are one of the most tedious tasks in...
WDR Camera Shootout 2015 on May 04, 2015
This is the most comprehensive Wide Dynamic Range (WDR) IP camera shootout...
Axis Advances Its Best Overall Camera on Jun 17, 2014
While Chinese competitors rush to sell HD cameras at 1/5th to 1/10th the...
5MP Super Low Light Tested (Bosch) on May 27, 2014
Low light performance remains the biggest showstopper for multi-megapixel...
Trend: Day/Night Profiles for IP Cameras on Jan 09, 2014
A rising trend in IP cameras is adding different profiles for day and night...
Camera Pre-Installation / Bench Testing on May 04, 2012
There is a fine line between profit and loss on many surveillance projects....
Comments (19) : Subscribers only. Login. or Join.