Automatically identify what objects are persons vs cars vs bikes vs trucks. That is the new feature and claim from Bosch in their newest IVA analytics (6.10 version).

We first tested Bosch IVA here. With this new feature, we wanted to see how accurately this worked.

This video shows the basic setup process we used before testing:

We tested these analytics on multiple cameras in a busy outdoor scene, to answer these questions:

Bosch's IVA object classification was most accurate with cars and people. In low activity scenes, detection and correct classification of these objects across a ~190' field of view was reliable, missing few objects.

Detection of trucks was less reliable, with multiple cars grouped together classified as a truck, and some smaller trucks classified as cars.

Bicycles were classified least reliably, with people pushing baby strollers or  and some cars detected as bikes. Actual bicycles were infrequently missed or classified as another type of object.

IVA requires calibration for object classification, requiring users to measure multiple horizontal/vertical lines, as well as one or more angles for proper operation. Calibration was fast, if these measurements are known, and roughly accurate in its size/distance estimations.

With these newly added object classification abilities, Bosch's IVA analytics take a step closer in features to higher end analytic providers such Avigilon/VideoIQ and AgentVI, which have offered these capabilities for some time.

However, users should be careful in calibration, and limit where these analytics are deployed, with high activity scenes frequently causing objects to merge and be misclassified. Additionally, we recommend limiting expectations to people vs. vehicles (both cars and trucks), as proper detection of bicycles performed worst.

These improvements to IVA are available starting in firmware 6.10, available for most current IP cameras in the Bosch line. Firmware is available for download from the Bosch Security website.

The cameras passed distinct events to Genetec Security Center for each IVA rule created in the camera. This is shown in the event list, here, with cars, trucks, and generic "Detect any object" rules shown separately.

Milestone XProtect receives up to 16 distinct video analytics events from Bosch IVA cameras, though rule names are not loaded from the camera and must be configured separately. 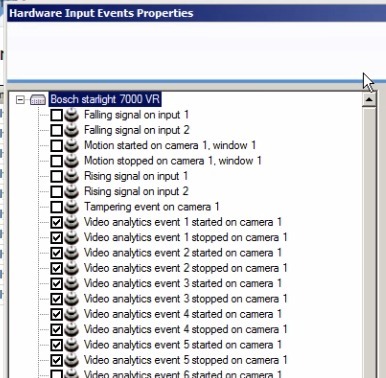 Avigilon Control Center and Exacq did not display these analytic events, only basic motion detection.

Calibration requires users to mark known distances, heights, and/or angles in the camera's field of view. We performed calibration using Google Maps measurements and angle estimates and found it to be fairly accurate, within a few feet of actual measurements.

This process is reviewed in the video below:

With little activity in the scene, cars, people, and trucks are classified correctly >90% of the time. For example, object flags for cars and people can be seen correctly attached to the respective objects in this image: 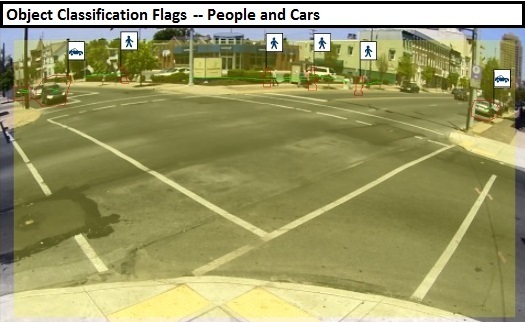 Detection was accurate for people, even with numerous objects in the scene. 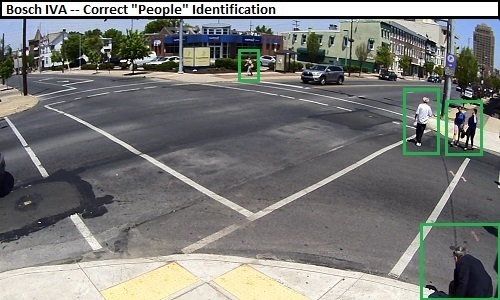 Cars and trucks were correctly identified in the majority of cases, though there was some overlap with trucks, depending on size (below): 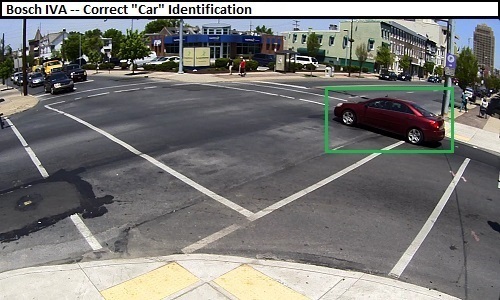 Finally, when a bike (bicicyle or motorbike) was present, it was correctly classified in all cases, such as the one seen here: 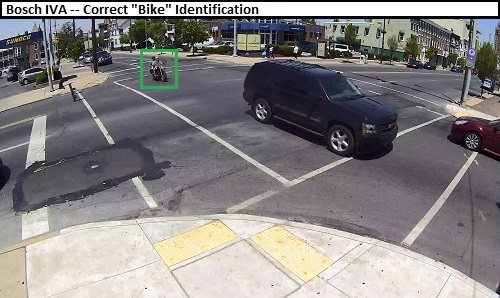 However, misclassifications were common for bikes, and to a lesser extent, trucks.

Most commonly, misclassifications were caused by multiple objects grouped together when there was more activity in the scene, appearing as a single larger object to the camera. This was most often due to a group of cars appearing as a truck, seen here: 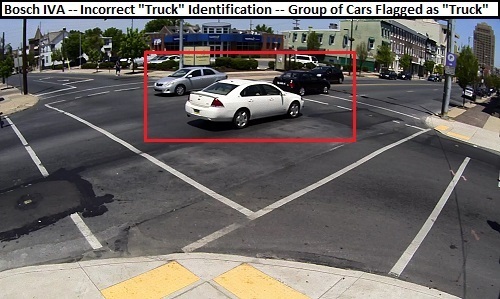 Of the misclassified objects, the distinction between cars and trucks is likely most minor. Typically, users want to know whether a vehicle is present, regardless of the size. However, in some more specialized applications (e.g., tunnels or bridges where trucks are prohibited, cars-only driveways, etc.), appearing as two distinct objects is necessary.

Other Objects Classifed As Bikes

Bikes were the most common misreported object type, with practically every other object type appearing as a bike to the camera at one point or another.

For example, a human subject with a stroller: 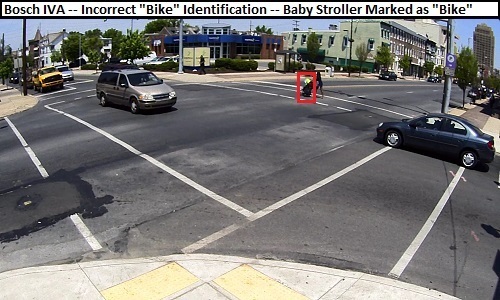 Or pushing a walker: 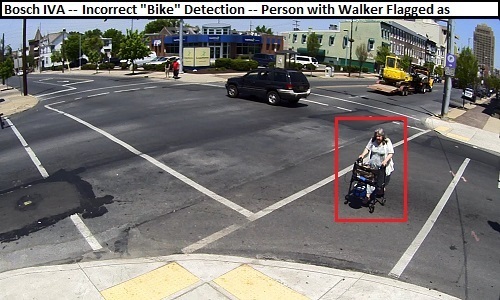 Note in both of these cases, the person is upright, in a similar posture to someone riding a bike, likely the reason for the misclassification.

However, in the worst case, bizarrely, a bus was classified as a bicycle as well: 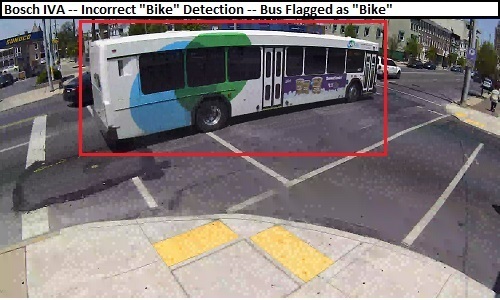 Two cameras were used for this test:

Bosch G-Series Intrusion Tested on Jul 26, 2017
Bosch is one of the biggest names in intrusion, and the company's G-Series...
Avigilon Appearance Search Aims to Transform Video Surveillance on Jun 20, 2016
After a 'revolutionary' edge storage release this Spring, Avigilon is now...
Hikvision vs Exacq VMS on Jun 15, 2016
Hikvision and Exacq are two of the most commonly used recorders in the...
Comments (14) : Subscribers only. Login. or Join.