PTZs have historically struggled in low light, with integrated IR being uncommon. In the past few years, this has changed, as some integrated IR models have emerged. However, in previous tests, we have seen significant focus issues making tracking subject difficult (if not nearly impossible).

Now, Bosch has introduced an integrated IR model, the Autodome IP 5000 IR, included advanced configuration features not seen in other models to combat these issues.

Can this new model from Bosch remedy the issues which plagued past IR PTZs? We bought the 1080p model (the NEZ-5230-IRCW4) and tested it in two low light scenes, including a dark open field and lit parking lot:

Inside, we review how the Autodome 5000 IR stacks up.

The Bosch Autodome 5000 IR greatly reduces the focus tracking issues found in past IR PTZs, one of their main drawbacks, while offering range equal to or greater than these models.

However, it has contrast issues not found in other models, reducing image quality at long zoom ranges, and may overexpose subjects at mid range, when "far" LEDs activate.

Despite these issues, however, the Autodome 5000 IR offers low light performance well beyond that of typical non-IR PTZs, which essentially produce black images in low light scenes at range.

The Autodome 5000 is similar to other IR PTZs we have tested, with IR LEDs located below the lens, and the entire assembly acting essentially as a heat sink.

The Autodome 5000 includes some configuration options not found in other IR PTZs, including:

Other than these additions, most of the Autodome 5000's web interface is the same as other Bosch cameras. We review config in this screencast:

As seen in past tests, IR PTZs often have issues properly tracking focus, with some cameras taking up to 10-15 seconds to properly focus. The Autodome 5000 IR improves upon these issues, though still took 3-4 seconds to properly focus at times. Generally speaking, the camera tracked focus better overall, not needing to run a full focus scan where others did.

We take a look at these issues in this video:

The Autodome 5000 IR uses four total LEDs, two for wide angle/near shots, and two for longer range. Both sets adjust power up/down depending on zoom level, as seen here, zooming from wide to telephoto and back:

Though the camera adjusts IR power and which LEDs are used, we found overexposure issues in some cases. Most notably, in the parking lot test scene, the camera overexposes our subject as he nears the camera, when the "far" set of LEDs switches on, seen below. Users could compensate for this by adjusting IR power in the web interface, but this will also reduce illumination range.

When zoomed in, the Autodome 5000 IR takes on a "hazy" appearance, with contrast reduced and subject details more difficult to discern. This is most notable in our open field testing: 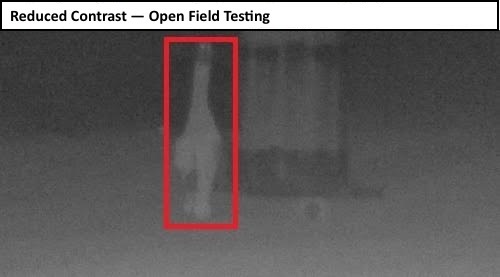 Though it is noticeable in our parking lot scene as well: 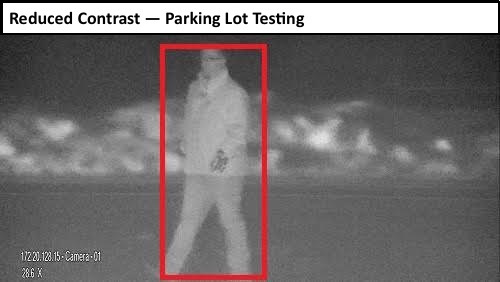 The Autodome 5000 IR was able to illuminate subjects at over 500' range, though without facial details, even at max zoom. This comparison shows image quality of our subject at target ranges varying from about 50' to 500'. At near range, the subject is slightly overexposed, reducing details, while at 500', IR power is weaker and the contrast reduction discussed above obscures details of the subject. 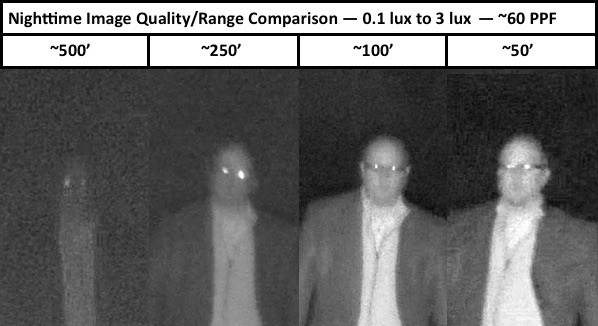 Note that while the subject may appear somewhat hazy at long distances in these images, the Autodome 5000 IR still easily outperforms non-IR PTZs, seen in the image below. The non-IR model produces no usable image at any distance.

The image below shows comparative image quality during the day. At long range, common to other long lenses and PTZs, there is noticeable blur, even when optimally focused. See our Major Flaw in Long Lenses and PTZs Found report for more details.

The camera was tested using default settings, with only three changes: