In this report, we test Bosch's Dinion IP cameras against leading cameras from Axis, Pelco and Sony. Our goal in this test was to understand (1) how Bosch's cameras compared to one another and (2) more importantly how they matched up against competitor's cameras.

The most attractive of the 3 Bosch cameras is clearly the 1080p. The 1080p is one of the best overall performing cameras we have tested. For high end applications, it is worth considering compared to any of the big names - Axis P series, Sony V series, Panasonic, etc. At ~$800 USD online price, without lens, it is of comparable to slightly higher price to other cameras in its category.

The 720p Bosch camera's performance falls in between the entry level Axis M series and professional P series. The most notable drawback of the 720p Bosch compared to the Axis P1344 is Bosch's inferior low light performance. The 720p Bosch has an online price of ~$600 without lens which makes it fairly competitively priced for what it delivers.

The SD Bosch only advantage is superior low light performance. However, at ~$800 online pricing (without lens), the Bosch 1080p is likely a better value and better performer in most cases. [UPDATE: Bosch informs us that they recently dropped pricing on the SD 498 model that should result in online pricing falling to the $650 - $700 range. This increases the gap in price with the 1080p and might make some budget conscious users pick the SD. However, $100-$150 more for the 1080p HD version is not a significant premium].

For those whose main priority is low light performance and are willing to tolerate the limitations of a non megapixel camera, the Axis Q1602 will deliver better low light images for ~$200 more (assuming Bosch's new SD pricing)

We have 2 specific technical recommendations for using the camera:

The test below is from our indoor scene at ~0.2 lux showing an overview of the scene. 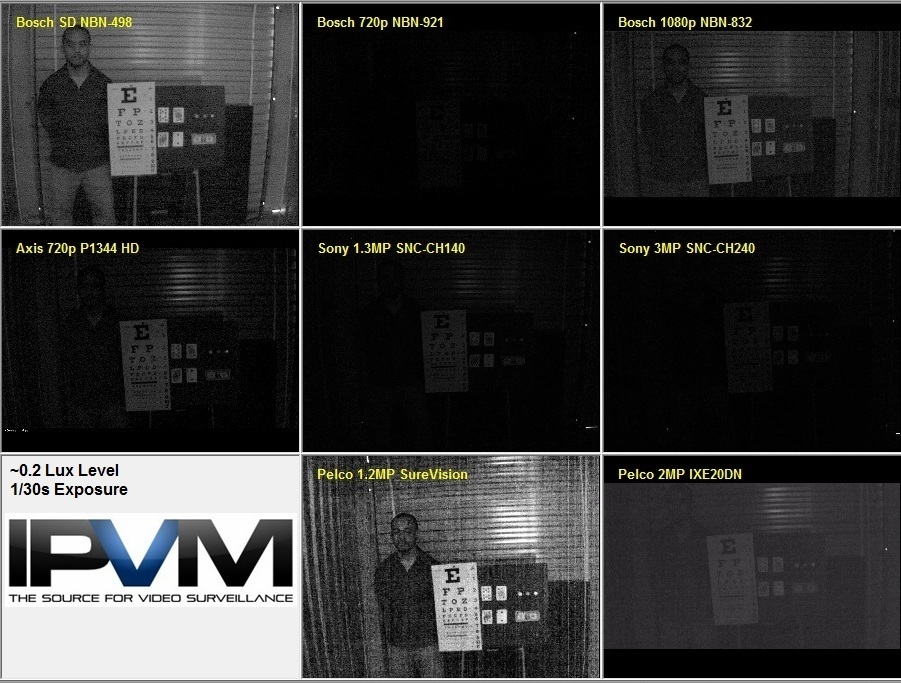 The two biggest stand-outs are:

Next, we digitally zoom into all of the cameras to examine facial details: 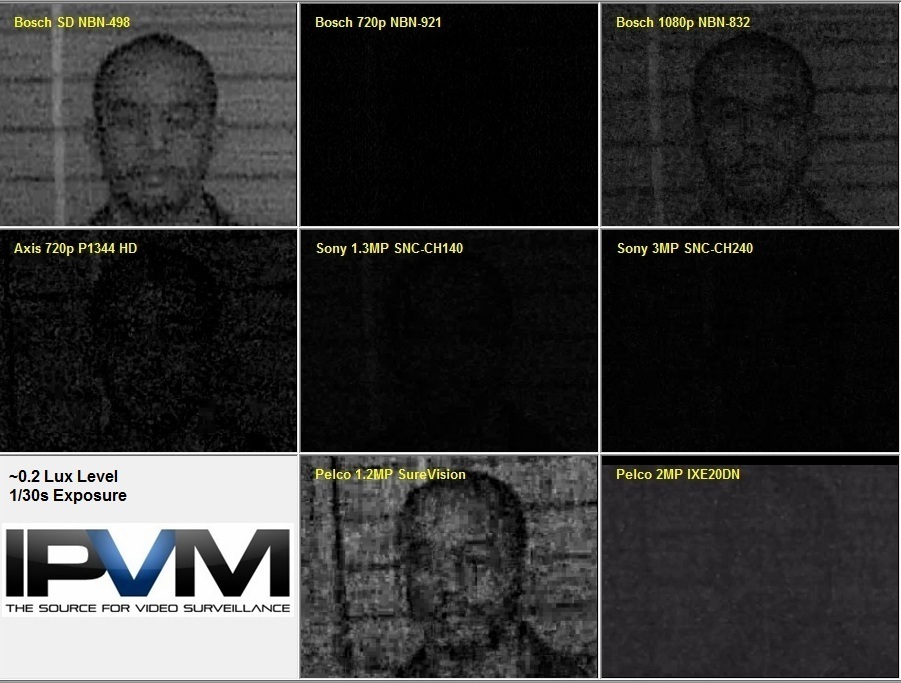 The Bosch SD and 1080p are clearly the best two performers with the Bosch 1080p fairly close in terms of level of detail displayed.

The Axis Q1602 is clearly better than both Bosch's.

Finally, we switch to color mode for the same cameras:

The Axis Q1602's lead is even stronger here with the Bosch SD image quality degrading (compared to B&W) and the Bosch 1080p displaying no colors at all.

Now, we examine a subject 80 feet away from the camera at an ~80 feet wide FoV. This a fairly wide area to cover. Compare the differences in performance: 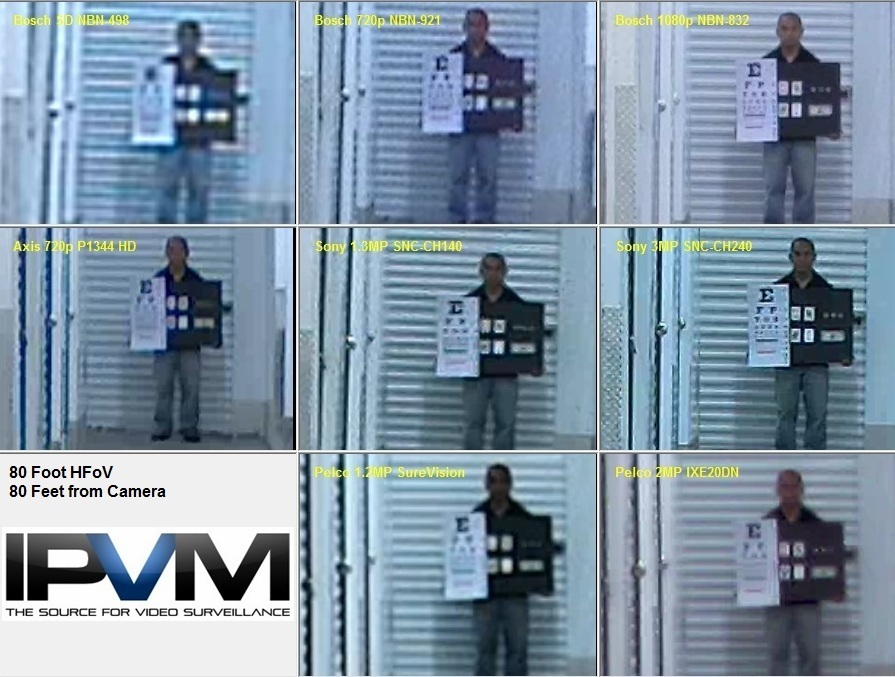 Not surprisingly, the Bosch SD, the only SD in this round, does the worst by a considerable margin. The Bosch 1080p and the Sony 3MP do the best, significantly better than the other cameras including the Bosch 720p.

Now we turn to a comparison of WDR performance. In this first comparison, we are testing a subject close to the camera in a FoV of about 12 feet wide: 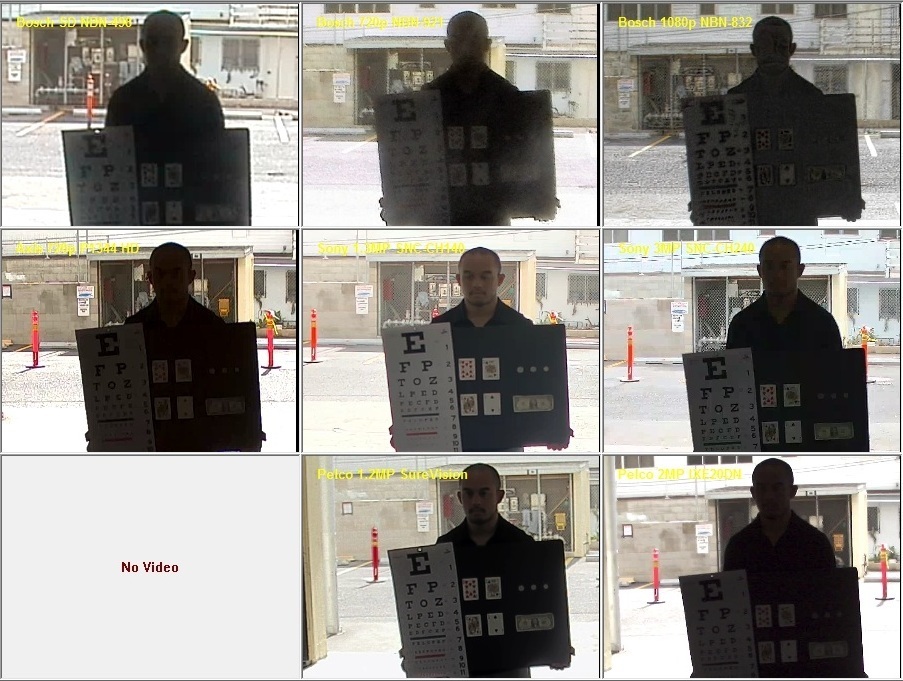 The two standout performers are the Sony and Pelco cameras with all Bosch cameras clearly behind. That said, among the Bosch's the 1080p captures the most amount of overall details.

Last, we turn to the same scene but with the subject farther from the camera at ~25 feet Horizontal FoV. 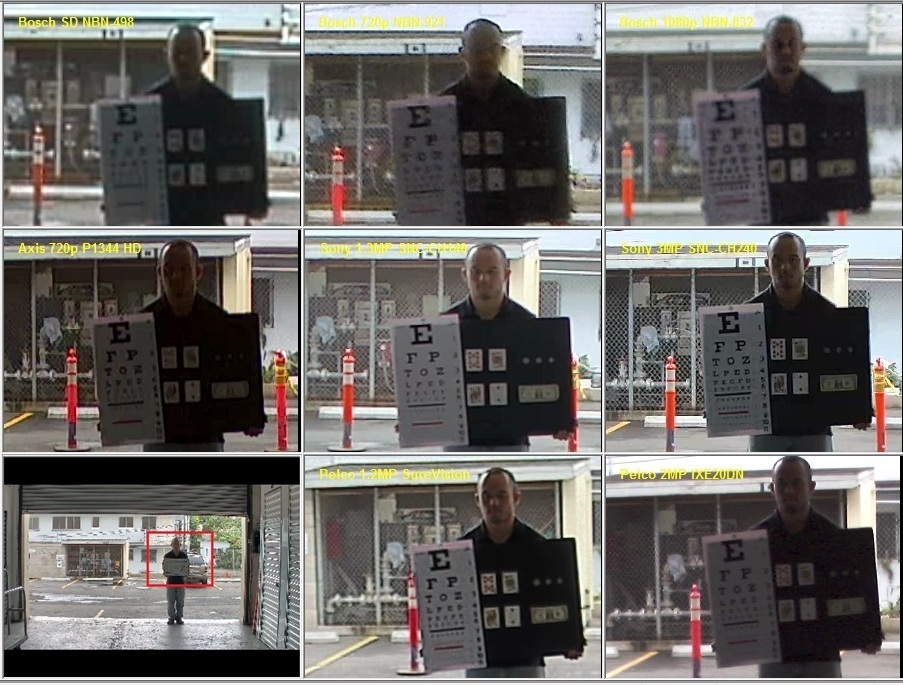 In this appendix video, we overview the Bosch configuration options including low light optimizations and video encoding settings: