Low light performance remains the biggest showstopper for multi-megapixel cameras. Test after test, 5 MP and even 1080p cameras are consistently outperformed by 720p models. Bosch is aiming to change this, however, with their new NBN-80052, a 5 MP model using a larger 1/1.8" imager and the starlight technology built into their NBN-733V, consistently one of the top performers in our tests.

To find out how much this model narrows the performance gap, we put it up against a 5 MP competitor from Arecont Vision, and 1080p and 720p models from Axis, Bosch, and Samsung in four different scenes, ranging from a narrow 20' field of view indoors: 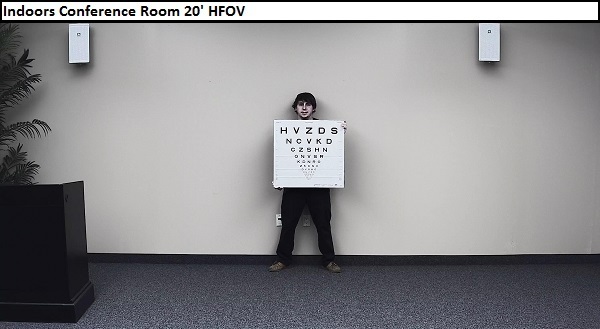 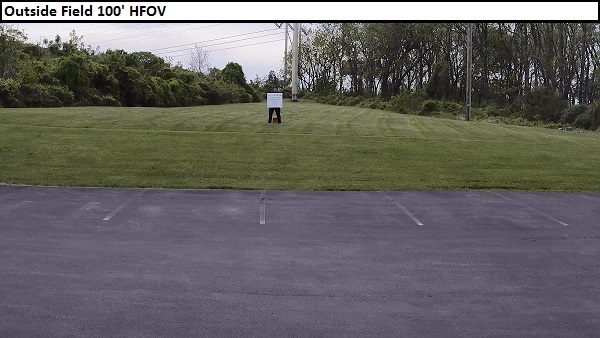 As well as a WDR warehouse scene:

The NBN-80052 is a significant improvement in low light performance over past 5 MP models, especially beneficial in wider fields of view with some light available (2 lux and above). However, it is priced at a premium, at nearly twice the price of other 5 MP cameras, and $300-400 more than current low light 720p/1080p models.

In this video we review the physical construction of the Starlight 8000 camera. Form factor is the same as other Bosch box cameras, though it is noticeably heavier. The lens, a 5 MP 4.1-9mm IR corrected varifocal model, is also much larger than typical CS mount lenses, in order to accommodate the camera's 1/1.8" imager.

Here we briefly review configuration of the NBN-80052. Those familiar with other Bosch cameras will find nothing different here, aside from the option to change "mode" from 5 MP 16:9 to 5 MP 4:3 or 1080p.

We began by testing indoors in a narrow field of view, ~20', seen below. 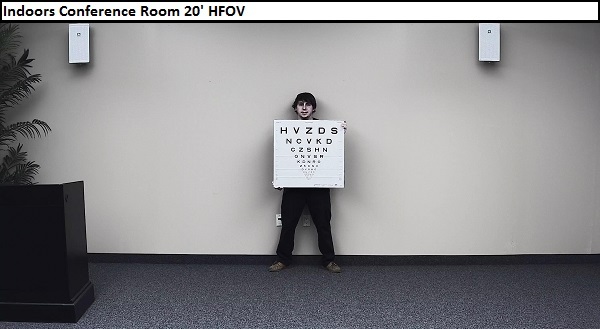 In full light, the NBN-80052 is notably desaturated, almost appearing monochrome compared to other cameras. More lines of the test chart are visible (down to line 9) than in any other camera due to its higher PPF. 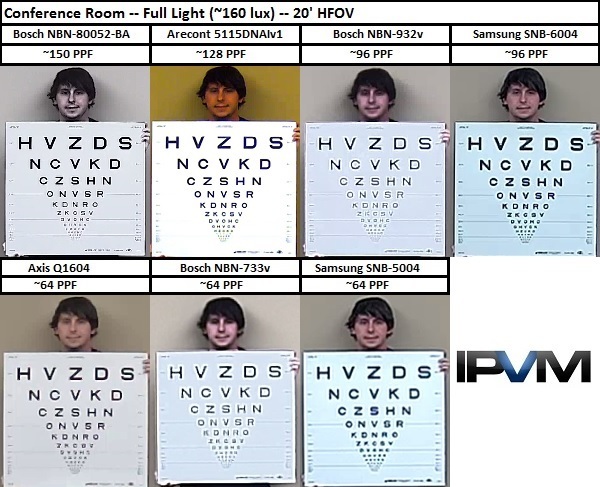 In low light, ~2 lux, the NBN-80052 produces a high quality image as well, with better visibility than both 1080p models tested, the Bosch NBN-932V and Samsung SNB-6004. The other 5 MP camera in this test, the Arecont 5115DNAIv1 produced no usable image here. 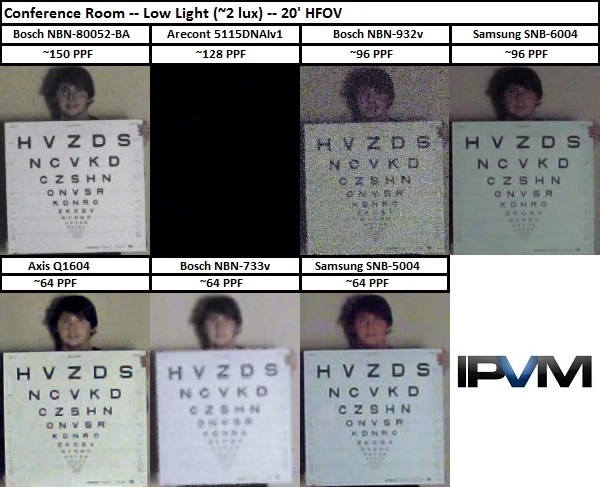 Finally, with all lights off, below 1 lux, the Bosch NBN-80052 still clearly displays the chart though details of the subject are lost. Its image is brighter than the NBN-932V and less noisy than the 1080p Samsung SNB-6004. The combination of low light performance and higher resolution results in more visibility in the chart here than even the 720p Axis Q1604 and Bosch NBN-733V, though the Samsung SNB-5004 is slightly more legible. 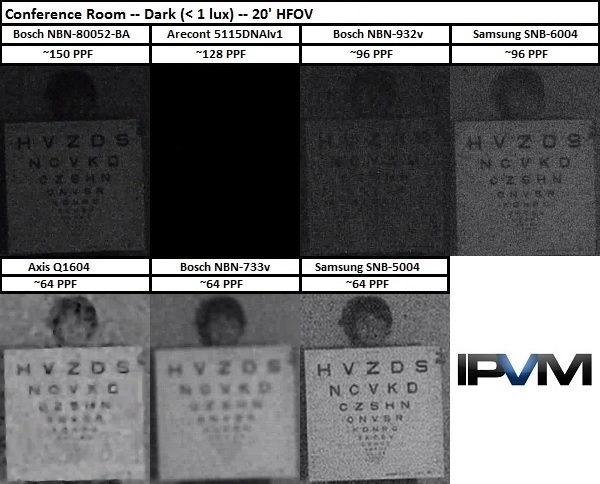 Next we tested in wider fields of view to see if the beneifts of 5 MP resolution held up in daylight and nighttime, starting at 50' wide. 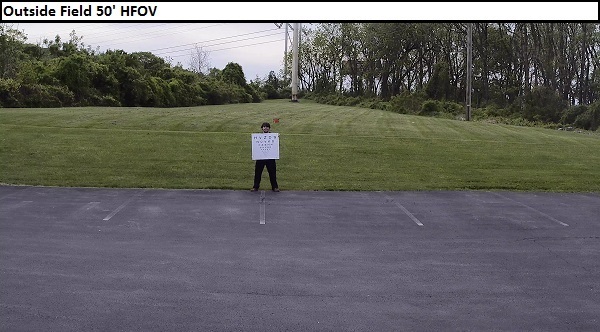 In this scene, the NBN-80052 clearly produces more details than any other camera in the test. At a HFOV this wide, the 720p models simply do not provide enough pixels per foot to provide good details of the subject or chart. 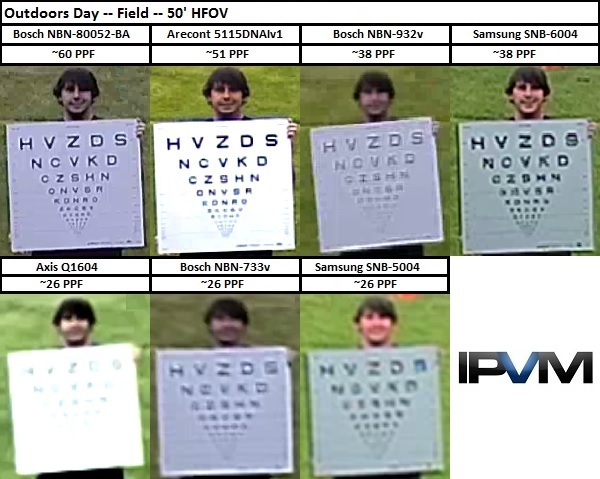 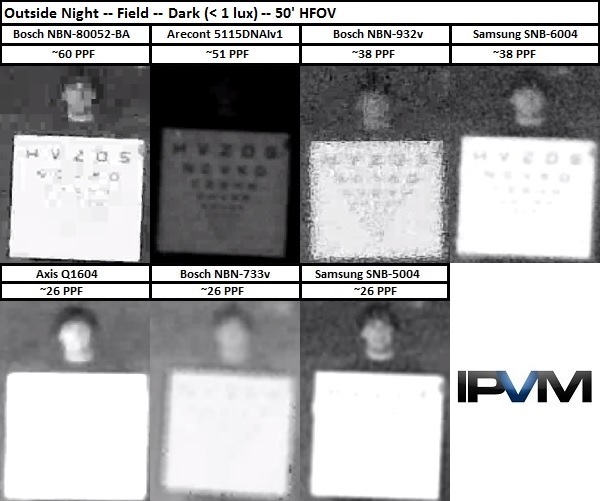 We moved our subject back, resulting in a 100' wide FOV at the target, seen in this image: 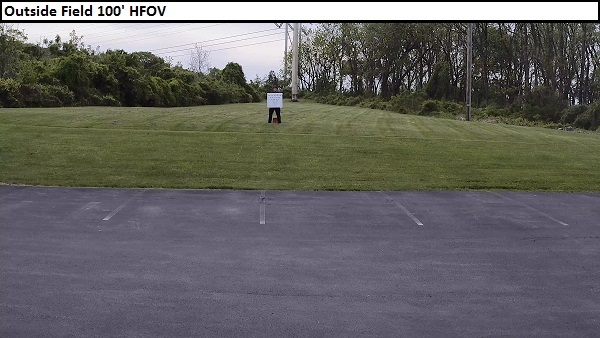 Again, during the day, the Bosch NBN-80052 produces more details of both the subject and chart than other cameras in the test. 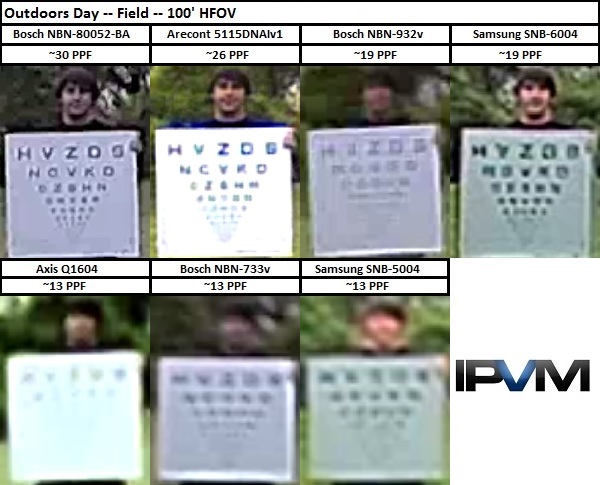 However, in low light (~3 lux on target), noise and lower PPF result in no visible details of either subject or chart, though the subject is still more visible than in the 1080p NBN-932V, while the Arecont 5115 is barely able to detect even the bright test chart. 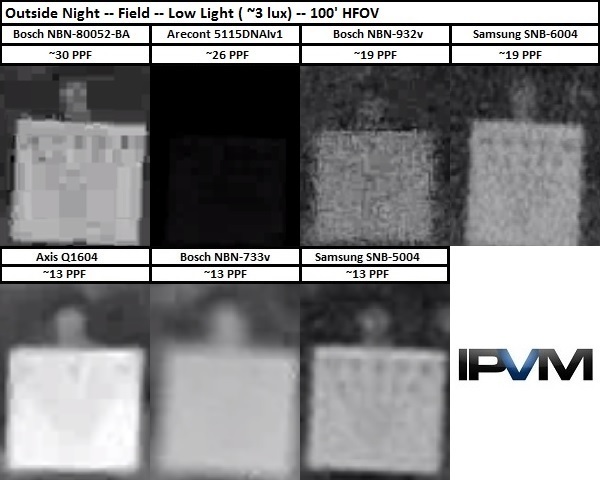 We tested WDR performance in a warehouse scene against an open overhead door, seen below: 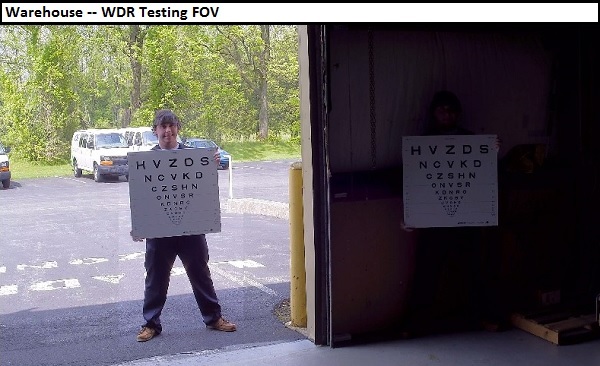 With the subject against the bright outdoor area, the NBN-80052 performs well, on par with top WDR cameras such as the NBN-932V and Samsung SNB-6004, and better than the 5MP Arecont 5115. The subject and chart are clearly visible, as is the parking lot outside behind the subject. In the darker area next to the door, performance is similar to 1080p models, but lags somewhat behind 720p models such as the Axis Q1604 and Samsung SNB-5004. 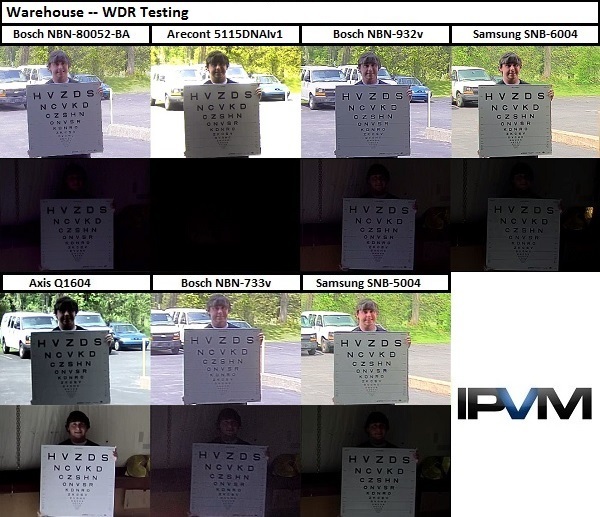 Turning on backlight compensation (standard or Intelligent AE) results in a slight increase in visibility when the subject is in the darker area near the door, but performance against bright backgrounds is practically unchanged. 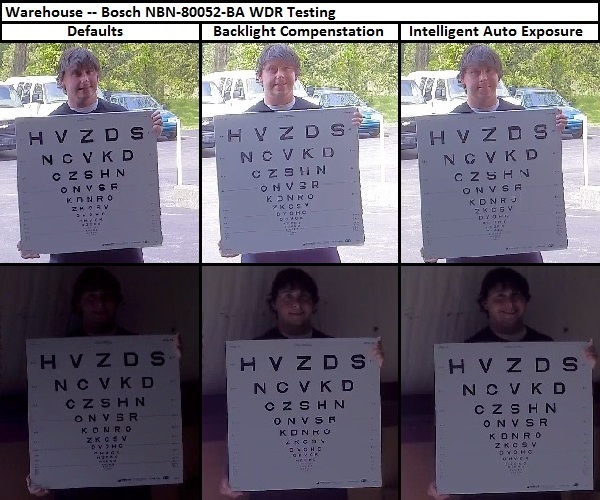 All cameras were testing using default settings, with exposure standardized to 1/30s. H.264 compression was used, with a framerate of 10 and quantization of ~28 average.

These are the firmware versions used for each camera:

Bosch / Milestone Forensic Search Tested on Jan 08, 2020
Bosch's Forensic Search Milestone plugin integrates Bosch IVA and EVA...
Bosch IVA Video Analytics And Motion+ VMD Tested on Jun 06, 2018
Bosch's video analytics now ship on nearly every model, from indoor domes to...
Next Gen 5MP / 6MP Camera Shootout - Axis vs Dahua vs Hanwha vs Hikvision on Feb 28, 2018
Many manufacturers have released new generation 5MP / 6MP cameras that tout...
Favorite Large System Cameras on Aug 03, 2015
For large systems, with over 100 cameras, we identified the most preferred...
Milestone LPR Tested on Mar 31, 2015
How well does Milestone's LPR work? Milestone's LPR supports off the shelf...
Bosch 4K Tested on Jan 21, 2015
4K promises more pixels but does it undermine WDR and low light...
Axis 4K Tested (P1428E) on Oct 29, 2014
[UPDATE August 2015: We recently updated firmware on this camera for an...
Winners Losers Fall 2014 on Oct 13, 2014
We are all losers, IPVM included. The historically poor new releases for...
Fall 2014 New Products Directory on Sep 23, 2014
New releases are weak this year, and unfortunately, the trend does not appear...
Axis Advances Its Best Overall Camera on Jun 17, 2014
While Chinese competitors rush to sell HD cameras at 1/5th to 1/10th the...
Comments (9) : Subscribers only. Login. or Join.