Wireless cameras almost always still need a wire for power. Given that, many argue to just used wired cameras anyway.

Now, startup Blink has released a battery powered wireless camera that needs no wires. Plus, the camera / kit sells for just ~$100 plus $60 for additional cameras, a remarkably low price. 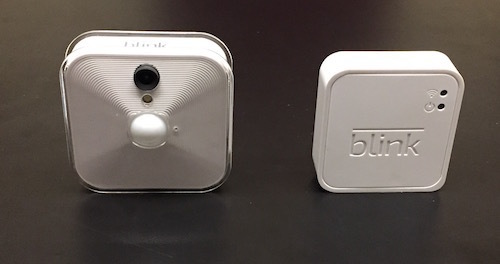 We bought a Blink and tested the following capabilities:

Additionally, Blink requires no monthly payment for cloud storage and no SD card, which also is a notable savings against premium competitors.

However, there are multiple drawbacks to this approach, as well:

We struggle to see the right competitive application for Blink:

However, the white LED will be a major problem for night time monitoring (babies, nannies, etc., truly anyone but a thief where it could be positive) and the limited recording will be an issue for some. If Blink can release a future version with an IR LED, we think it would radically expand its market potential.

A Blink starter kit containing the hub and one camera sells for $99 USD online. Additional cameras (up to 10 per hub) cost $60.

This is far less expensive than typical consumer models. With this pricing, users can purchase a three camera Blink system ($220) for only ~$20 more than a single home camera, such as Nest, Samsung, Canary, etc., usually ~$200.

However, this is significantly more than some wireless cameras which have recently become available, such as the $30 Walmart Momentum cam or $50 Yi Home, though those cameras require wired power.

Blink does not charge any recurring fees for cloud access. Two hours of storage is provided for each user, which amounts to (720) 10 second clips, (1440) 5 second clips, etc. Note that this is shared between all cameras on the user's account, not individual to each camera.

Over the course of a week's testing in a busy office, we received about 400 clips from one camera, which equates to more than half our allotted storage. Home users likely will receive fewer alerts, depending on activity level (how many people are in the household, individual schedules, long periods of travel, etc.).

The Blink camera and hub are both compact, about 2.5" square, roughly the size of a Nest Cam without the stand.

Aside from the lens, the camera's face contains its PIR (center), white LED, and recording indicator.

Camera(s) are displayed on the main page, with users clicking one to begin live view. Users may arm/disarm each camera individually, or the system as a whole. Not automatic arming/disarming based on the user's location is available, though Blink says they plan to include this in future releases.

Event clips, despite being the most frequent use of the app, are displayed in a second page with an unobtrusive icon, not prominently displayed. Clips are displayed in chronological order, with no way of searching for a specific date or time, requiring users to scroll down through their event list to find a specific incident.

Clips may be exported to the mobile device or sent via email/text message/iMessage, etc.

Configuration of the Blink camera, including clip length, motion sensitivity (discussed below), and more is shown in this video:

Unlike most cameras, Blink uses a white illuminator instead of IR. When on, it essentially looks like a small flashlight shining from the front of the camera.

While it covers small to mid-sized rooms fairly well, the light may be annoying to many users and even scare/surprise children, limiting camera placement or requiring the system to be disarmed when family members at home.

Additionally, the white LED prevents Blink from being used as a baby monitor, a common use case for consumer wireless models.

This animation shows the white LED activating at about a 10' distance from the camera.

We tested wireless range between sync module and camera both indoors and out, measuring about 110' in both tests, slightly further than Blink's claimed 100' range.

Indoors, this distance was achieved through multiple metal stud and drywall walls, as well as a 1' thick firewall. Outdoors testing was open air.

Due to its built in PIR, Blink offers very accurate motion detection, with no false alarms in our tests, and nearly no missed detections.

Using default settings (6 out of 9), detection range was about 25' when crossing the camera FOV, but shorter if approaching and/or moving slowly, as low as 10' feet in some tests. 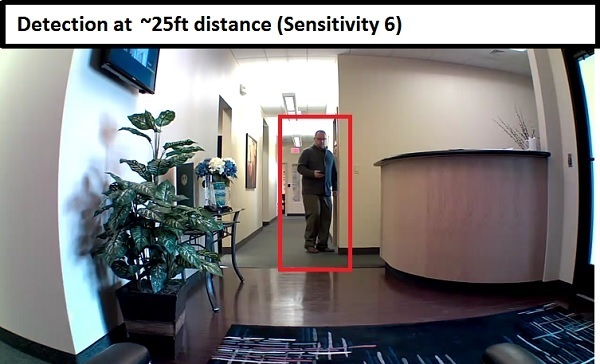 Increasing sensitivity to maximum (9), detection range doubled, with reliable triggering at 50' from the camera. In our tests, even at this high sensitivity setting, we still did not receive any false alerts. 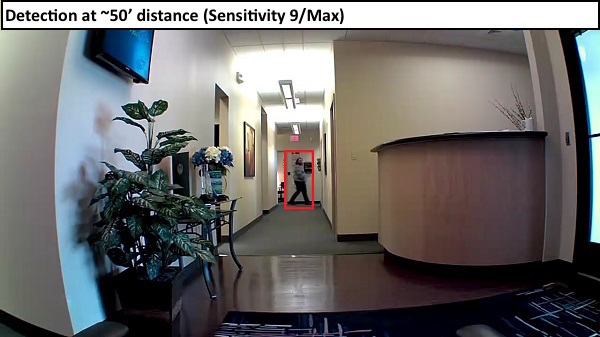 The camera is powered by two lithium batteries, with a claimed battery life of "over a year" under normal operation. We cannot determine how much battery life was consumed over the course of our testing as the app displays only a small graphic icon, no exact percentage. We received over 400 clips, day and night over the course of a week, in addition to viewing live video frequently, and the battery indicator remains at full.

Importantly, the on year specification is based on only using it for 5.5 hours for the year (FAQ says 20,000 seconds, which equates to 5.5 hours), which would be fairly sporadic. As such, even moderate usage will drain the battery in months, if not weeks.

There is a slight delay before the Blink camera transmits events to the sync module. This allows intruders who are aware of the camera to approach it, grab it, and remove the batteries/destroy it before the event is sent. Additionally, no event is sent notifying the user that the camera has been destroyed or the batteries removed. This essentially allows a quick and savvy intruder free reign with no notification of his presence.

By contrast, even low end DVRs, along with most consumer models, send some sort of notification that a device is offline, which is simply not included in Blink.

Given its advantages and disadvantages, would you use Blink in your home? Tell us why or why not in the comments.

Directory of 70+ VSaaS / Cloud Video Surveillance Providers on May 17, 2021
This directory provides a list of VSaaS / cloud video surveillance providers...
Amazon Acquires Blink on Dec 22, 2017
Amazon has made their first significant acquisition in the connected home...
ONVIF Wire Free Camera Tested (Netgear FlexPower) on Oct 31, 2017
Totally wire-free cameras are a hot growth market. But they have had one...
Directory Of Consumer Security Cameras on Aug 16, 2017
The consumer camera segment continues to grow, with new startups and models...
Hikvision Ezviz Mini Trooper Totally Wireless Camera Tested on Jun 13, 2017
Totally wireless cameras are a major growth trend in video surveillance,...
Blink XT Outdoor Totally Wireless Camera Tested on May 11, 2017
Running wires for cameras outdoors is one of the biggest challenges,...
Totally Wireless IP Camera (IPVideo Corp NomadHD) on Sep 21, 2016
Wireless battery powered cameras have been a surveillance pipe dream for...
Nest Announces Outdoor Camera With Numerous Flaws on Jul 14, 2016
NEST CEO was ousted / resigned after strong criticisms from Dropcam's...
Micropower Fails on May 02, 2016
Wireless video surveillance is a tough business. Micropower sought to deliver...
Netgear Arlo Totally Wireless Camera Tested on Feb 22, 2016
Wireless cameras almost always still need a wire for power. Given that, many...
Comments (21) : Subscribers only. Login. or Join.