Perhaps the biggest and most important conference in retail security just concluded last week. IPVM went down to New Orleans to see what was being showcased at the NRF Loss Prevention show [link no longer available]. In this report, we share a series of observations and findings from our visit.

Here's a glimpse from a keynote session: 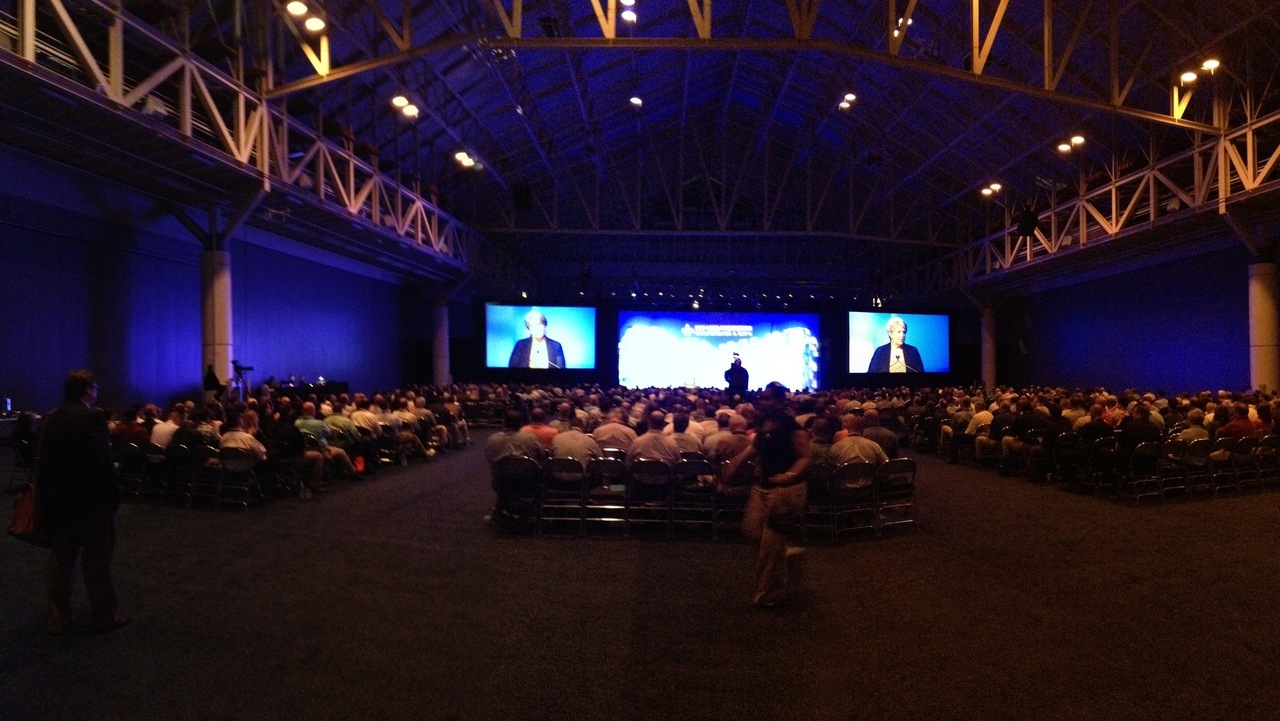 Unlike ISC West or ASIS, the NRF LP conference really centered around sessions. Over the next week, we will releasing review of the various sessions plus we will hold a special PRO member only webinar this Thursday (register inside).

To start, though, here are our key observations from the event:

Compared to recent shows, traffic was fairly flat. Characteristically, the expo hall was busy early the first day, but waned the second and significantly dropped off by midday. In general, the exhibitors we spoke with suggested that while traffic volumes were consistent compared to previous years, most attendees were there just to 'kick tires' and gather information but not really in a 'buying mood'. Here's an image early on the first day at the front of the hall: 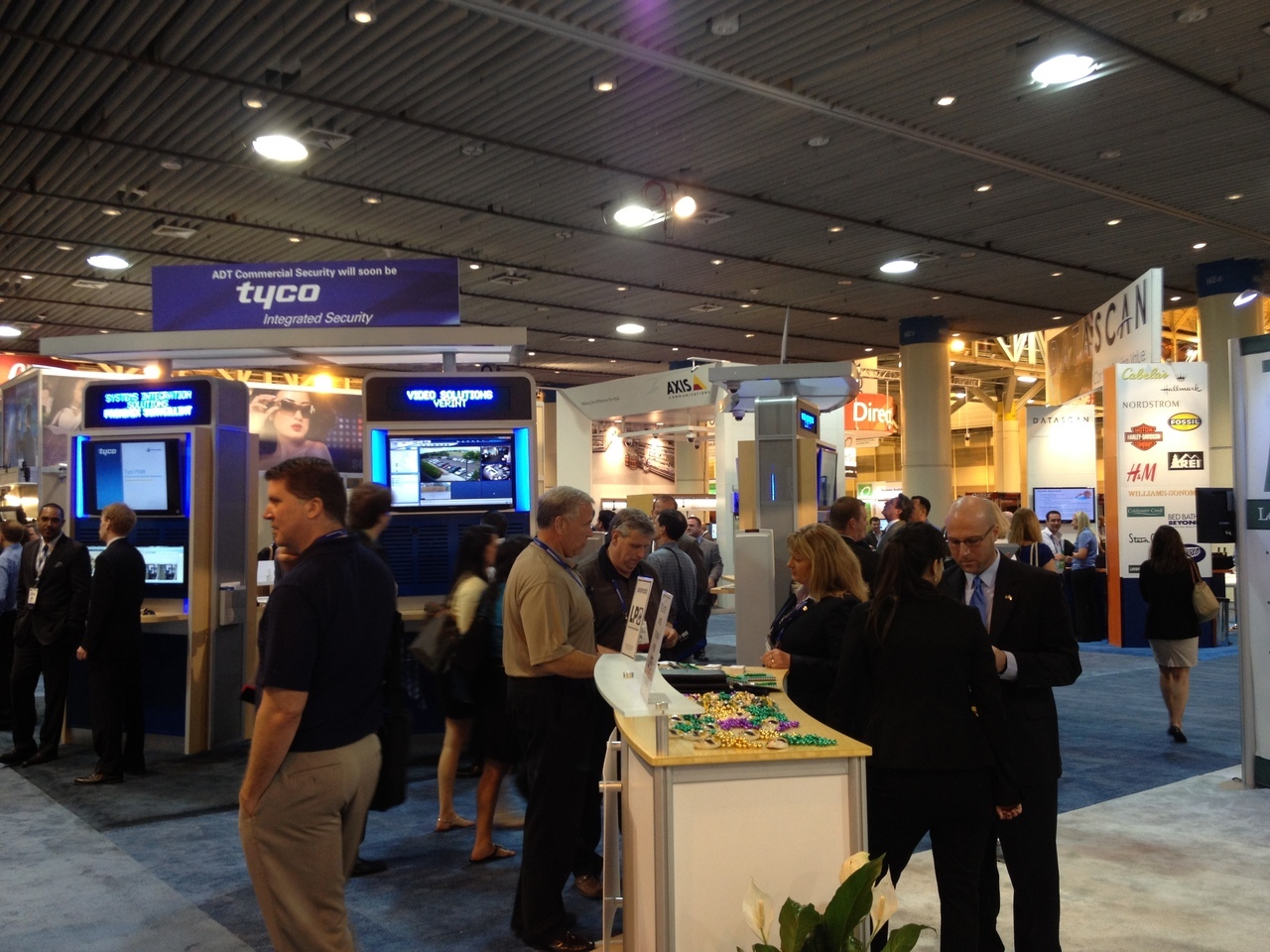 One of the biggest buzz words being discussed at NRF-LP was ‘mobile Point-of-Sale’. This concept encompasses a variety of ideas, primarily freeing POS utilities from hard terminals and implementing them on mobile devices. Many of the time-tested and vetted security measures preventing loss at these terminals do not apply to mobile devices being flexibly used on the sales floor. I captured pictures of every vendor's booth featuring a security product solving a mobile POS problem: 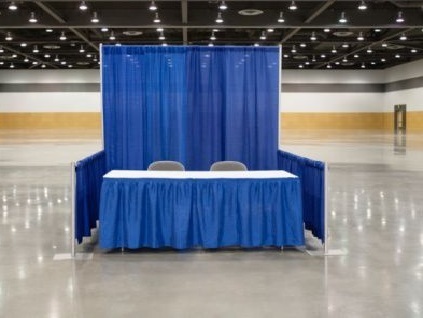 Needless to say, if 'mobile POS' is indeed a trend to watch, security vendors have a long way to go. In fairness, several LP members acknowledged this omission is partly because the trend is new, and partly because the hardline POS vendors do not attend the ‘LP’ show but are featured prominently at the NRF ‘big show’ held early every year. We look forward to seeing how this trend is addressed in the coming months.

Unlike the breakouts at ISC or ASIS shows, the NRF-LP shows appeared to have two fundamental differences:

The NRF-LP group appeared to value these session greatly, to the point that the tradeshow floor was 'closed' during scheduled breakouts. The sessions I attended were held in large rooms, and I would estimate that 200 to 300 people attended each. 'No Press' was permitted in several of the more sensitive sessions, including a discussion on 'Organized Retail Crime' that appeared to be more discussed in subsequent conversations than even the opening keynote address. The sessions I attended were on-point and shared accurate information with a few notable exceptions. I will address some inconsistencies and perpetuated 'IP vs. Analog' myths shared at NRF-LP in upcoming notes.

A few bold claims stood out, with Retail security product provider USS did a good job of raising blood pressure from integrator attendees and capturing the attention of LP departments with the signage below: 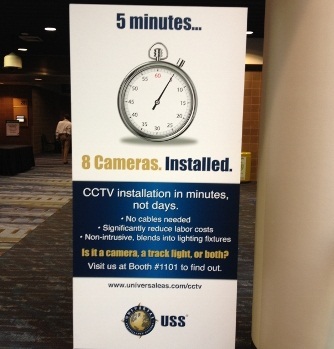 The majority of floor advertisements avoided making outlandish statements and stuck to strict self-promotion without pomposity. However, USS' campaign in particular featured several signs featuring bold thrusts: from challenging companies to accept no more than 5 minutes of integrator labor on invoices, to promoting 'the only completely vandal resistant PVM'. Ads touting the magic of analytics seemed to make the most nebulous claims; a trend that the video industry is not unfamiliar with.

Not to be confused with IPVM, IP based PVMs were a top trend. Several companies featured IP addressable ‘public view monitors’, which have historically featured analog cameras and had limited VMS integration. It is clear that many retailers have road-mapped upgrades to IP video and the specialty accessories market is catching up. 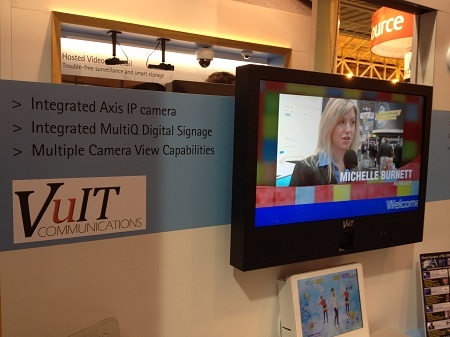 We will profile several of these PVM offerings in upcoming notes. [UPDATE] See our report on these recent offerings in our 'IP PVMs' note.

The demand for analytics appears strong and several conference breakout sessions were dedicated to discussing the topic. Not only encompassing video analytics, these tools are being refined to apply to POS data, logistics transactions, and financial book keeping software. Many vendors prominently touted their analytic packages for finding savings and gaining operational efficiencies. It was clear that 'video analytics' is best used as part of a larger analytics package, and most video products included some form of connection to the POS system. However, some POS-specific analytics packages featured no video integration at all, and when we talked to those companies, they did not seem particularly pressed to include it. 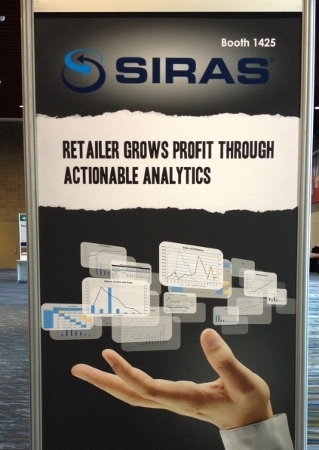 Many small retail-specific vendors exhibited, featuring unique products or services focused on solving security issues. Among them were novel 'anti-sweathearting' devices, sensors designed to defeat common shoplifting techniques, and IP-addressable cash drawers to name a few. Below is an image of an inexpensive 'anti-sweathearting' sensor that can be simply integrated into a wide variety of checkout barcode scanner terminals: 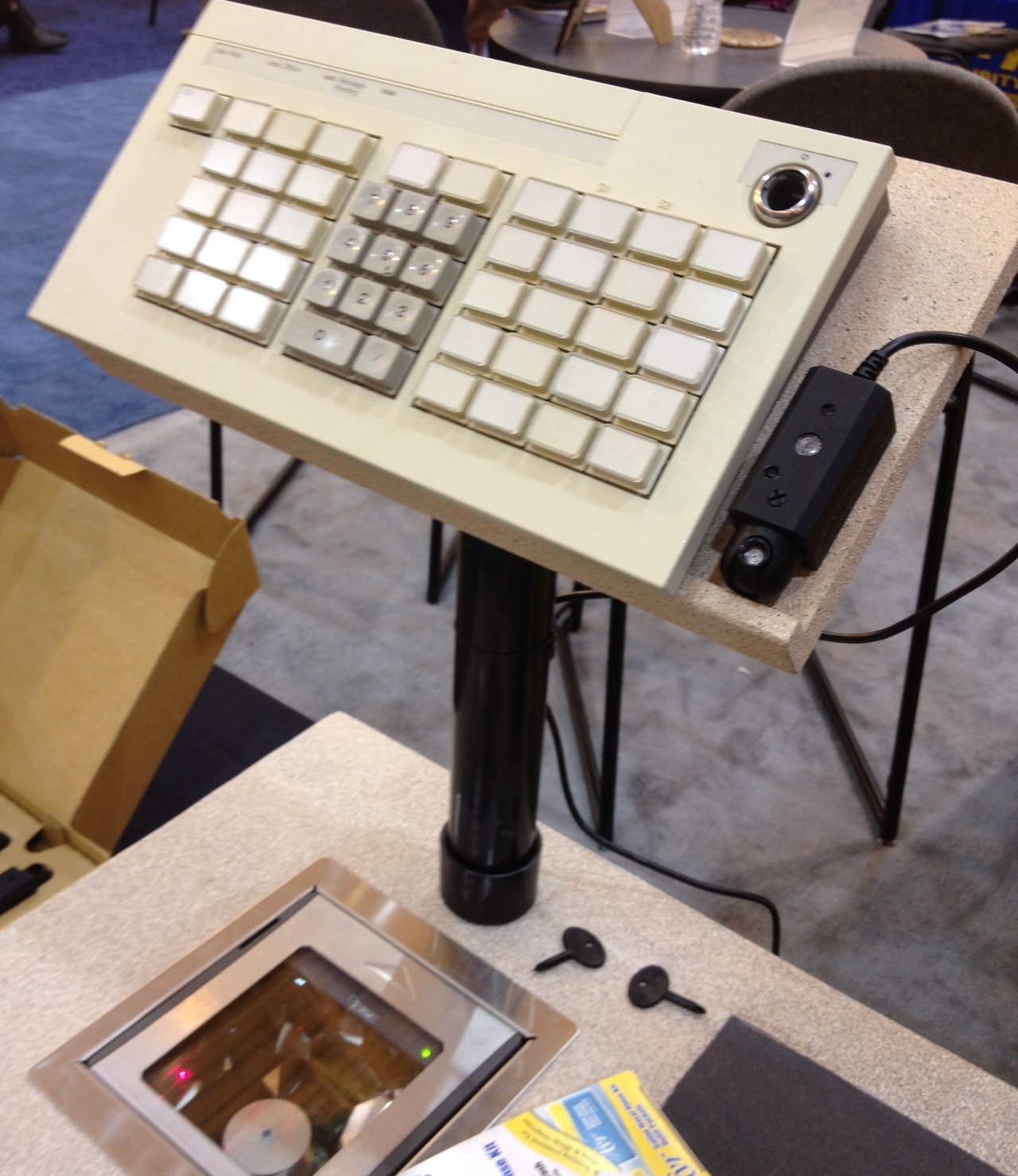 We will cover many of these unique devices and technologies in upcoming updates. [UPDATE] See our review of the 'ScanCam' sweetheart detection sensor for more details.

The most foreboding aspect of NRF-LP were that many ‘big name’ booths that were frequently empty. Even when expo hall traffic was strong, many of the top tier names in security found were as busy as the Maytag repair man. We snapped multiple images to illustrate this: 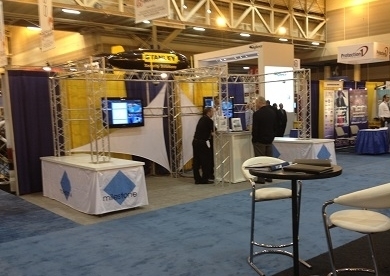 And Sony, with a few people: 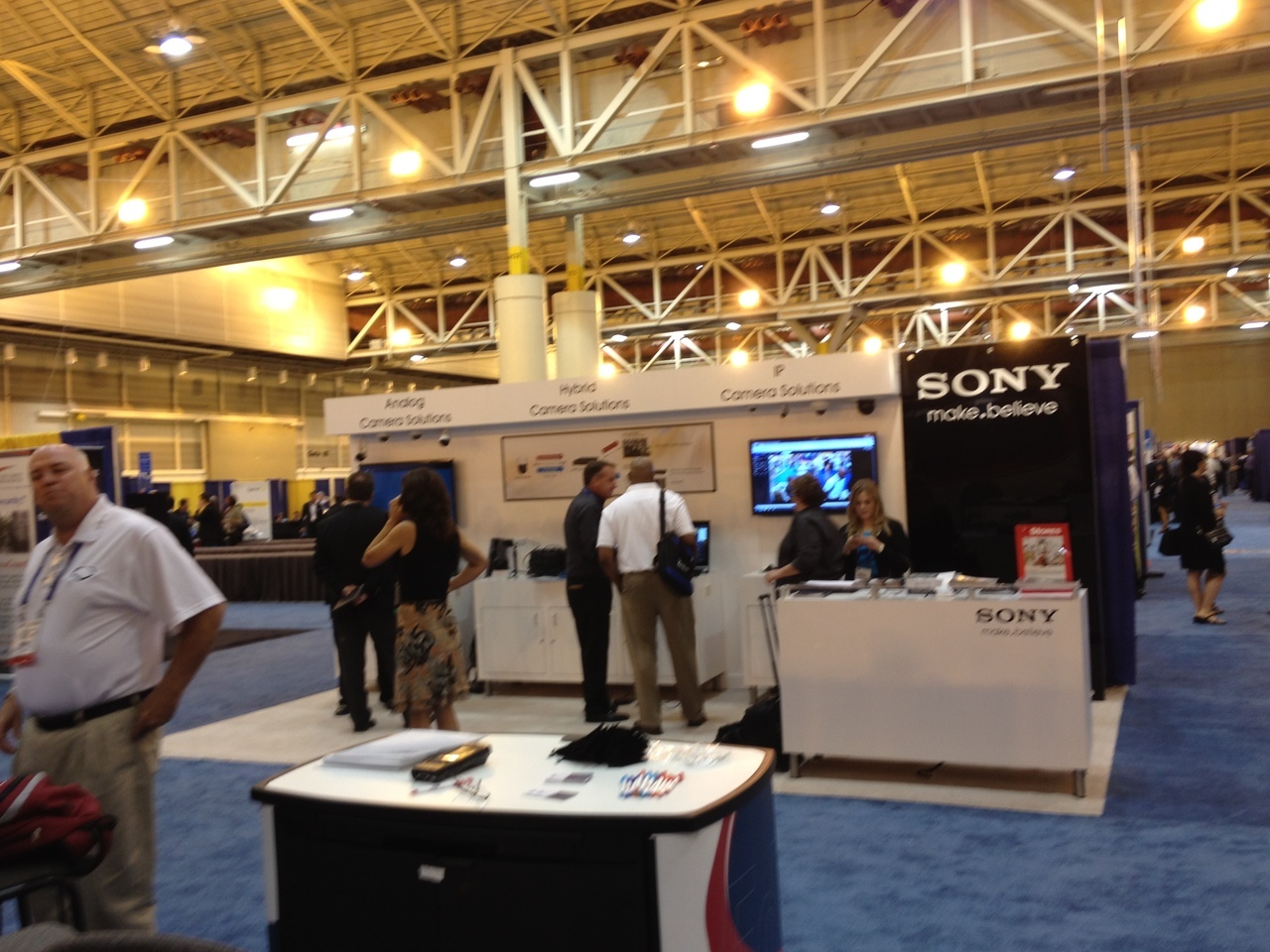 And ClickIt with a big, empty booth... 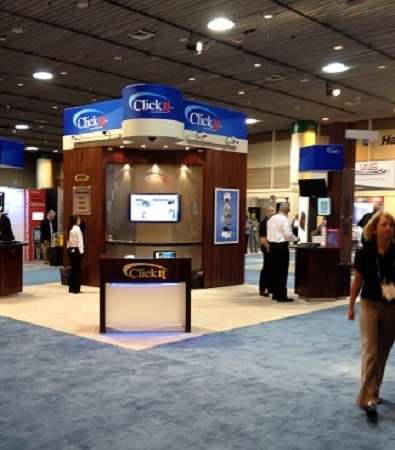 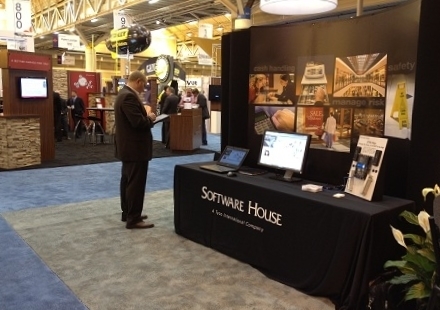 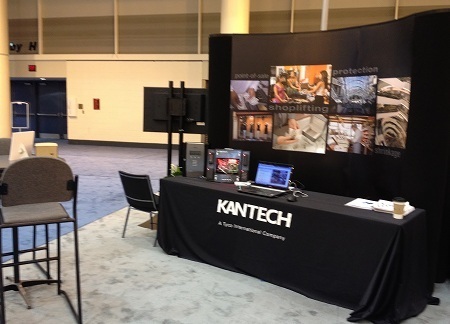 Show floor times were rather limited - only on 2 days and only between 11:30 am and 3:30 pm during those days.

One pleasant surprise was the lack of booth babes, increasing the professionalism of the mostly empty show floor. We asked a number of people and the consensus guess was that, in retail, women have more buying power so vendors are reluctant to offend them. While this is good to hear, the implication for why other shows continue to use them does not speak well of the imbalance of power in the physical security market.

Watch our recorded retail webinar for more commentary and discussion on the show.