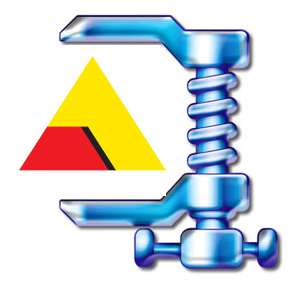 Axis claims that its new Zipstream compression technology can "lower bandwidth and storage requirements by an average 50% or more."

That is quite an audacious claim for such a fundamental element of video surveillance systems.

In this note, we explain how Zipstream works and how it matches up against other bandwidth 'saving' technologies and rival products:

Bandwidth variations, even across cameras from the same manufacturer with the same CODEC, resolution, frame rate and compression can be huge. This is important to appreciate and understand how meaningful or not Zipstream will be.

Additionally, factors such as sharpness, contrast, WDR performance, etc., reveal differing levels of details in different scenes, as we show in our Advanced Camera Bandwidth Test Results. Due to these variations, predicting how much savings Zipstream will provide in all these situations is near impossible.

Dynamic Scene Compression - How It Works

The first of the two key Zipstream features, Dynamic ROI adjusts compression / quantization levels based upon scene content. Moving objects such as people or vehicles may have a quantization level of 27 applied, while the background of the scene such as walls and pavement are more compressed, e.g., a quantization of 35.

The benefit of using different compression levels for different parts of a stream is that 'bits' are 'wasted' on certain portions. For example, you generally want low compression on a face but high compression on a blank white wall is typically fine and saves bandwidth / storage.

The key issue with this technique is how accurate the technology is in deciding what parts of the scene can be applied a high compression without losing meaningful details.

Dynamic I Frame Interval - What It Does

In addition to adjusting compression based on scene activity, Zipstream also adjusts I frame interval. For example, in a still scene with no motion, an I frame may only be sent every 5 seconds or more, since no major changes have occurred in the scene. When someone enters the scene and walks through, however, the camera adjusts the interval to a shorter duration, sending an I frame or more each second.

Axis informs us they are including a "max GOP length configuration that limits how long the dynamic GOP can be." This provides a brake to ensure that very long I frame intervals do not cause problems for VMS systems that depend on regular I frame intervals for search and playback.

In Axis' Zipstream whitepaper, here are their claims for benefits across different scenes: 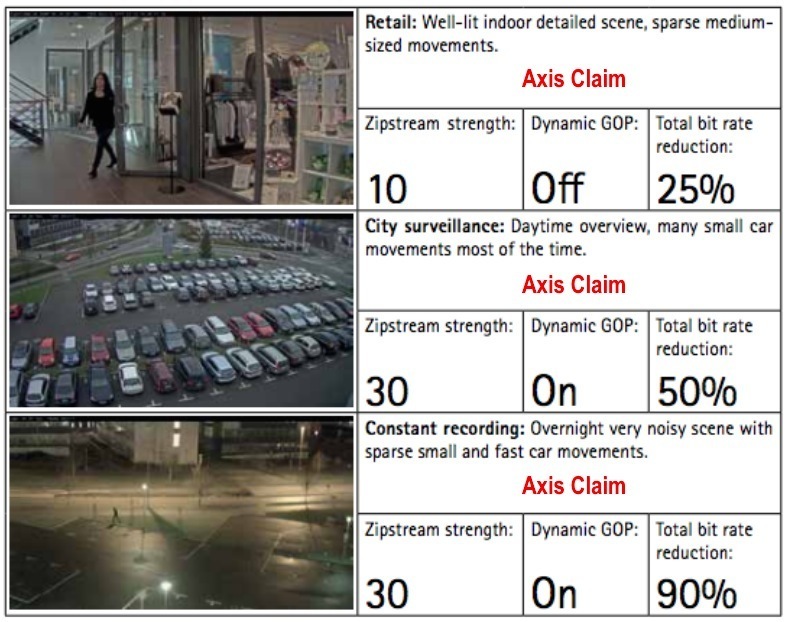 Our interpretation is that:

Almost none of Axis' existing cameras will support Zipstream, severely restraining its usability in the short term.

Zipstream is limited to Axis cameras running ARTPEC-5, which is Axis' newest encoding chip. The only existing cameras that can be upgraded to Zipstream are AXIS Q1615, AXIS Q1635 and the AXIS Q35 Series. However, Axis is releasing a slew of new in April and, of course, regularly releases new models.

Firmware to upgrade existing cameras that are Zipstream upgradeable is scheduled for release on April 9, 2015. We plan to test the Q1615 when this is done.

We see high demand for H.265 but do not expect Axis to adopt it this year. To that end, Zipstream could act as counterforce against smaller rivals rolling out H.265, which is already happening and will surely accelerate throughout 2015.

Note that H.265 key marketing claim is 'up to 50 savings', very similar to Axis claim with H.264. To that end, we anticipate the Axis argument being, 'Why switch to a new codec which lacks VMS support and introduces risks of higher decoding CPU use, when you can stay with the brand you know/trust and a proven codec - H.264.'

Zipstream shares some similarities with Vivotek's Smart Stream, as both dynamically adjust compression on objects in the scene to reduce bandwidth. In our test of Smart Stream, reductions of 15-30% in well lit scenes and up to 50% in low light, both short of Axis' 25% and 90% predictions in these scenes. Additionally, in the Vivotek camera tested, average bandwidth consumption without Smart Stream was far higher than average, so while these reductions were actual, bandwidth remained fairly high.

Arecont's Bandwidth Savings Mode, another bitrate reduction feature, does not adjust compression or GOP as Zipstream does, but instead removes some details from the scene, adjusting greyscale and reducing the number of colors displayed. We found bandwidth savings from 12% to 70% depending on the scene, but multiple image quality issues due to this mode.

Ambarella is the biggest encoder chip provider for high-end IP cameras and their chips (like the S2 and the upcoming S3 H.265) largely shape bandwidth consumption / savings for cameras using them. Ambarella’s chips support optimizations they call “SmartAVC” that extend usable bitrate range downwards, that they claim to be as low as 300 - 750 Kbps for Full HD video. Ambarella customers, of course, have different names for these features.

Two Ambarella customers, Bosch and Samsung, did very well in our 2014 IP Camera Bandwidth / Storage Shootout. We plan to test Axis Zipstream against such cameras.

Zipstream vs Dahua and Hikvision

Neither Dahua or Hikvision market any special bandwidth savings. To that end, Axis may be able to position Zipstream as a reason to pay a premium for their cameras, justifying the price gap / increase of Axis relative to their biggest Chinese competitors.

Far more so than any surveillance manufacturer, given their size and partner numbers, Axis has the greatest ability to move the market with their initiatives (e.g., ONVIF and LightFinder). To that end, we think that Zipstream could spur rivals to launch their own compression optimizations / marketing buzzwords. And in the interim, as LightFinder did for the first 18 months after release, could provide them a meaningful competitive advantage.

Ultimately, though, a significant portion of Zipstream's impact will be based on how much it can really decrease bandwidth without sacrificing storage. We expect to text the Axis Q1615 when new firmware is released in April 2015.