Last weekend, Axis paid for a group of 100+ of the most powerful people in the industry, supposedly independent consultants / AEs that specify many of the biggest projects, on a series of drinking events - including the Corona Beer Burro, Top Golf, and whiskey tasting.

Our annual three-day A&E conference focuses on education and dialogue around the latest industry information, trends and technologies (agenda here). In addition to an agenda filled with educational sessions, there are several social activities intended to encourage interaction and networking between the consultants, Axis and our partners. All activities support our view of responsible business conduct.

When asked about how whiskey tasting, Top Golf, and the Corona Beer Burro fit in with responsible business conduct, Axis replied:

As you can see from the agenda, our event is focused on education, knowledge sharing and networking. As a part of this environment, we and our partners hosted optional social activities after sessions for attendees to give them the opportunity to network. We believe that these activities were kept within a reasonable and responsible level, in relation to the comprehensive educational agenda.

What Axis has so quaintly described is more commonly known as a 'junket' - an artful mix of 'education', marketing and wining and dining that aims to convince, if not bribe, consultants to specify Axis over its competitors.

Axis, of course, did not invent the junket. Junkets are a mainstay of powerful organizations who want to win over supposedly independent people. For example, right now, Huawei is offering a junket to International news media. And in medicine, it is an ongoing concern. For example, pharmaceutical sales reps often buy expensive meals for doctors, making them more likely to prescribe drugs made by the reps' companies, according to one study. This obvious conflict of interest has led to calls to ban the reps from ever setting foot in a hospital.

While the beer burro 'stole the show', Axis deleted the tweet and the pictures of the beer burdened burro. Axis explained to IPVM that "the post was deemed not appropriate", clarifying that it was the "commentary on the post" not the actual beer burro at the 'education' event that was inappropriate.

Here is the Axis beer burro from elsewhere on social media: 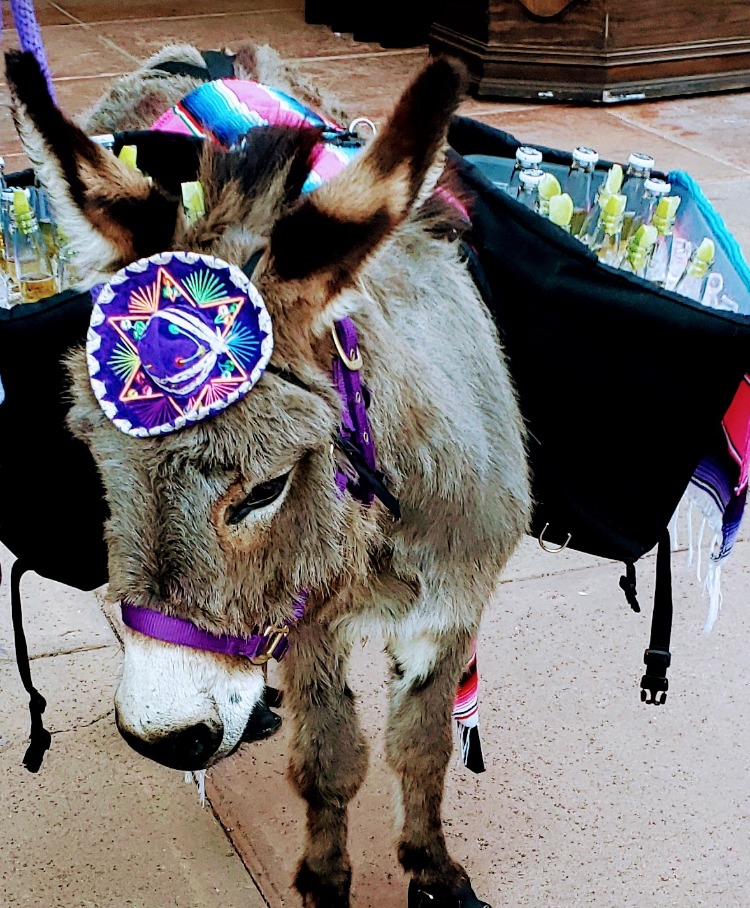 Night 2 was drinking and golfing at TopGolf: 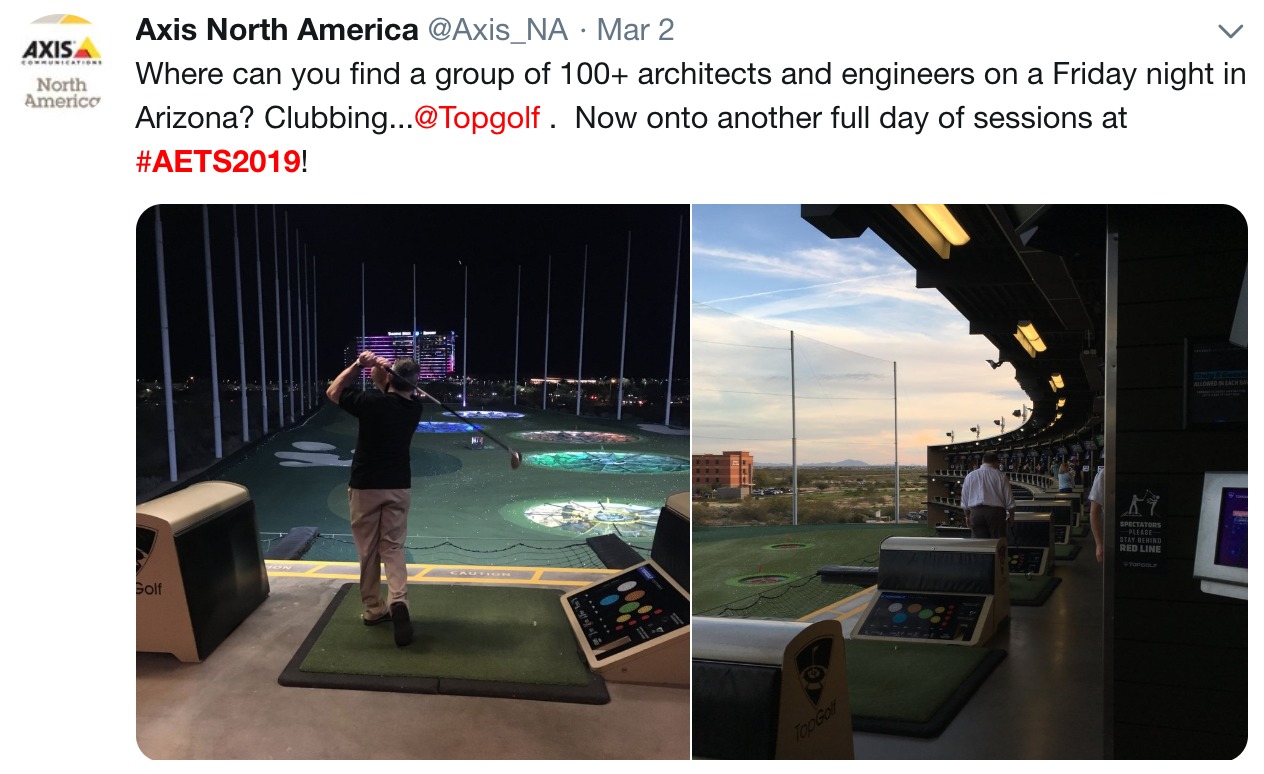 And to tap it off on Night 3 was stargazing and whiskey tasting:

From Axis agenda, below are meals and entertainment highlighted in red: 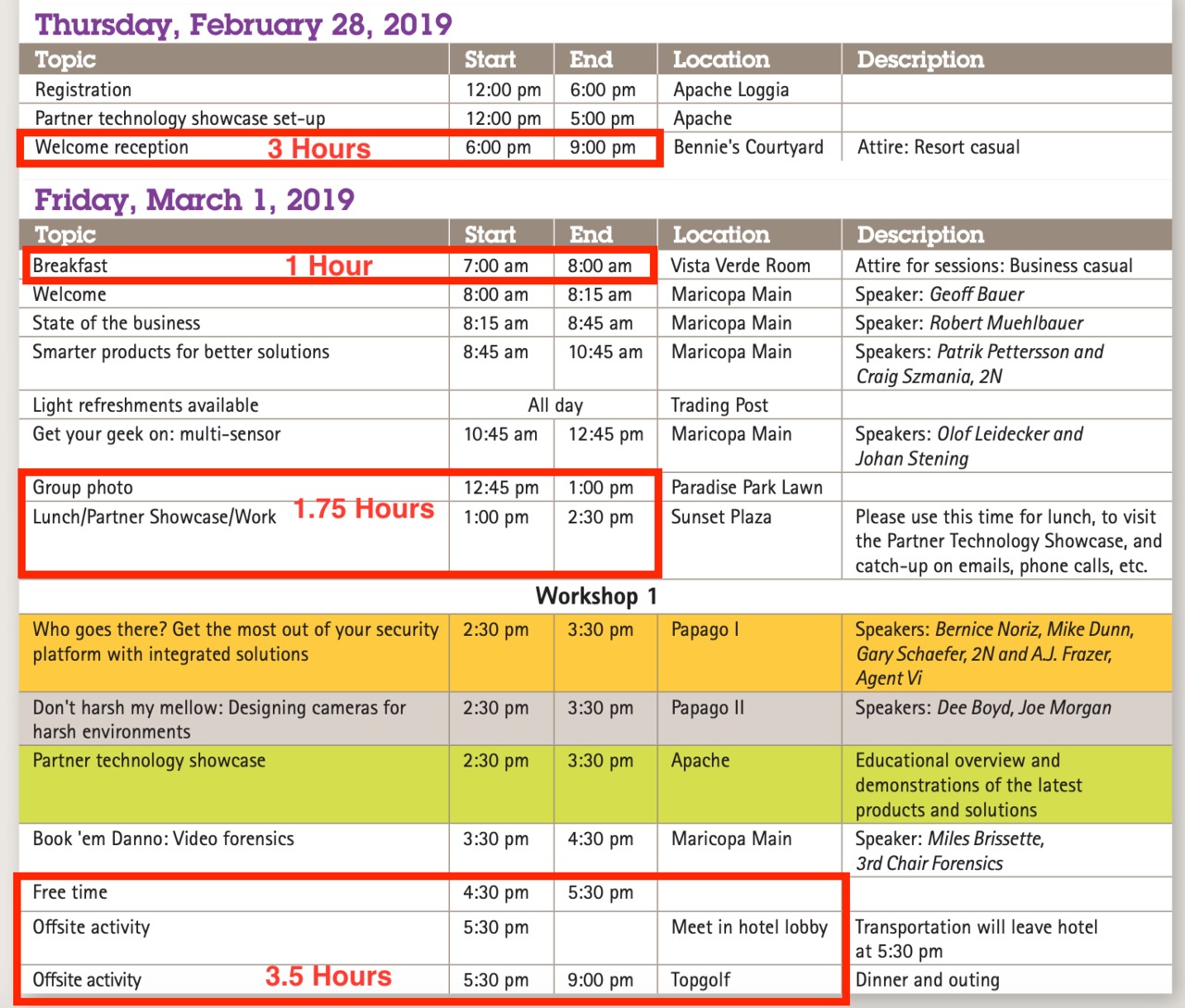 For 6 hours of 'training' time, which are obviously marketing for Axis own products (e.g., 'Smarter products for better solutions'), these 'independent' consultants get a 3-hour welcome reception and 6 hours of meals and entertainment (including 3.5 hours at Topgolf).

In fairness, this event was less disconcerting than Axis versions earlier in the decade (the 'corruption cruise') where Axis paid for consultant's guests to attend. After IPVM criticism, Axis dropped the cruise and required guests to pay themselves.

For this 2-day 'educational' event, Axis covered 3 nights at a 4-star resort as well as 8 meals and entertainment, a cost of easily $1,500, as the breakdown below shows:

Problems With The Axis Junket

Why is Axis spending hundreds of thousands of dollars to 'educate' consultants with this mixture of dining and entertainment? Because Axis wants these people to specify their products. And that is obvious to most industry people. And, to many, that is just the way things are done.

But it gives Axis an unfair advantage, leveraging their billion dollar size. It places these A&Es / consultants in an ethically compromised position that in order to get the 'education' that their rivals receive, they too have to have to participate in this multi-day junket, rather than concisely and compactly getting the specific information they need for their actual job and the customers they should be serving.

Years ago, Axis used to be the upstart challenger. Now, as Axis touted at MIPS, they are #1 in sales, by far, in the Americas. And years ago, people close to Axis would argue they had to do it because they were competing with goliaths who did it. But now they are the Goliath and they are still doing it.

Axis is clearly one of the more ethical manufacturers in the industry and they should live up to the standards for that by really focusing on education and stripping out the drinking and entertaining.

A number of industry professionals questioned why manufacturer events for integrators are not criticized. The difference is that integrators sell products, by definition (i.e., they are 'the channel') and buyers know that, expecting integrators recommendations to be impacted by what products they sell / make more money from (whether that is by dealer discounts or reward trips). By contrast, independent consultants are expected to represent the interests of their end users and not be unduly influenced by manufacturers wanting to sell to those end users.

Hanwha Sends Real Liquor To Virtual A&E Attendees on May 13, 2021
Wining and dining consultants is a longstanding and controversial practice....
Video Surveillance Business 101 on Mar 30, 2020
This report explains the fundamental elements of the video surveillance...
2019 Mid-Year Video Surveillance Guide on Jul 01, 2019
IPVM's new 400+ page Mid-Year Industry Guide brings all of these issues and...
'Independent' Security Consultant Organization Sells Off Speaking Slots To Manufacturers on May 10, 2019
The International Association of Professional Security Consultants (IAPSC)...
Comments (177) : Subscribers only. Login. or Join.