Banking has been an IP camera laggard. Now, IP camera giant, Axis has released a series of video advertisements touting the benefits of IP over analog. Unfortunately, the claims made are quite weak and misleading. In this note, we break down the ads frame by frame. 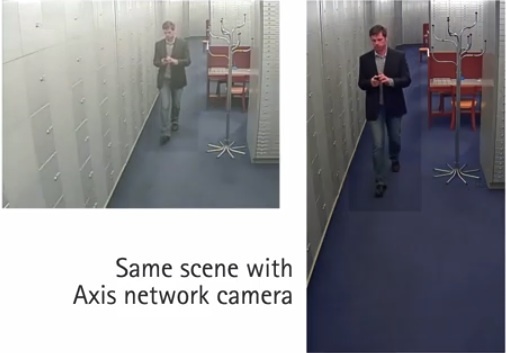 A bank security manager I speak with often (socially) told me 'As long as there are externally recognizable box cameras in the lobby, we (the bank) are satisfied the 'illusion' of high security is palpable enough to bad players we don't need more, (or better) cameras.'

This particular bank, with 15+ local branches, is going to a centralized VMS platform at the current time. However, the main motivation in going 'IP' had more to do with centralizing monitoring and maintenance for the IT department than surveillance performance benefits. In fact, this particular bank is not upgrading any SD analog cameras during the upgrade.

What's a bank branch? Are those the buildings near ATM drive-throughs that people used to enter to stand in line to deposit checks, get cash and check the date on a table with pens on chains?

Seriously though, seems like a shrinking vertical for Axis to single out.

You would think they'd be shrinking, but I see new branches built constantly in my area, and any time I have to actually go to a branch, I stand in line. I don't think for real human staffed branches are going anywhere anytime soon.

There's over 100,000 bank branches in the US. Say they average 10 cameras per branch, that's 1 million cameras.

On the other hand, here's a more negative recent take from the WSJ, estimating that bank branches will decline from ~97,000 to 80,000 over the next decade.

As Ethan notes, I still see many new bank branches being built and I am dumbfounded about it.

That said, I think with IP adoption being so strong in existing markets, manufacturers need to look in other (less promising) areas for expansion.

I am very surprised that a manufacturer sees this vertical as shrinking.

The same way that some of the bigger banks are going for the "Fully automated, we'll charge you for talking to somebody" model, there are a lot of other major banks that have actually increased their direct human customer service presence to cater to the market segment that is tired of dealing with voice analytics hence the large number of new branches Ethan and John mention. Just look at the bank adverts on TV lately, they are all about talking to someone not something.

On the other hand, there are a lot more uses to Video in banking than people may think. There are banking institutions that have benefited tremendously from IP/MP video and content analytics technologies, especially on banking fraud prevention and recovery, internal and external, some to the point of having a return on their investment.

Opposed to a shrinking vertical, I see it as a vertical with tremendous opportunity; one just need to know where to look.

I'm kind of curious why Axis didn't also push their P1214-E covert camera for ATM's and drive-up windows/night deposits. The first picture on their product page for this camera is an ATM.

I've never done any bank installations as they usually have regional/national accounts with companies such as Diebold who specialize in banking facilities. The security and video surveillance systems are a complimentary product to the other systems and equipment that they furnish in a bank branch.

I can't remember the last time I had to go inside a bank branch, or write a paper check for that matter.

Not sure who the bank manager is that you speak with or what bank this is. I work for a large bank in Texas as a Security manager. I also chair a Law Enforcement / Financial Institution Robbery investigation group. The idea that they are satisfied with the big bulky old school box cameras and giving the illusion of high tech is just ignorance. He or she simply does not know what their talking about. For over five years chairing this group and for over 17 years in the industry I have heard the same thing from Law Enforcement, you want us (L.E.) to catch the bad guys, provide better images, better quality images. It is the same thing over and over again. I get BOLO's from L.E. all the time andafter 17 years in the industry I am still amazed at how bad the photos are at other banks. So your friend is probable providing bad images to L.E. and simply does not care.

As far as a shrinking market, I don't see it. In my area banks are building all the time. We are building 3 or 4 a year. We typically also have several remodels going at the same time. Often we will upgrade equipment with a remodel. The other item you may not realize is often many bank buildings are old andbanks may buy a building or vacant lot within a block or two of an existing location and build a new facility and simply move down the block.This is often an oportunity for new equipment.

As far as banks using large national companies such as Diebold, or TYCO this is often true for the large banks such as B of A, Wells Fargo, Chase. Or even your large regional banks may use a large company for integration. However your smallers regional banks and credit unions may not.

Also for all of the integrators who may read this post here is some insider information: Often small institutions will use bank customers to provide a service they require. They often feel that since you were kind enough to provide them with your business they can return the favor and provide you with their business.

Damon, thanks for the feedback!

JohnG, Axis has been marketing the P12s to banking in other venues (like the product page you pointed out and at trade show displays). Next Monday, we are releasing our test results of the P12 vs 3 analog pinhole options so that should give a better sense of the pros and cons for ATMs.

I didn't see the P1214-E info in the marketing materials you posted. I was suprised it wasn't there. I know Axis has been promoting it heavily for use in ATM's.

I won't steal your thunder, I've been tinkering with a P1214 on the bench in my lab, I like it. I haven't mounted it totally covert like a pinhole camera yet, so I'm looking forward to seeing your results. I think it might be useful in police interview rooms as opposed to analog covert cameras (that look like a motion detector, smoke detector or thermostat) with encoders.