Surveillance manufacturers generally only have a single office even in a large country like the US. Now, Axis' ambitious expansion plan has them poised to open six US office "to get even closer to partners and joint customers." In this note, based on speaking with Axis, we examine how this will impact their competitive positioning and their relationships with integrators and users.

The company plans to open six new U.S. offices (Northeast, Mid-Atlantic, Southeast, Midwest, South Central and West). Three new offices are planned to open in 2014. That includes the Northeast office located within Axis’ Boston-area North American Headquarters which opened this week, a Midwest office opening in Chicago planned for Q2, and a West office opening in the Los Angeles-area in late 2014.

Here is a map of the regions the new offices will cover: 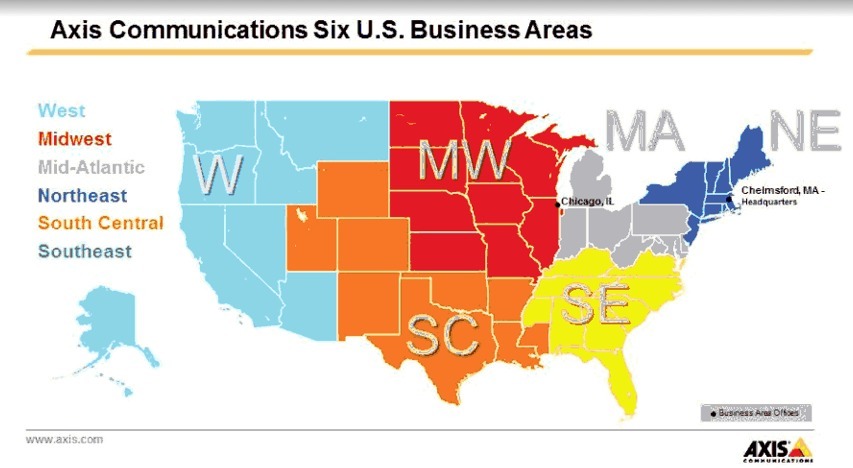 Each location will be around 5,000 square feet and will include a small local team, including "inside sales, regional sales managers, field sales engineers, local trainers and a regional event marketing person." The offices will be led by a Business Area Manager who will report to the North American Director of Sales.

They will be designed similar to Axis Experience Centers and will include space for training, demos, meeting as well as offices in the back.

The Americas account for roughly half of Axis' $700+ million USD annual revenue. The US operation, even if it was its own company, would still be one of the 10 largest surveillance manufacturers in the world.

Axis reports ~50 regional sales managers and ~200 US employees. As a result of 30 recent promotions, there are a number of open positions in their North American offices as well.

Having offices closer to integrators, Axis believes will make it easy to train and demonstrate new products. With a relatively short commute, integrators can get up to speed with what is new and try out new products set up at the regional offices. “We usually rent rooms in hotels for training, but we think it would be more effective with our own space,” the company says.

Having regional offices would make it easier for Axis to reach out to end users. “Some of the large customers want to have a relationship, they want to have people to talk to. Even though all the business goes through the integrator they want to make sure they understand what’s going on,” Axis says.

Many integrators want to keep manufacturers as far away as possible from 'their' customers. Having physical facilities closer to end users, makes it easier for Axis to communicate with, demonstrate and promote Axis products, without depending on an integrator.

However, Axis says it sees this as a benefit for both end users and integrators. “For the integrators we work closely with, this is an opportunity to drive more business to them,” Axis says. Axis says the offices will benefit integrators by giving them a place they can do training or demos with new equipment. The company also points to its history of not going around partners as a reason integrators should not worry.

Leveraging its much larger size, Axis should be able to market more effectively with regional offices, helping to drive more business with enhanced local demonstrations, trainings and meetings. And given the cost of running such facilities, it is something that few can potentially match.

So while this is unlikely to be a trend overall for other manufacturers, it will make Axis have more control over deals, especially larger ones, and less dependency on integrator selling.

Update: Axis disagrees with our conclusion, emphasizing that, "We’re 100% dependent on the channel for sales. Integrators and other partners have been asking us for more and more local support, customized trainings, sales resources, product refreshes, etc. to better educate their teams to help drive sales for them."