If there was any doubt, Axis' most recent financial results should erase them. Axis is now in the midst of an extended, multi-year period of slow growth. While the company trumpeted top spots in various rankings, their financials paint a far more modest and troubling picture. In this note, we break down what is happening, what is working and where Axis is most struggling.

The most significant details disclosed in their financials include: 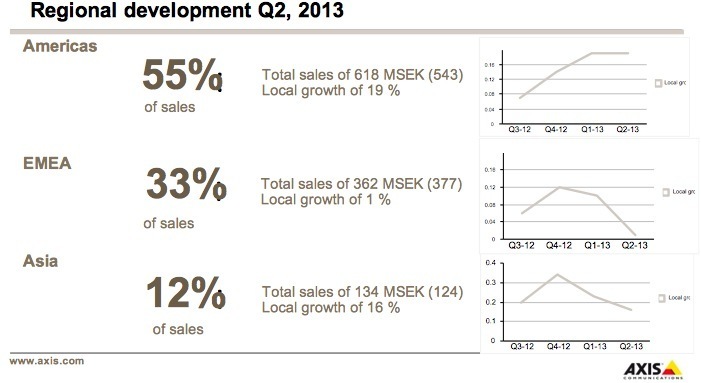 Axis acknowledged that Hikvision and Dahua were the market leaders in China, a market that Axis finds as 'extremely important'. While Axis aims to "be clear market leader" in Asia, they offer no real plan to achieve that.

When asked whether Axis was taking or losing market share, Axis equivocated saying they "were doing reasonably well in the Chinese market."

Axis says they aim to grow twice as fast in emerging markets than developing ones, though this has not been occurring recently.

When asked about monetizing analytics, Axis mentioned their traditional partner based approach (like ACAP) but also noted potential opportunities to do it themselves either included or sold as add ons.

Axis says there is rather 'flat development' with increases in unit sales offset by decreases in product pricing. Said 'camera sales are much bigger" than encoder sales but would not specify any details beyond saying encoders were over 10% of revenue.

Axis denied that resolution was the top market driver, emphasizing the importance now of image quality, calling out its Lightfinder feature.

The Future of Axis

In the short term, on the Investor's call, Axis noted that "project pipeline similar pace to last 4 or 5 quarters," which implies not to expect much acceleration above the current range.

The longer term guidance to investors from the report is:

As we examined in the China Surveillance Skew, we are skeptical of applying global projections. Unless Axis can prove that it can be a major player in Asia (i.e., the biggest 'emerging markets'), it is hard to imagine how it can approach that growth rate.

A key issue for both smaller installations and emerging markets is price sensitive, minimal feature set buyers. Neither of these are historical Axis strengths. While Axis has an attractive 'no VMS' offering in Camera Companion and has made great strides in introducing low cost cameras, in the last year, many more lower cost offerings have undercut Axis, from the emergence of Dahua, to a revival of ACTi, plus the continued expansion of Hikvision, Vivotek, etc.

Though Axis introduced a number of solid incremental new products in the last year (most notably the covert P12 offering and their first panoramic), the market is catching up on Lightfinder (with better low light offerings, more integrated IR options), and their vision of apps everywhere on cameras has made little progress.

Axis still offers the 'safest' and broadest array of IP cameras on the market but if they are to match or outgrow the market (at their already large size), they are going to need to reinvigorate their offerings in the next year.