IPVM has recently tested new super low light, super low cost offerings from Hikvision and Dahua, and in this report we see how Axis' 1/2" Lightfinder model, the Q1635, stacks up.

We tested it against other large imager super low light models from Dahua, Hikvision, and Samsung, and past 1/3" low light leaders from Axis and Samsung in multiple scenes, including outdoor low light scenes including a dark field area (left) and a moderately lit parking lot (left):

However, it produced dimmer images than other 1/2" models tested, which may make it less suitable in very low light (below 0.1 lux), where details are not required, only detection. Those looking for very brightest imaging in these scenes are likely better served by Hikvision or Dahua 1/2" models.

For those looking to stay in the Axis line but requiring the absolute best low light (non-IR) performance, the Q1635 offers better imaging than any other Axis model we have tested.

Competitively, the challenge will be choosing from close low light performance, better bandwidth but significantly higher pricing of the Axis to Dahua, Hikvision and Samsung.

The Hikvision DarkFighter 6026 produced the overall brightest images, though introduced noticeable blurring in low light when using the F0.95 Hikvision DarkEye lens, reducing details to the levels of other cameras.

The 1/2" Q1635 performed significantly better than the 1/3" Lightfinder model, the Q1615, in low light scenes aside from very dark (<0.01lx) where both captured only a black image. 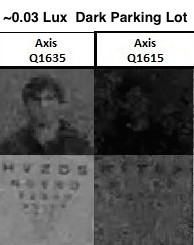 The Q1635, due to Zipstream features, had by far the lowest bitrates of all 1/2" super low light models, under 1 Mb/s at ~0.01 lux. Hikvision and Dahua consumed 8-9x the bandwidth.

This pricing is significantly higher than many 1/2" models, such as Dahua, Hikvision, and Samsung, more in line with models such as the SNC-VB635, Sony's 1/2" competitor.

This video reviews the physical construction of the Q1635. Note that hardware/software features are nearly identical to the Q1615, with the major differences being the larger imager and corresponding lens (F1.6 C-mount with adapter ring). This lens is nearly as large as Hikvision's F0.95 DarkEye lens, much larger than standard lenses.

The Q1635 and Q1615 both include advanced gyroscopic features, such as image stabilization, shock detection, leveling assistance, etc., detailed in our test of the Q1615.

The photo below shows the relative size of the Q1635's image sensor (1/2") compared to the Q1615, noticeably smaller. 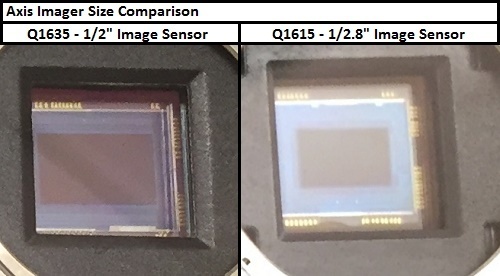 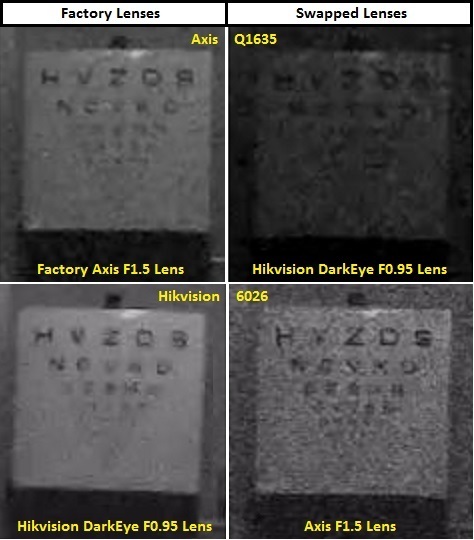 We tested the cameras in two real world outdoor scenes, first looking across the rear of a building/open field, about ~0.01 lx. No outdoor lights from the building were turned on. 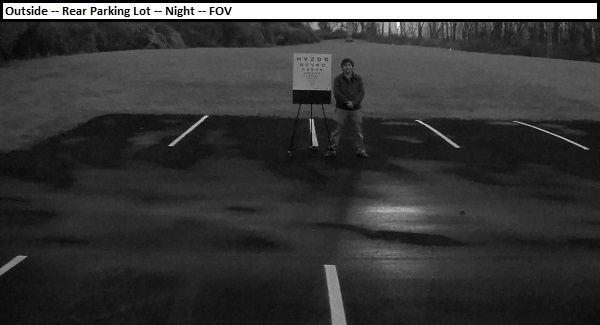 In this scene, the Q1635 was dimmer than other 1/2" imager models tested, though details delivered are roughly similar due to the increased noise in other cameras and blurring of the Hikvision lens. It is notably brighter than the 1/3" Q1615, which produces no image of the subject.

Forcing cameras into color mode at night, performance decreases in all cameras but the Hikvision DarkFighter model. In this camera, the increased color definition makes our subject's outline clearer against the green grass background.

Next we tested the cameras in a lit parking lot, ~0.3lx on target, relatively bright, seen here: 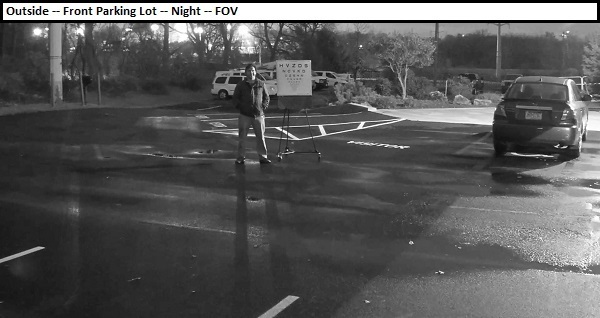 Due to the relatively bright lighting in this scene, performance of all cameras is closer, with the subject and chart easily recognizable in all cameras in a ~35' HFOV.

Slight differences become more pronounced when the FOV is widened to ~70', though relative performance is again much closer than in lower light scenes. In this scene, only the Axis cameras do not wash out the chart, while all other cameras tested did, to varying levels, with the 1/2" Samsung SNB-6005 being worst.

Forcing the cameras into color mode, performance is similar to monochrome. Colors in this scene were not as pronounced as in the field scene, with its green grass background. Most objects were black, white, brown, etc., in this FOV.

Indoors, at ~0.05 lux, results are similar. Hikvision Darkfighter provides the clearest images in this scene, followed by the Dahua starlight model. None of the other cameras produced usable details of our test subject.

In very low light, below ~0.01 lux, only the Hikvision and Dahua cameras produce images at all.

The Q1635 had the lowest low light bitrates of any camera in this test, due to Zipstream, consuming less than 1 Mb/s at both ~0.3 lux and ~0.01 lux. The next lowest 1/2" super low light model was the Hikvision DarkFighter 6026, which includes their H.264+ smart CODEC (similar to Zipstream). Note that both Samsung models spiked dramatically in very low light, maxing out bitrate to their caps (~32 Mb/s and 16 Mb/s in the 6005 and 6004, respectively). 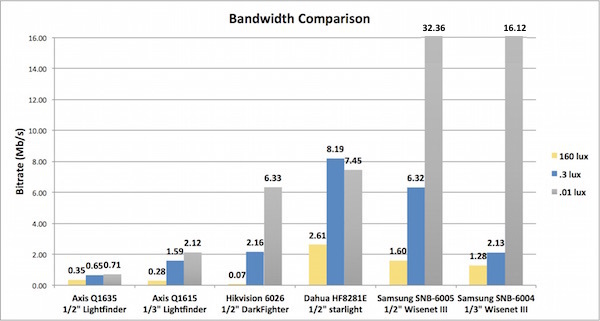 Hanwha ExtraLux Camera Tested on Jan 11, 2018
Hanwha has released the latest in their Wisenet X line, the "extraLUX"...
Axis Door Station Tested (A8105-E) on Jul 19, 2017
Axis continues their push into niche markets, especially audio, with network...
Axis 20MP Q1659 Camera Tested on Jun 13, 2017
Axis has joined the super high resolution camera trend with their Q1659, a...
WDR Shootout 2017: Low vs High Cost Cameras on Jan 24, 2017
Multi-exposure WDR was once only available in expensive cameras but in the...
Avigilon Pro 4K Camera Tested on Jan 03, 2017
Avigilon is best known for their large sensor, high megapixel cameras. But...
FLIR Favorability Results 2016 on Dec 14, 2016
FLIR has been buying companies one after the other, expanding from its...
Testing EF Lenses On IP Camera on Nov 23, 2016
Glass. IP cameras are often characterized as using lower quality 'glass' and...
Sony 35mm Super Low Light Camera Tested on Oct 31, 2016
Sony is making a big push for their SNCVB770 camera, touting its low light...
Ambarella Pushing These IP Camera Trends on Apr 13, 2016
Will the market soon be ruled by H.265 and 4K Multi-sensor...
Hikvision H.264+ Tested on Feb 10, 2016
Is 'regular' H.264 soon to be a thing of the past? Last year, Axis started...
Axis vs Avigilon vs FLIR vs Hikvision vs Samsung Camera Pricing on Feb 03, 2016
The 'race to the bottom' is a big issue, with average prices dropping sharply...
An Inside Look Into Dahua on Dec 16, 2015
Dahua is the 'other' billion dollar plus Chinese manufacturer. Large in its...
Testing Samsung 1/2" Wisenet III Camera on Dec 01, 2015
Continuing our series of 1/2" super low light tests, in this report we look...
Comments (19) : Subscribers only. Login. or Join.