Axis is feeding into that with its latest release, the Q1635, a 1/2" imager camera that includes the high end features of the Q1615 (see IPVM Q1615 test results) but claims better low light performance.

In this note, we examine the features, the low light specifications and how it compares to other large imager cameras from Sony and Arecont.

The Q1635 has a 1/2" imager compared to the 1/2.8" imager in the Q1615. The other major factors are the same: resolution (1080p), physical form factor, Lightfinder, Forensic Capture (Axis' latest WDR variant), and high end features such as gyroscopic shock detection, leveling assistance, and auto-flip. 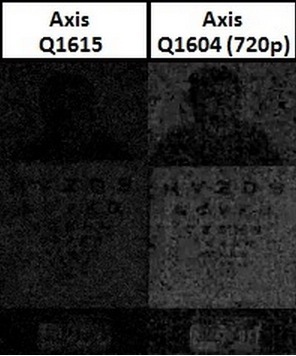 However, Axis points out that the Q1635 ships with an F1.5 lens. By contrast, other Q series box cameras include F1.2 or F1.3 lenses, which allow about 30-50% more light than F1.5. Axis projects that lower F-stop 1/2" lenses should be released in the future, improving low light performance beyond that of the Q1604.

The Sony Super Sized Low Light Imager is one of few competitive models including a larger 1/2" sensor. The SNC-VB635 sells for close to the same price as Q1635 without lens, ~$1,250 online, and also includes true WDR, though lacks the gyroscopic bells and whistles.

Note that a number of other manufacturers also use 1/2" sensors, but many of these models are dated (such as Arecont's older MegaVideo line), with poor low light performance relative to current generation cameras with smaller sensors but much improved processing.

See our report Wrong: Why Imager Size Is NOT Key To Low Light for information on these factors.

Due to its high price and high end features most users do not use, we expect the Q1635 will be a niche offering. Those with higher budgets seeking top low light performance at 1080p will be most interested.

Like the Q1615 before it (and the Q1604 before that), the Q1635 continues Axis' trend toward the high end, adding more "boutique" features for those seeking them, and further solidifying them in the high end of features.