Axis core focus is the high end of the market. Their newest high end camera, the Q1615, aims to continue that, with claims of industry leading image quality and novel features, such as:

The Axis Q1615 sells for ~$1,050 USD online. This is similar to other top tier 1080p cameras, though notably more expensive than high end models from Samsung or Hikvision, which sell for about half the price. Note that no other cameras listed here include features such as auto rotation, shock detection, focus or level assist.

The Q1615 is best for full light and WDR scenes but, despite its Lightfinder claims, is not strong in low light.

The 'bells and whistles' included, like auto-rotation, focus / level assist, etc. have some value, but are not obvious 'gamechangers'. One will have to assess how useful / important those features are to one's specific needs.

The Q1615 is still strong overall competitively, like its predecessor Q1604. However, in the past 2 years, between these two camera's releases, competitors have clearly closed the gap significantly while Axis has not dramatically improved from the previous generation to the Q1615.

In this video, we outline the physical construction of the Axis Q1615.

Here we contrast the physical size of the camera:

The web interface of the Q1615 is predominantly the same as other Axis cameras. However, there are several new options included for their advanced features, which we examine here.

The gyroscope included in the Q1615 allows it to automatically detect orientation. This makes corridor mode installation automatic, as users simply rotate the camera 90 degrees, without the need to change any options in the web interface.

The Q1615's electronic image stabilization is intended to reduce the effects of vibration and small camera movements. In addition to simply an on/off control, the Q1615 includes a control to match EIS settings to lens focal length for best performance.

We found that EIS compensated for small movements, but was not as effective as other cameras' EIS which we've tested, such as the Samsung WiseNet III.

The Q1615 includes shock detection in addition to other camera tampering functions, which detects impacts to the camera with adjustable sensitivity. On alarm, the camera may display a text overlay, send emails, TCP serial strings, or other functions supported by Axis' events settings.

These two options allow installers to aim and focus the camera without the use of an installation monitor. To enter these modes, users press and release the function button on the rear of the camera for focus assist, or hold for 3 seconds for level assist. Once activated, the camera will beep more rapidly and the LED turn green as the camera approaches focus or level, and turn from amber to red, beeping more slowly when out of focus or off level.

These features are demonstrated in this video:

Finally, Axis has included barrel distortion correction in the Q1615, intended to compensate for wide fields of view, which result in straight lines become warped and curved. We recommend using the feature only to correct for slight curvature, as large amounts of correction reduce the field of view as the image is zoomed and flattened, seen in this comparison. A ~4' region on each side is lost in this example. 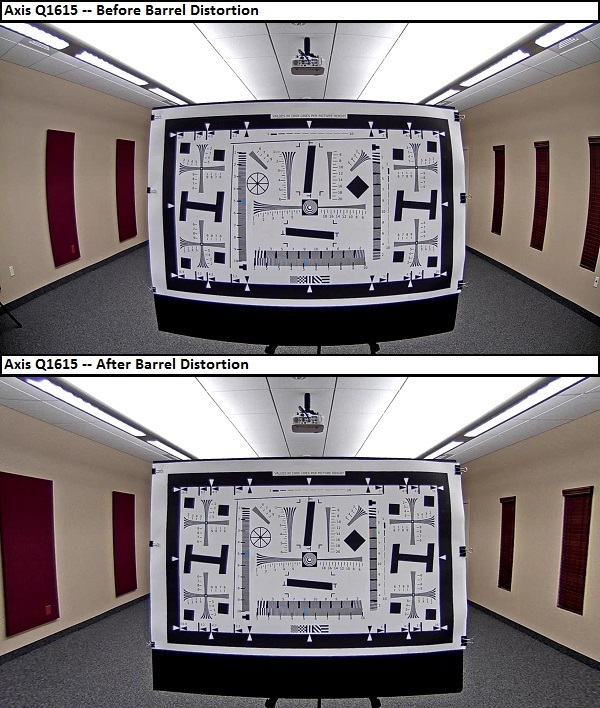 This video shows how to configure this correction and different settings in real time:

These comparisons show the Axis Q1615 versus competitive cameras, as well as its predecessor, the Q1604, in our indoor test scene. 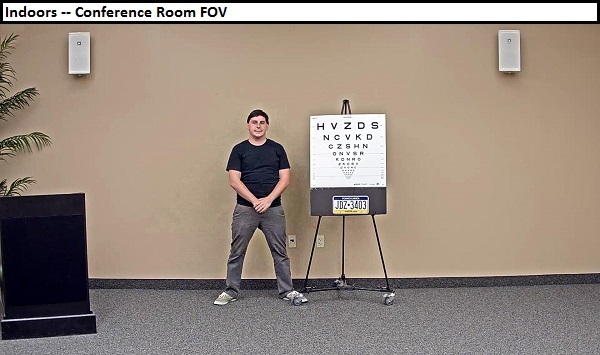 In full light, ~160 lux, the Axis Q1615 provides some of the best detail in these scene, with fewer shadows around our subject's features, making him more recognizable.

With the lights turned off and the scene below 1 lux, the Q1615 is one of the worst performers in this test, with no usable images of our subject, and line one of the chart barely legible. Note that the 6 Series Panasonic WV-SFV631L includes built-in IR illumination standard, which other cameras in this test do not.

Finally, we checked WDR performance in a warehouse scene with subject against strong backlight as well as the dark area beside the open door. 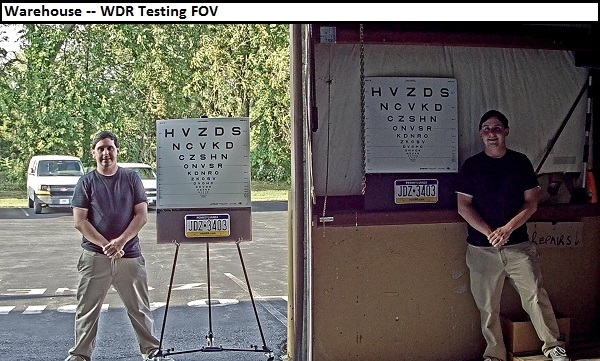 With our subject against a brightly lit open overhead door, the Q1615 provides average images of the subject, roughly on par with the Sony SNC-VB630, and outperformed by the Bosch, Panasonic, and Samsung models. However, performance is much better than the Q1604, which shows heavy shadowing on the subject's face. Next to the door, the Q1615 is one of the top performers, along with the WV-SFV631L. 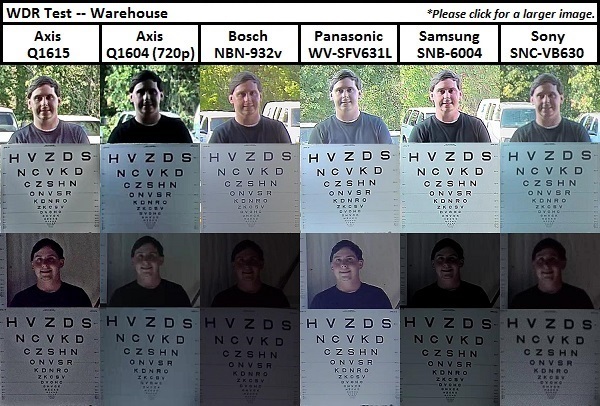 The Q1615's bandwidth performance is average in full light, ~130 lux, slightly lower than the Bosch 932V and Panasonic 631L, and very slightly higher than the Samsung SNB-6004.

In the dark, below 1 lux, its bitrates are some of the highest in this test, close to the NBN-932V, and slightly lower than the SNB-6004. The Sony SNC-VB630 is lowest among non-IR 1080p cameras, ~1.75 Mb/s lower than the Q1615. Unsurprisingly, the Panasonic WV-SFV631L has the low bandwidth consumption in this test due to its included IR.

Listed are the firmware versions used for each camera:

Axis 'Best' Q3517-LVE 5MP Camera Tested on Feb 05, 2018
Axis boasts of its Q3517-LVE: Simply put, AXIS Q3517-LVE delivers the best...
Axis Door Station Tested (A8105-E) on Jul 19, 2017
Axis continues their push into niche markets, especially audio, with network...
Hanwha Low Cost WiseNet X Camera (XND-6010) Tested on Apr 13, 2017
IPVM bought and tested the lowest-cost WiseNet X model, the indoor 2MP fixed...
WDR Shootout 2017: Low vs High Cost Cameras on Jan 24, 2017
Multi-exposure WDR was once only available in expensive cameras but in the...
Goodbye Samsung, Hello Wisenet X on Jan 23, 2017
Samsung is gone but Hanwha is back. Their latest generation Wisenet X [link...
Testing Axis' 1/2" Q1635 Camera on Nov 23, 2015
Low light performance continues to improve, first driven by advances in image...
Hikvision Darkfighter 1/2" Imager Camera Tested on Aug 31, 2015
Can Hikvision beat Axis and Samsung in pure low light? The Chinese...
Axis WDR Zipstream Low-Cost M1125 Tested on Aug 26, 2015
Axis has been busy promoting speciality devices like IP horns and video...
Corridor Mode Tested on Jun 03, 2015
HD 'widescreen' aspect ratios are increasingly becoming the norm for video...
The New Post-Milestone OnSSI Tested on Jun 01, 2015
OnSSI surprised the industry earlier this year by acquiring rival VMS company...
WDR Camera Shootout 2015 on May 04, 2015
This is the most comprehensive Wide Dynamic Range (WDR) IP camera shootout...
Uniview Starlight Camera Tested on Apr 28, 2015
The company claims $263 million in 2013 revenue and to be the third largest...
Testing Axis Zipstream on Apr 13, 2015
Has Axis found its breakthrough differentiator? Can they demand a premium for...
Axis VMD3.0 Analytics Vs Avigilon Tested on Jan 12, 2015
Axis has released the next generation of their advanced video motion...
Axis Camera Down-Tilt Auto-Measurement on Jan 06, 2015
Tilting a camera too much can create problems. Most commonly, it undermines...
Axis Large Imager HD Camera (Q1635) on Dec 16, 2014
Many surveillance professionals love large imagers. Axis is feeding into...
Axis 4K Tested (P1428E) on Oct 29, 2014
[UPDATE August 2015: We recently updated firmware on this camera for an...
Axis In Denial, Q3 2014 Financial Report Bad on Oct 16, 2014
Axis Q3 2014 numbers are bad. But their outlook is still rosy. [Update: And...
Fall 2014 New Products Directory on Sep 23, 2014
New releases are weak this year, and unfortunately, the trend does not appear...
Axis Bells and Whistles Box Camera (Q1614) on Oct 30, 2013
Axis has announced a next generation version of its popular Q1604 camera that...
Comments (10) : Subscribers only. Login. or Join.