In the past year, Axis has advocated improved image quality versus more 'megapixels'. The two cameras most central to that are the Q1602 Lightfinder camera and the Q1604 WDR camera. In this report, we share test results of the Q1604.

We focused our testing in the two areas we have found the most challenging and differentiating for surveillance cameras:

Below is a sample of the image comparisons we conducted: 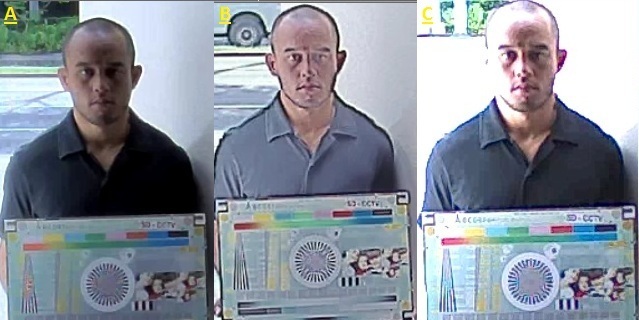 In our test, we examined:

The Axis Q1604 is a strong overall camera that will be very competitive in professional / enterprise applications looking for both low light and WDR performance. However, if you want the Q1604's best low light performance, you must manually configure the camera to turn off WDR mode at night.

The main barrier for the Q1604, with an MSRP of $999 USD, will be price. While the technical attributes are strong across the board, the pricing is roughly $200 more than similar cameras in its category (Sony CH140, Pelco Surevision 1.2MP, etc.). On the one hand, it is not a huge price difference but it is likely enough for most users to be a serious issue to consider.

The secondary barrier for the Q1604 is that it is only available in a box form factor. If you require a fixed dome, Axis does not have an option in the Q series. By contrast, typically competitive offerings do have.

Compared to other leading Axis cameras:

Given the performance of the the Q1604, this impacts our results for previous MP Low Light shootout and MP WDR shootout. We plan to do a full re-shoot when the upcoming Panasonic and Bosch MP cameras are released in the next few months.

Turning off WDR mode is a 3 step process in the camera configuration (see this zip file for screenshots of the steps). It is a manual process and not simply clicking a button. Also, we do not think it is prominently posted in the public technical documents. We asked Axis specifically about this and that is how we found out.

Because the Q1604 has much more aggressive gain levels and defaults to VBR and WDR on, Q1604 bandwidth consumption can soar in low light to as high as 15Mb/s - about 3 times what the P1344 consumes in the same scene. Be careful as this can cause serious problems. Here are 2 main steps to rectify:

We did a number of WDR tests in various scenes. In the following images, we show the results of a common use case - a person walking through a doorway inside a building.

In the first image, we have the subject beginning to enter the door. Notice the Axis P1344, a camera without WDR, has significant washout. The other 3 cameras, with WDR, do not have washout. However, the Axis Q1604 is the only one without significant artifacts. 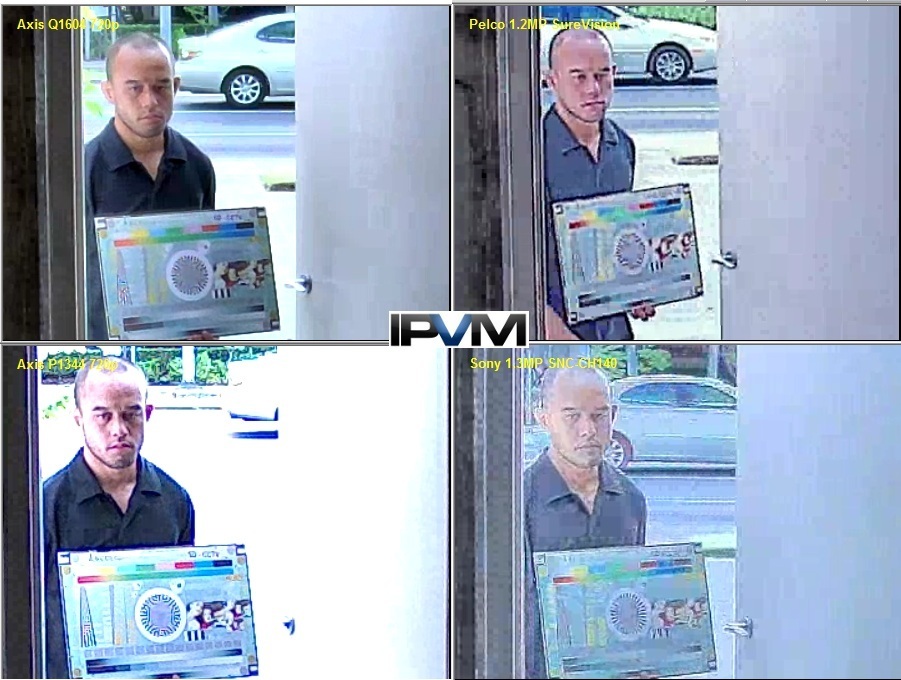 In the next image, we have our subject standing in the middle of the doorway. In this shoot, the non WDR P1344 still has significant washout. The Sony here provides the clearest image of the subject's face. 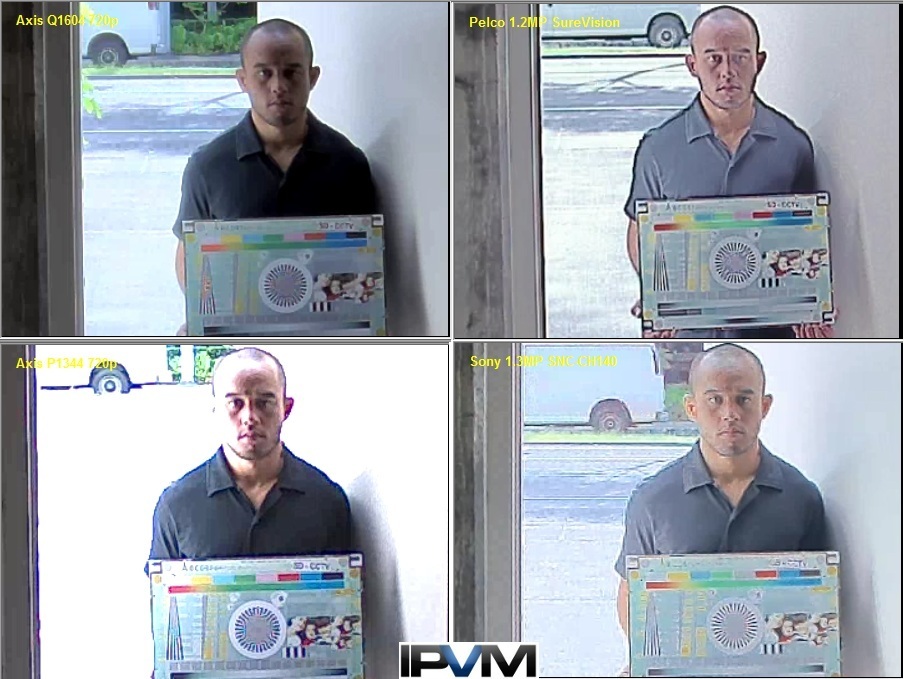 Finally, we have our subject walking inside into a darker area. All the cameras struggle more here. The Axis Q1604 does the worst of the 3 scenes with nearly no facial details. While the Pelco and Sony both have artifacts, they do deliver some facial details. 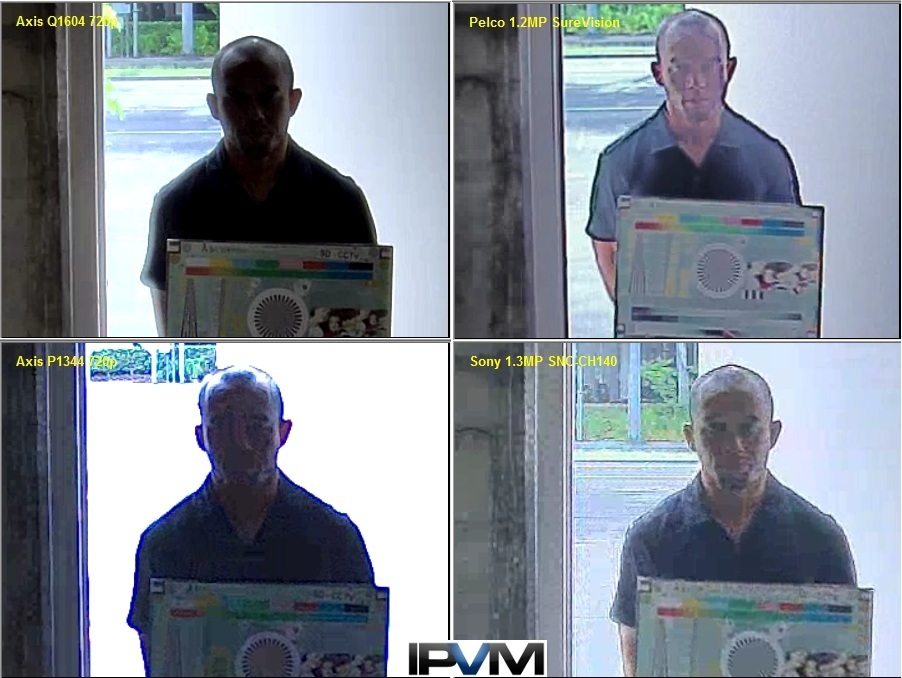 In the comparison below, we have the Axis Q1604 with its default settings (WDR On - 1/44s) versus other MP cameras at 1/30s exposure. Note: With WDR on, the Axis Q1604 cannot have a slower shutter speed than 1/44s. Despite this, the Q1604 is quite competitive with all cameras and far better than Axis's current generation P1344.

The Q1604 has more aggressive gain options than the P1344. For example, the max gain control on the P1344 is 35dB while the max on the Q1604 is 42dB. All cameras are tested with their default allowable max gain controls (which is typically the max overall supported).

In the comparison below, we turn off WDR on the Q1604 and set its exposure to 1/30s just like all the other cameras. The Q1604 image quality improves greatly and is now clearly displaying more details than any other camera in the comparison.

The goal of the Wide FoV shootout is to measure any differences in daytime / 'megapixel' performance. In the first comparison, our subject is an ~80 foot wide FoV (roughly 15ppf). The details are close though it appears that the P1344 is capturing slightly less than the others. 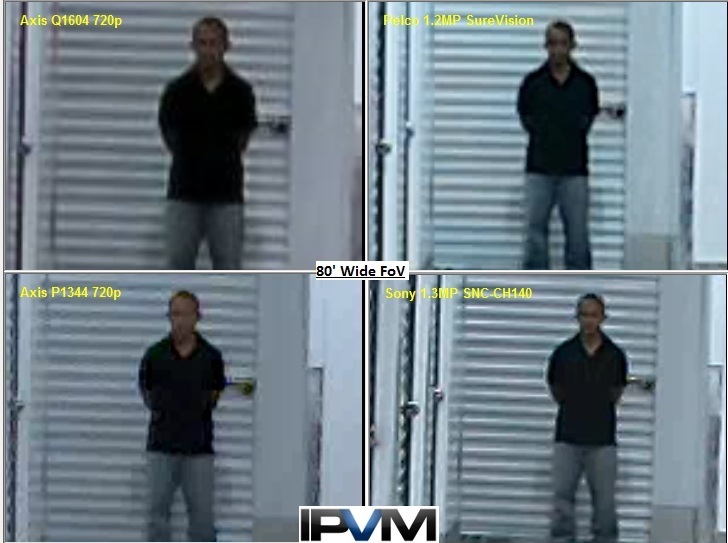 Now, our comparison moves to a narrow 40 foot wide FoV. Here, the Sony may have a slight edge in delivering details. 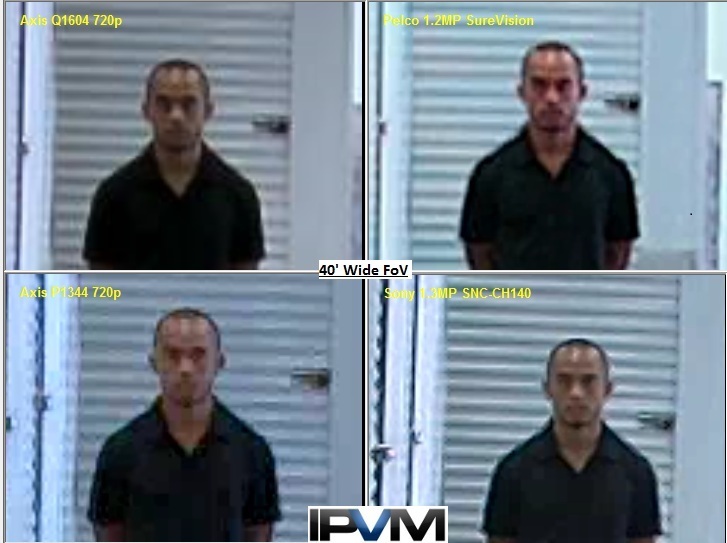 Overall, as to be expected, in daytime, evenly lit conditions, performance is relatively close.

Beyond the general improvements in WDR and low light, the Q1604 had one other interesting advantage over the P1344 - 'truer' colors resulting in lower bandwidth. In our daytime, indoor shots, at the same resolution and frame rate, the Q1604's bandwidth consumption was 30-50% lower than the P1344. Part of that is due to using main profile vs baseline. However, even when we forced the Q1604 to use baseline, significant bandwidth benefits remained.

As the comparison below shows, the P1344 routinely generates strange coloration / artifacts that do not occur in the Q1604. This very simple scene shows this:

Our theory is that this makes it harder for the P1344 to encode while making a less 'true' image.

This second comparison shows this in a real world scene. Look at how the crosswalk renders - the lines displayed on the P1344 are blurry/jagged while the Q1604's lines are more solid. Additionally, the facial details captured on the Q1604 are superior (which we would attribute to the WDR capability).

However, in the second comparison, if you turn off WDR for the Q1604 and set both at 1/30s exposure, image details are a lot closer with a slight edge to the Q1602.

However, in color mode, even with WDR off, the Q1602 is notably superior. However, for such a low light level (0.2 lux) and a megapixel camera, the Q1604 remains solid.

However, during the day, the megapixel Q1604 captures clearly more details than the extended VGA Q1602: