Axis says its new Q1602 camera with 'Lightfinder' technology is a 'revolutionary improvement' for video surveillance cameras. It is a very bold claim. Until now, the only thing available has been Axis produced demos so we bought an Axis Q1602 and did our own tests.

No doubt, low light is a historical problem for video surveillance cameras. While manufacturers make crazy claims of cameras working at 0.01 lux or lower, the reality is that the video quality is fairly terrible at light levels even 10x or 100x greater than those levels. Grainy, dark images are common in low light. 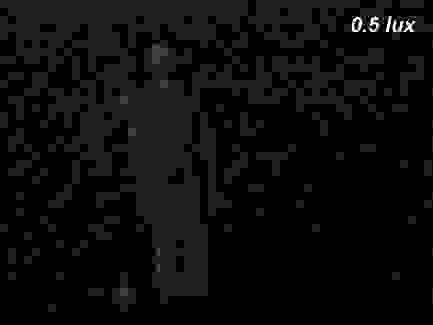 You can make out that there is a person but not much else. Pretty useless.

This is the type of video one is often stuck with unless they use digital slow shutters or illuminators - both of which have bad side effects, respectively motion blur and poor depth of field.

As such, getting a camera that has strong low light sensitivity without tricks or add ons is quite valuable.

We took the Axis Q1602 and pitted it against the top two low light performing megapixel cameras from our Megapixel Camera Low Light Shootout and a top regarded SD low light camera. In this way, we could better understand if the Q1602 really was superior to top quality products or was simply marketing fluff.

Then we did a series of tests:

With this approach, we could determine not only what was 'best' in low light but what tradeoffs existed during the rest of the day.

When looking at the Q1602 as a whole and trying to determine what, if any, fit the camera has, a number of important questions should be answered:

Inside, we answer all of these questions.

We did the test with the 5.40.3 firmware. UPDATE: On December 21st, a service release, 5.40.3.1 was released. Axis reports that this would further improve image quality in low light conditions. As this was released after the test, we have not used it. Low light image quality was already a strong competitive strength of the camera.

The big challenge with the Q1602 is that it's great at one really important thing (low light) and mediocre to bad at two other ones (day time and WDR). Plus, it is fairly expensive at ~$1,000 USD. As such, one needs to be careful about when to use it.

You first really need to consider what is most important - night time or day/WDR. If it is day/WDR, it is hard to justify using this camera. Also, if at night, you have 3 lux or more in your scene, the Q1602 will not provide much practical benefit.

That said, the best fit is for cameras where low light is key - perimeters and secure areas where night time intrusion monitoring is the key driver of camera selection. In such applications, the Q1602 is a lower cost, less complex, higher quality alternative to using IR illuminators. The Q1602 provides color at night and great depth of field - two things that are impossible with IR illuminators.

No configuration needs to be done to optimize low light performance. It works out of the box. There is a new Low Light configuration section in the Camera Settings page that has a modified control for LightFinder. See the red box in the image below: 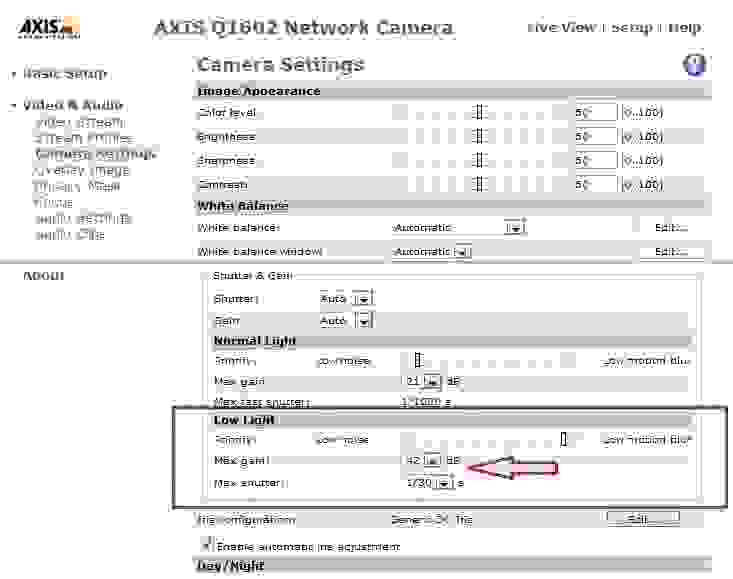 It is defaulted to the max gain possible (42 dB) and a 'normal' shutter speed. Given the camera's strong low light performance, it is unlikely that you will need to use a slower shutter. You could conceivably set the max gain lower than 42 dB. However, we do not recommend it as that would reduce the low light performance and would not really provide meaningful advantages.

Finally, be careful when trying to specify the camera using its max gain. Most cameras we test have a max gain in the mid 30s (including Axis's other lines). However, comparing one camera's max gain versus another is meaningless. The numbers are simply not comparable. That said, we expect to see consultant's specify the max gain of this camera as a way to ensure its selection. On the other hand, it would not be hard for other manufacturers to add an option for 42dB gain to match this regardless of whether they could actually match low light performance.

We start our tests with an indoors 0.3 lux color mode comparison. Even in the overview you can see that the Axis Q1602 is a step ahead of the next best low light performer, the Bosch NBN-498 SD camera.

By digitally zooming in the face, the difference in performance becomes even sharper. While the Bosch SD provides an outline of facial features, the image is nowhere near as sharp and detailed as the Axis Q1602.

Now we turn to a reference chart (from Vlado) that our subject is holding. The difference in results are similar. Also note how desaturated all the MP cameras except for SureVision.

Now, let's switch over to black and white mode still in 0.3 lux conditions. Here the Axis Q1602 is still brighter and more detailed than the others. However, while darker, the Bosch Dinion 1080p does show quite a lot of details. 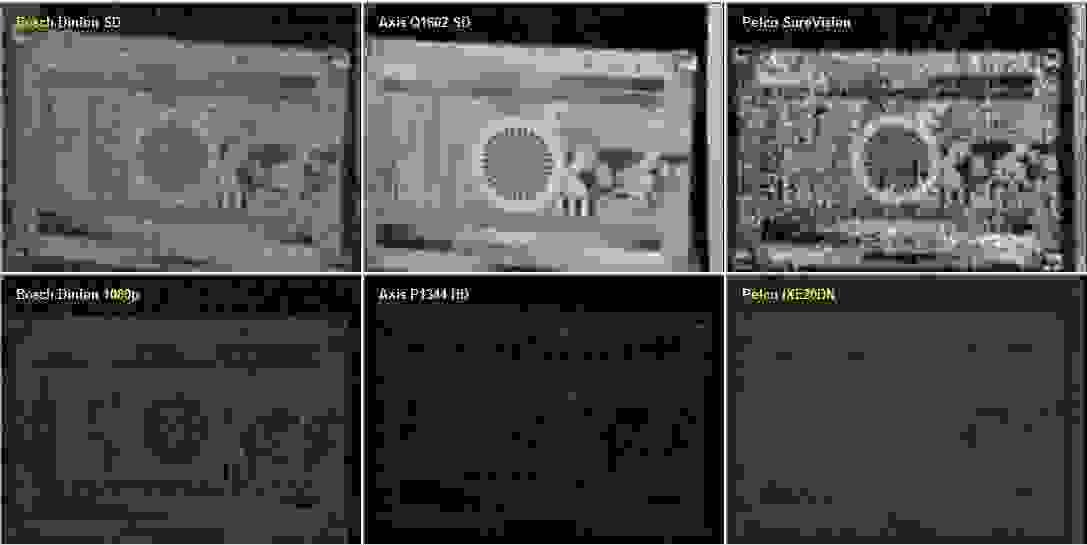 Now, we switch to zooming into facial details. While the Axis is still superior, the gap between the cameras has narrowed noticeably. The Bosch SD camera now provides a lot of details (though with greater noise) and all the megapixel cameras are clearly better than in color mode (though still far worse than either SD camera).

One thing that megapixel camera manufacturers (including Axis) commonly do is use slow shutter speeds. A manufacturer might argue that slow shutter is good enough to get acceptable low light while retaining the benefits of megapixel during the day.

In these comparisons, we held the Axis Q1602 constant at 1/30s while lengthening the shutter speed for the megapixel cameras to 1/12s - an increase of ~150%. We felt 1/12s was aggressive but feasible. Alternatively you could really get aggressive - 1/2s, 1s, etc. However, 1/12s is a good balance between getting more light and not having huge motion blur even with moderately moving objects.

The first comparison image below shows an overview of the scene. Clearly, the difference in brightness/details is much lower with the slower shutters on the megapixel cameras.

Now, let's zoom in to out subject's face to see what this means in terms of details captured. The Bosch Dinion 1080p looks better now showing more details with a modest increase of noise relative to the Axis Q1602. However, the other megapixel cameras, even with the much slower shutter still do not match the details of the Q1602.

As always, be careful of slow shutter modes. In particular here, for most MP cameras, slow shutter is likely not going to be enough to offset the increased details that the Q1602 delivers.

We also tested outdoors in a field. This scene is moderately brighter with an ~0.5 lux level. Let's start with an overview of the subjects in the near field in color mode. The Q1602 is clearly better than the rest but the Bosch SD is somewhat close.

Here's the same shot digitally zooming into the subject's head and shoulders. The Q1602 shows solid amounts of facial details significantly beyond the others.

Now, let's switch to our subject in the far field of view. He's the small object in the back center. Again, the Q1602 provides the clearest image with the Bosch SD next.

Now, let's digitally zoom into the subject who is about 100 feet away from the camera in an ~100 foot wide FoV. This is the most impressive contrast we saw in the entire test. While the Q1602 makes out the subject's black shirt and blue color jeans, the other cameras barely capture an outline of the image.

Switching over to black and white mode, the gap in performance drops significantly. Counterintuitively the Axis Q1602 delivers less details in black and white than it does in color. The Pelco SureVision arguably provides the best image though it too is still a blob.

Lastly, let's return to the near field of view with our subject close to the camera in black and white mode. At this shorter range, the gap in performance has shrunk significantly. All the cameras are fairly close (except for the Pelco IXE20DN).

Now we turn to day time performance to see how the cameras compare in well light conditions. Here we are trying to understand how much of a drop in performance does the Q1602 camera have versus the MP cameras.

First we start with a relatively narrow ~15 foot wide FoV. In the comparison below, all the cameras provide significant facial and identification details though you can see that the Axis Q1602 is not as sharp as the MP cameras. 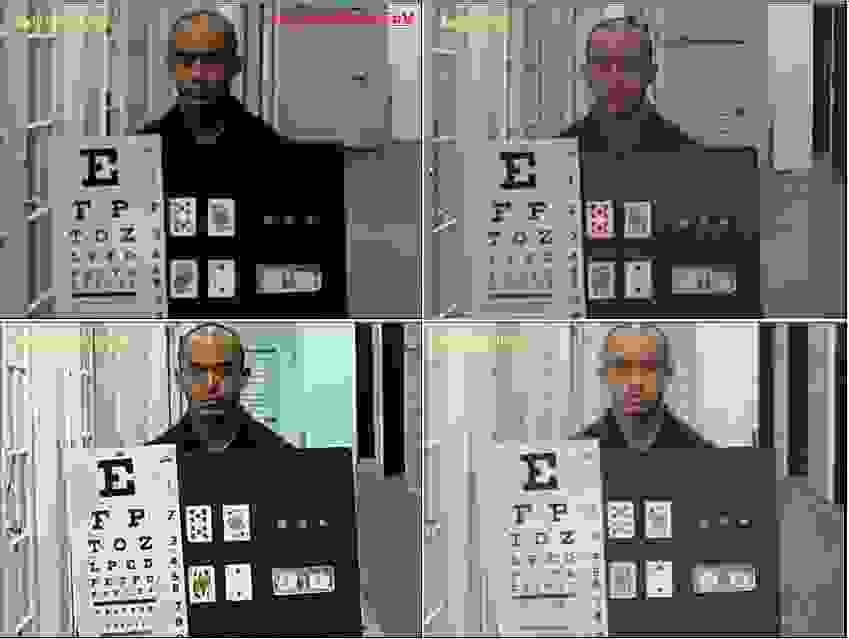 Now, we switch to a larger field of view with our subject moving back. While the MP cameras still show facial details fairly clearly, the Q1602 is not capturing fine details (as to be expected at roughly 30ppf) 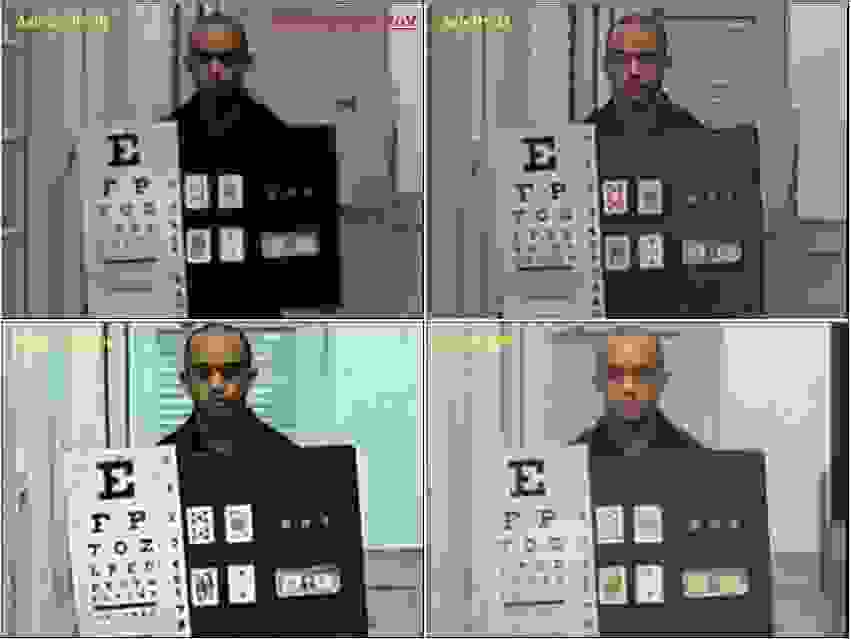 At ~40 feet wide FoV, the Q1602 no longer captures meaningful details of the subject's face nor much of the chart except for the top 2 rows. By contrast, the MP cameras, especially Pelco and Bosch are still quite detailed. 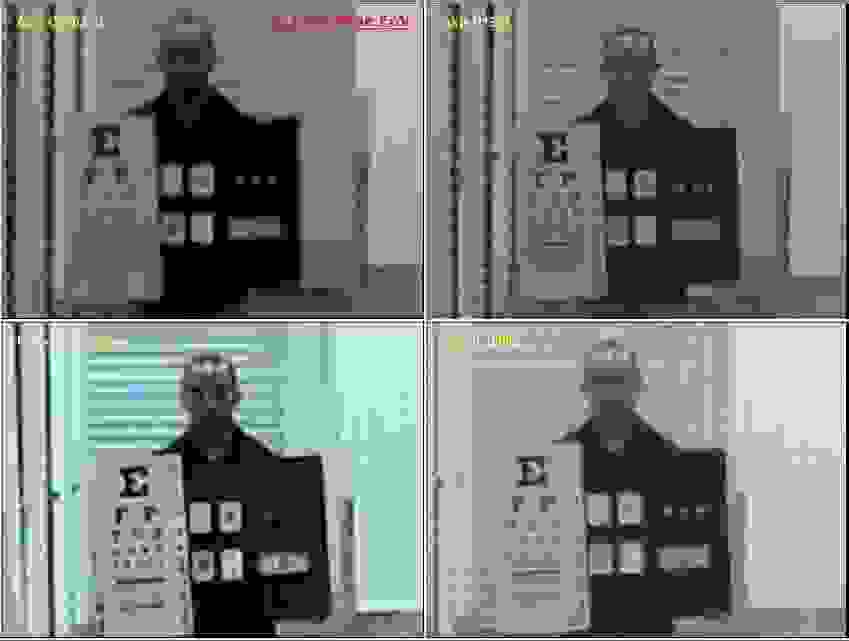 At a wider 60 feet FoV, the relative differences are similar. The MP cameras still capture a fair amount of detail while the Q1602 hardly shows any. 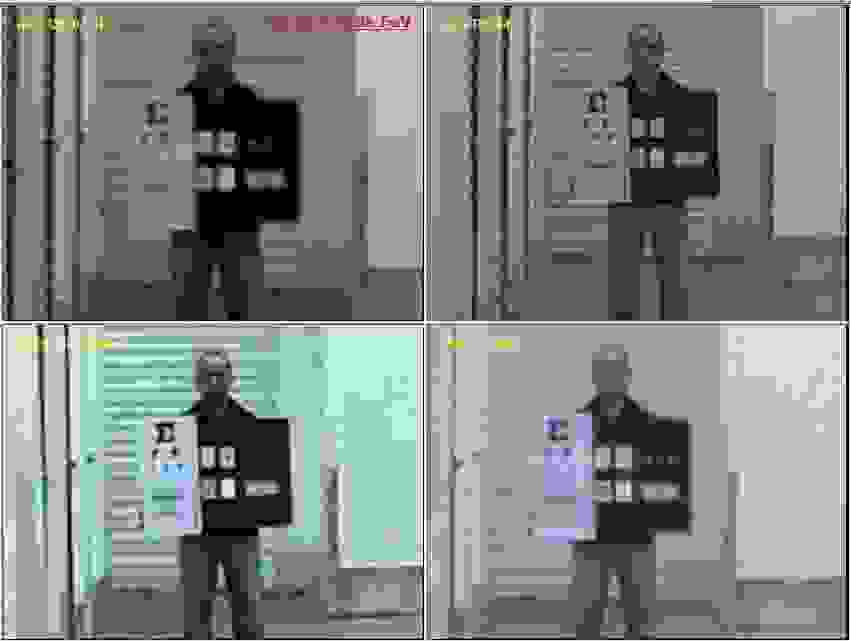 Finally, at an 80 foot wide FoV, the MP cameras still show some fine details while the Axis Q1602 captures mostly an outline of our subject. 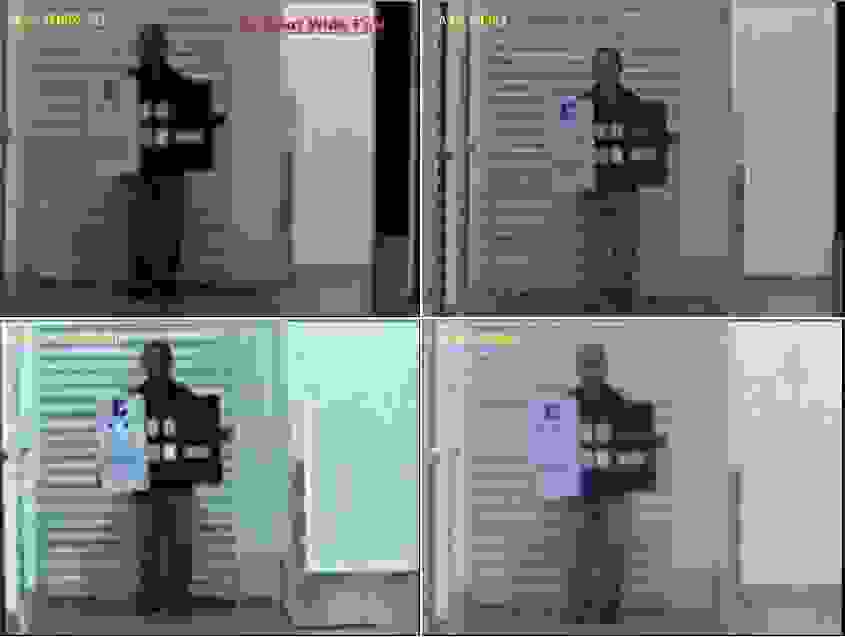 In our last image analysis section, we contrast Wide Dynamic Range Performance. We categorize this as a moderately hard WDR scene with variations in light level of about 3x from the near field (darker) to the far field outdoors (brighter).

The first comparison is in the near field / darker area. The Axis Q1602 is clearly the worst with the Axis P1344 second worse.

Now, we move to the middle of the scene. The Q1602 again is the worst of all cameras.

Finally, here is a comparison of our subject in the far field of view out in the parking lot. While most of the MP cameras capture facial details and at least part of the license plate number, the Q1602 does neither and is by far the worst performer in this scene.

The most interesting aspect of the Q1602's bandwidth consumption was how low it was in low light. Typically, Axis M and P series camera's bandwidth surges in low light reaching 5Mb/s, 10Mb/s or even 15Mb/s. You can see it on the video display that the cause is high levels of visible noise.

The Q1602 is the first Axis camera to support H.264 Main and Baseline profile. All existing support Baseline only. Our tests showed that Main had moderate bandwidth savings over Baseline but the key bandwidth reduction driver was the reduced visible noise.

Axis ARTPEC-7 Chip Release Examined on Apr 08, 2019
For years, Axis essentially de-promoted their own chips. Now, they are...
The Siliconization of Surveillance Cameras on Oct 29, 2015
This is an insightful observation from Vicon's CEO Eric Fullerton [link no...
Axis New Generation P33 Domes (P3363/P3364) on Mar 27, 2012
Axis has released a new generaton of their P33 dome camera line,...
Top 5 Disruptive Surveillance Companies 2012 on Dec 15, 2011
What companies are driving changes in the video surveillance industry? What...
Comments : Subscribers only. Login. or Join.