One of the biggest risks when deploying PTZs is having them pointed in the wrong direction when bad events occur. Axis and Optex have partnered on an integration claiming to prevent that from happening. Optex has announced an ACAP module that directly connects motion sensors to Axis PTZs and will automatically reposition the camera and prevent missed action. What equipment is required and how much does it cost? We take a closer look in this note.

Optex's RPG-AXIS1 plug-in allows IP-based detection sensors to send commands directly to an Axis PTZ. The 'power feature' this facilitates is a camera that dynamically moves and zooms based on alarm outputs from the sensor. Other commands are supported, like triggering the camera to record, or trip output contacts that turn on lights, alarms, or send alerts.

The image below shows an example of how multiple laser 'RedScan' or even traditional IR based Optex IP motion sensors can be joined to an Axis PTZ:

For more detail on Optex's RedScan, see our update on the sensor. In addition to RedScan, the new ACAP is designed to work with any Optex sensor able to connected to the PIE-1 [link no longer available], the company's ethernet interface module [link no longer available] for perimeter intrusion detectors. The detection coverage range for those sensors vary up to 350 feet, but regardless of the detection range, the exact location of movement is outputted to the camera and queues it to that spot.

Simple Integration: The biggest advantage of the ACAP is the efficiency of a direct integration. Instead of relying on a (supported) VMS to knit together sensor and camera movements, the sensor is able to directly communicate with the PTZ. This can simplify the integration challenge of getting three separate entities all working together, to a single integrated communication. The image below shows the integration method this ACAP employs: 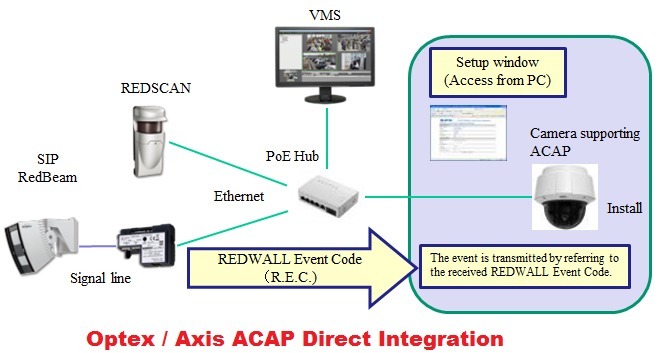 No VMS Support Needed: Using an ACAP eliminates the need for a VMS to act as intermediary. In the past, this level of integration only worked with Exacq, Genetec, and Milestone VMS, a deal breaker for users on different platforms. With the ACAP, the resulting integration is useful in any VMS supporting Axis PTZs - one of the most widely supported camera brands.However, unlike VMS integration, using the ACAP method is only available on Axis cameras.

Free: There is no cost of downloading and applying the ACAP. However, Optex requires product training (also no cost) first before granting access to the plug-in.

Optex internal tests show no performance or notable speed enhancement for the ACAP method. They told us "Optex tested the connectivity and compared speed performance with Exacq, Milestone and Genetec.  Results concluded there is almost no difference in speed. The test we conducted was only one detector to one camera to VMS."
Actual performance may differ depending on the number of sensors, cameras, and type of network connecting them. We have not tested these claims and cannot verify the result.

This integration only applies to specific Axis camera and Optex devices:

Optex: Sensor support is limited to the Redscan Laser Detector, Redwall PIR, and Redbeam Photobeam sensors [link no longer available] connected to the PIE-1 encoder. This family of sensors generally fit outdoor, perimeter building or fenceline intrusion detection. Pricing ranges from ~$400 for the basic PIR, up to ~$3000 for the laser detectors.

As a result, the potential applications for this are held back by major constraints:

Overall Cost: While the plug-in is free, the devices it integrates are not inexpensive in either case. The cost for this solution is likely no less than $3000, and may be $6000+ depending on number of sensors and model of camera. For example:

Has a total hardware cost of ~$6500, less cabling, switches, mounting hardware, and labor costs. This will likely limit use to large commercial, government, high-security, and critical infrastructure applications.

Axis PTZs Only: Perhaps the most constraining limitation is the fact it only is useful on Axis PTZs. If other brands of camera are specified, this ACAP will be no use at all.

However, despite the high cost, the convenience of a 'off-the-shelf' integration for perimeter security applications could elevate both Axis and Optex up the list of options, especially during new work specification writing.

In addition, the perceived integration difficulty drops, due to the manufacturers having condensed configuration to a camera plug-in, rather that complex serial integration or manual configuration of input/output contacts.