Today, Axis' PRC China sales are tiny, but for years Axis considered the PRC the "market with the greatest potential" due to its strong growth and supplied many high-profile PRC enterprise projects, including police.

This all ended in the mid-2010s when the PRC excluded foreign products from government projects while launching massive video surveillance spending campaigns, boosting the rise of Chinese manufacturers like Hikvision and Dahua.

Axis confirmed its PRC struggles to IPVM, stating it is now "practically never invited to bid in government funded projects" and instead is now focused on "international companies that have presence in China."

In this post, IPVM examines Axis PRC's rise and fall.

In 1996, Axis started in China with a Shanghai office. Axis added a Beijing office/Axis Experience Center in 2008, with CEO Ray Mauritsson in attendance for the opening: 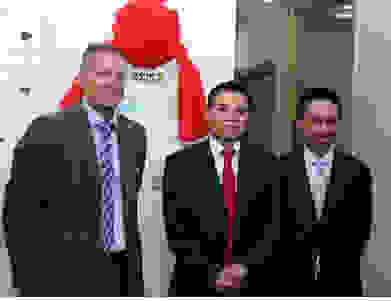 Axis saw early potential in the PRC, stating in 2002 that while the PRC's IP market was "in its infancy" security demand was "growing rapidly". Axis aimed to capitalize on the shift to IP from analog with Mauritsson saying in 2010 that "approximately 95 per cent of sales in China are of analogue systems. Only a small minority are network video solutions".

In 2011 Axis brought in former Pelco Asia exec Dr Jiang Hongtao as its China director to oversee PRC expansion, with Axis touting the PRC market numerous times over the years:

In 2014, Mauritsson bragged to PRC state media that Axis China recorded over 40% growth every year since 2009 and now had 1,500 partners. This growth was in contrast to Axis' actual financial performance in 2014, see IPVM's Axis In Denial, Q3 2014 Financial Report Bad:

Asia only delivered 11% growth in local currency terms, which is especially bad given Axis low market share there and high overall growth rates.

Overall Mauritsson was often bullish on the PRC, calling it "the market with the greatest potential for Axis" in 2010 and traveling there in 2014 "celebrate Axis' 30th birthday with the Chinese team". Mauritsson also called China a "very exciting market for us" with "huge untapped potential" in 2010 and noted "growth is very strong in China" in 2011. 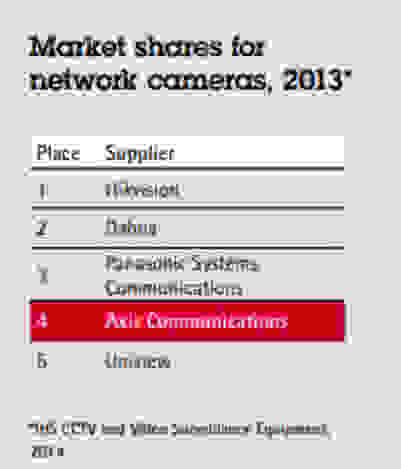 In its 2014 annual report, Axis touted it was #4 in the "Asia" region (see right) and said Axis "has a relatively low market share in China compared to other markets" but "the sales trend is strong and there is good potential for continued growth and expansion".

Axis never disclosed what portion of its sales were from the PRC. However, its "Asia" region (which excludes the Middle East) peaked at 13% of sales in 2014, with Axis telling IPVM that, currently, APAC sales are 11% of total revenue.

This is despite the fact that the PRC alone is currently about 50% of the total, global, video surveillance market.

In 2010, Axis also touted a deal with Xiamen police to build a Command Center including "over 100 HDTV cameras": 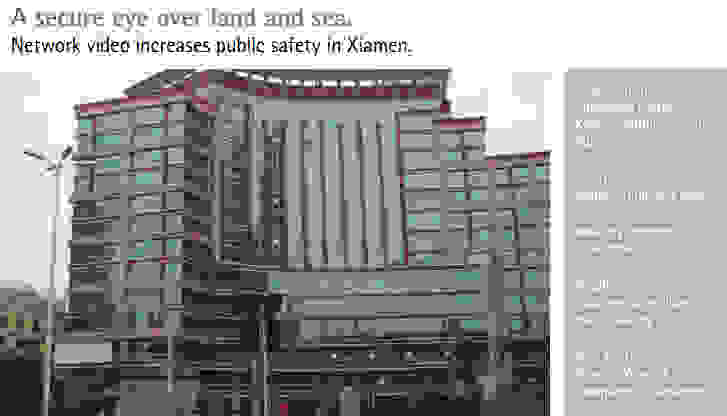 In 2009, Wang Jian, the Party Secretary of the Ministry of Public Security's Technology Bureau, held a meeting where he publicly thanked foreign surveillance companies, including Axis (which was present) for helping "bring good ideas and practices to China" in order to build "China's harmonious society" and improve "social management": 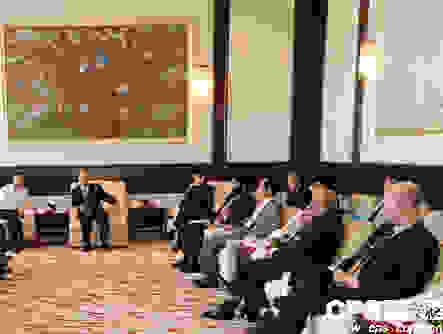 In 2009 as now, an important part of PRC police's "social management" was cracking down on any opposition to the Communist Party's official leadership of the country, e.g. the 2008 jailing of Liu Xiaobo for signing a pro-democracy charter and the arrest of over 1,000 Tibetans during unrest in 2008.

Axis still continued to supply large police and other government deals, but this changed definitively in 2015, when PRC state media announced that "China is set to drop government purchases of foreign technology products as part of the national strategy to ensure information safety": 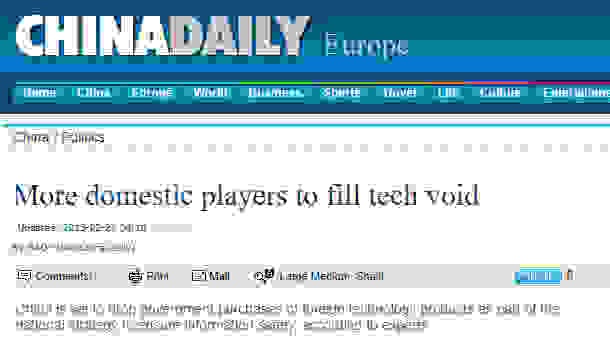 China reported that Miao Wei, Minister of Industry and Information Technology, "said Chinese-developed IT products are critical to improving information security." Reuters reported a month later that "in 2012 [Cisco] counted 60 products on the Central Government Procurement Center’s (CGPC) list, but had none left by late 2014". State media said this move was "because of security concerns and to support local IT enterprises".

This came after various moves to restrict foreign products in government IT networks, e.g. its exclusion of foreign antivirus providers in 2014 and a prohibition on Apple phones (also 2014).

In 2015, CEO Mauritsson stated that China is "a more challenging market being more protected". Also in 2015, Axis blamed China for a 9% Asia region sales decrease "as a result of intense competition from local players", adding "the Chinese market is characterized by intense competition and high price sensitivity":

Asia decreased by 9 percent. The trend in Asia was mainly due to decreased sales in China as a result of intense competition from local players

The Chinese market is continuing to show strong growth and is now the largest global market for network video. Axis is investing to increase its presence through local personnel and a stronger partner network. The Chinese market is characterized by intense competition and high price sensitivity. Axis’ business is currently focused on larger and complex projects, where the overall quality and service offering is of great importance. The local development centre in Shanghai is working on continued releases of products and solutions that meet local norms and standards [emphasis added]

In Q4 2015, Axis noted "A weak development, especially in China, has had a major impact on sales." Government sales are critical for the PRC video surveillance market with CPS estimating in 2018 that about 60% of the market was "government-led".

Axis Reliant On Partners But Hikvision And Dahua Bid Direct

Both Hikvision and Dahua often bid direct for PRC government projects (e.g. over $1 billion for Xinjiang police alone), booking large margins, while Axis used local partners. In 2014, Axis' China director Jiang Hongtao was interviewed and stated Axis needed to "take the initiative" to sell direct to SIs and end users, "otherwise we will be eliminated": 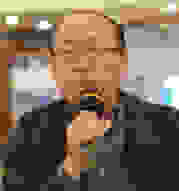 Of course, starting in 2015, Axis going direct to SIs and end users was impossible due to the government crackdown, and Jiang's prediction became reality.

Also in 2015, the PRC government launched its massive "Sharp Eyes" projects to achieve "100%" video surveillance coverage with "no blind spots" by 2020. Thanks to the foreign procurement ban, Hikvision, Dahua, and others were well-positioned to benefit. In 2018, a Dahua executive estimated Sharp Eyes would bring over $15 billion USD worth of investments to the PRC China surveillance industry.

Today, Axis told IPVM its PRC branch is "practically never invited to bid in publicly funded projects" and is instead focusing on "international, private companies":

Axis is nowadays practically never invited to bid in publicly funded projects. As a consequence, our sales efforts concerning China instead have focus on international, private companies.

Indeed, Axis has not touted any China case studies since 2015. Axis China's website currently is under maintenance and its Chinese WeChat (social media) presence is limited to translated marketing material rather than anything China-specific.

Axis did hold a 2020 Axis China Solution conference, however, Dr. Jiang Hongtao was unmentioned, making it possible he has left. Axis declined to comment on personnel changes but said it currently has a "North Asia" director but no China director.

To give context about how massive the PRC market has become, Axis's annual revenue is ~$1.5 billion, which is quite high for this market relative to the non-PRC world. However, Hikvision's revenue, just inside China, is 4 times Axis global revenue at $6+ billion annually.

Charles has one more upcoming report in this series, investigating in more detail how the PRC market blocked out foreign video surveillance firms in the past decade. While people largely assume (correctly) this happened, Charles is putting together extensive citations from the PRC government directly to show how it was done and what reasons they gave.

It is interesting that as early as 2012 China believed that their using products from foreign manufacturers was a security risk, while following that decision the marketing and use of PRC funded manufacturers expanded in public projects in countries around the world has continued and is still expanding today.

Would their reasons or caution about foreign product being used in their country be any less valid for any other country in the world?

Consider the expansion of PRC network chipset sales and the growing increase of their use and application in video, security, medical, communication, and IOT products by manufacturers throughout the world.

When combined with PRC subsidization allowing a potentially lower than cost market sales price, they have captured a huge market share over the last 7 years.

The utilization if those chipsets in all network products, as well as network based security related products should be of great concern to all governments, manufacturers and consumers globally.

In fact, the PRC have advised against such use in their own country for over 11 years.