Low-light and WDR capability are perhaps the two most sought-after features in surveillance, but usually cameras are made to handle only one or the other well, not both. Now, Axis has announced the latest in their P33 series domes, the P3384, featuring both WDR and Lightfinder low-light capability. In this note, we look at the features of these cameras, their potential impact, and how they compare to other WDR and low-light models from Sony, Pelco, and Panasonic.

The P3384 adds Lightfinder low-light capability, as well as wide dynamic range support to the existing feature set of the P33 series: 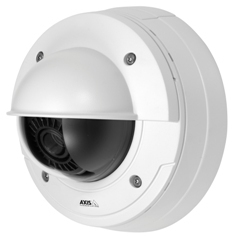 The key differentiator of the P3384 is its combination of strong WDR and low light capability in the same camera. As our tests of Axis' Q1602 (with Lightfinder) and Q1604 (WDR) cameras have shown, these two technologies are some of the strongest in the industry.

The current Axis P3364-V, which features Lightfinder, but not WDR, sells for about $800 online, a $100-150 premium for WDR. Users should be aware of this, as WDR may not be necessary in many areas, and this increase (12-18%) will add up across multiple cameras.

Based on these pricing comparisons, Axis' P3384 models are likely to be solid competitors. With WDR and low-light conditions being some of the most challenging conditions in surveillance, combining the two at a price competitive with other models will make the P3384 attractive.

This culminates a very important shift over the last year for Axis that has major implications for the market. Until a year ago, Axis's overall image quality was fairly mediocre competitively - not particularly bad but not outstanding compared to rivals. Since then, introducing Lightfinder and WDR plus its expansion to box and dome cameras has given Axis another important edge. This will certainly put pressure on rivals to match those enhancements and specifically on Panasonic and Sony who historically centered their positioning on better image quality (which they do not have today against Axis). That said, given the ongoing progress in sensor development, we expect significant improvements from rivals over the next year.

On the image quality side, the most notable limitation is Axis's focus on 720p image enhanced cameras (i.e., no Axis WDR over 720p, only Lightfinder on one 720p+ camera - the 5MP dome). We would expect competitors to emphasize comparably positioned cameras at 1080p. Ultimately, testing will show the tradeoffs but this will certainly be an important aspect to consider.