For years, Axis has had the Dynacolor OEMed T8414 installation display but it has received mixed reviews.

Now, they are releaseing their next-generation install tool, with a different approach, the T8415.

In this note, we look at the features, pricing and tradeoffs of using this tool vs Veracity and other installation tools.

It includes a swappable battery, ports for PoE out (to the camera), network in (to a laptop or LAN), and most importantly an integrated wireless router. The T8415 comes with Android and iOS apps that allow a tech to connect to an Axis camera and aim and focus it using a smartphone, tablet, etc.

Here is the Axis demo video:

Many of you may be saying, "Hey that looks just like the Veracity Pointsource."

The T8415 is essentially the next generation of the Pointsource, with Axis confirming that this is done in partnership with Veracity.

Axis noted the following enhancements compared to the traditional Pointsource:

Veracity tells us that they are launching their own version of the next-generation Pointsource at IFSEC in June.

Relative to the existing Pointsource, the T8415 costs three times the price (200% more) with the main benefit that techs can use a smartphone instead of their laptop, which is generally easier to hold, especially when on ladders.

There are two key competitors to the T8415:

Everfocus offers a tool similar to the T8415 which they call the Sidekick [link no longer available] (~$225 online), essentially a small wireless router and PoE injector with battery. Like the T8415, users connect it to their camera and then connect via mobile device or laptop. The Sidekick is notably less expensive than the T8415, but lacks the swappable batteries and second Ethernet port of the T8415.

There are several installation tools made specifically for IP surveillance, including the Axis T8414/Razberi IT-5000 (both ~$600 online) and the Tatung TOM-0431 (~$800 online). These tools include a built in display used to aim and focus the camera and access the web interface to change settings, as well as a battery used to provide PoE power. 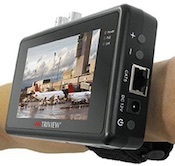 Specialized tools provide display and power all in one unit, simpler than carrying a Pointsource or T8415 in addition to a tablet or laptop. However, many techs argue that the built-in displays are too small to properly focus multi-megapixel cameras, and web access to configuration options is limited, both arguments which Axis claims to address using their dedicated Android/iOS app.

Testing IP Camera Test Monitor (Tatung) on May 06, 2015
Integrators frequently cited insufficient installation tools as one of the...
Comments (4) : Members only. Login. or Join.