Axis failed to meet their own expectations, surprised by a poor end of Q1 2014, causing profits to drop notably and raising questions about why Axis missed.

In this note, we examine the financial details, Axis investor's call, and the competitive forces pressuring Axis.

The 'good' news for Axis is that revenue growth continued at the mediocre 15% common in 2013. However, the bad news is that Axis expected to have growth in the 20-25% range, so much that they continued to increase expenses at that rate.

As a large, mature, publicly traded company, the market expects Axis to generate significant profits. Axis will have to rebound its profit margins or suffer further declines in its stock price.

Axis missed its numbers across the globe, with only a few bright spots. Here's their geography overview chart: 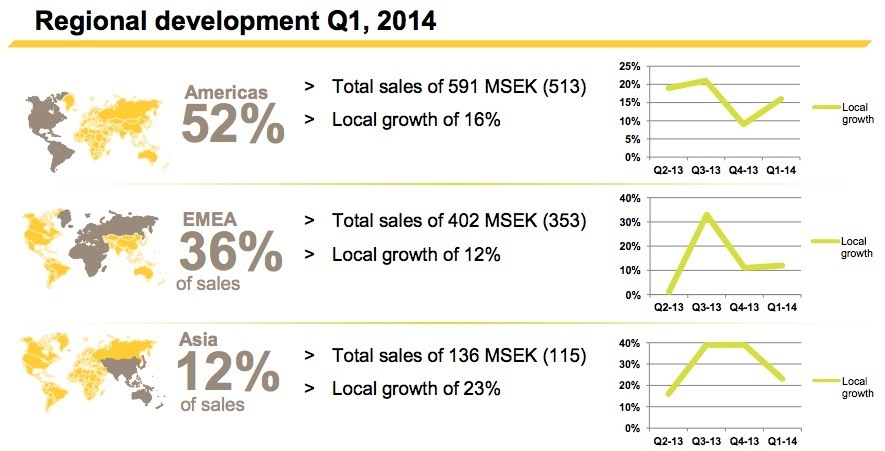 The Americas, in particular, were a problem. While growth was better than the terrible Q4 2013 results, on the investor's call, Axis acknowledged that Americas all came in below expectations and that the total region was 'far below'.

For Axis to get 20-25% growth, it needs strong performance from the Americas (25%+), because the region is the majority of Axis' overall sales, Europe's economic condition is poor and Asia, even at high growth levels, is too small for Axis to carry them.

On the call, Axis also acknowledged that their average selling price was declining, noting a 5 point difference in revenue than units, i.e., they need to sell more units to get the same revenue level than previously.

While the American surveillance market is not as hot as it once was, we believe Axis biggest challenge is increased competition from lower cost manufacturers. Specifically, Avigilon, Hikvision and Samsung are companies we see taking share from Axis.

Of the 3, Avigilon is the most expensive, but still typically less than Axis, and as Avigilon CEO rightfully boats, delivering much better margins to resellers. Additionally, both Hikvision and Samsung have significantly built up their American sales forces along with improved mid tier products at prices generally much lower than Axis.

At the same time, Axis product development has been overly focused on the mid to high end of the market (e.g., 10 new domes, 9 new PTZs, the Q1614, etc.). The consistent theme is more expensive, higher end products that bring incremental advances only.

We cannot see Axis getting consistent 20% growth, unless they counter these significant competitive moves. Worse, without rectifying this, it is quite feasible that Axis stops growing at all.