Two of the biggest names in IP video surveillance, Axis and Milestone, are entering the access control market. While both are open platforms designed to work with many 3rd parties, their simultaneous entry indicates a major effort for surveillance manufacturers to become stronger players in the complimentary access control space.

For Axis, their initial products are the A1001, a two door IP controller and Axis Entry Manager, serverless access control management software. Additionally, Axis controller offers an open API and integration with 6 third parties including both Genetec and Milestone. 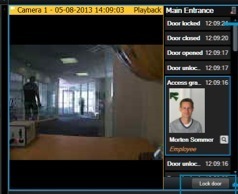 Separately, Milestone is introducing their Access Control Module, an add-on to their VMS software that enables integration with third party access control management software to deliver live monitoring, investigations and alerts of access and video combined. Milestone's first partner for this module will be Axis.

This represents a major shakeup for the glacial moving access control market, though it by no means guarantees success, especially considering how entrenched incumbent access control offerings are. However, this will generate fresh interest and debate into what access control to use.

Both Axis and Milestone are releasing credible access control offerings. However, neither is a technological breakthrough and are similar to existing products. Plus the access control market is notoriously slow to change.

That said, given how entrenched electronic access control incumbents are, with proprietary components and similar feature sets, we expect modest uptake of Axis and Milestone's offerings, over the short to mid term.

However, given how the surveillance market is maturing with the transition to IP cameras nearing completion in the Western professional markets, these moves show manufacturers looking for new growth areas. And while the expansion might be overall modest for them, we expect this to put more pressure on access control incumbents who are not used to dealing with hard charging competitors like Axis and Milestone.

Axis' A1001 controls two doors and features inputs for two readers and outputs for two locks. Alternatively, the unit can be configured for a single door with both 'in' and 'out' reader function. Along with two independent 'Lock Outputs' for controlling strikes, maglocks, or electrified hardware, the controller supports inputs for standard RTE devices like pushbuttons and PIRs.

The unit is PoE 802.3af powered, and passes through ~500mA for accessories like strikes and readers. Some types of locks (continuous duty strikes, maglocks) and readers (biometrics, scramble keypads) will require additional power supplies, but the A1001's pass-through power is on par with most PoE powered controllers.

The controller comes in its own enclosure (not a PCB or metal can mount) that measures roughly 7"x7"x2". Unlike some controller 'cards' that nest inside a metal panel enclosure, the A1001 stands alone. The enclosure is UL2043 listed [link no longer available], which allows it to be directly installed into plenum airspaces overhead of doors. 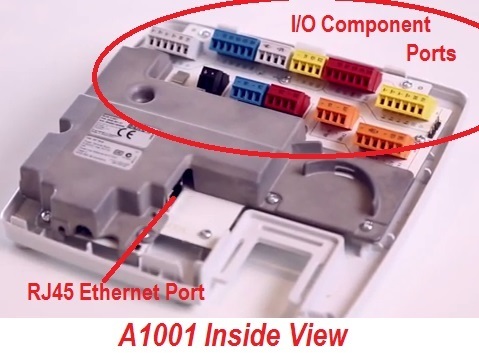 The A1001 may be used with its embedded / included software, called Axis Entry Manager, or integrated with 3rd Party systems.

The controller is a stand-alone unit that requires no 'head end', and can be 'paired' with other A1001s to a max of 33 controllers (66 doors). No centralized server is needed, because each controller associates itself with other controllers on the network.

An end user is able to use A1001s apart from a separate management software, via an onboard web interface named "Entry Manager". That interface supports a 'basic' access control system composed of <66 openings. When units are 'paired' together, a single controller propagates changes of credential holders, schedules, and access levels to all joined controllers on the network. A single controller point therefore is able to enroll users on all doors, systemwide.

When used with a '3rd Party' access control platform, the A1001 functions like an "open" controller, in the way HID Edge/VertX or Mercury EP1501/02 controllers are used. While the level of integration between the A1001 features like user management, activity logging, and exception reporting depends how deeply the 3rd Party platform ties into the hardware, Axis' standard API for network cameras has been expanded to include A1001 functions. Full support of A1001 features in multiple platforms is likely.

The controller supports a variety of readers via standard Weigand protocols, and works with encoded 'smart credentials, up to 128 bit encryptions. Multiple factors of authentication are supported in the stock 'Entry Manager" interface, for example, rules requiring both a contactless card and PIN number for entry.

If a reader is able to output in Weigand, it will work with A1001, meaning a full range of proximity, smart-class, pin numbers, and even biometric credentials are supported.

Similar to Axis onboard 'video server' in network cameras, a similar portal is built into the A1001. The management interface offers a basic set of user management and access scheduling features, similar to other systems like Honeywell's NetAXS [link no longer available], HID Edge Solo, or Brightblue. While lacking the deep configuration and reporting features of enterprise management platforms, the features most useful for small systems can be accesses by mouseclicks in Axis' standard 'tabbed' interface. The image below shows an example configuration screen in the "Entry Manager" interface: 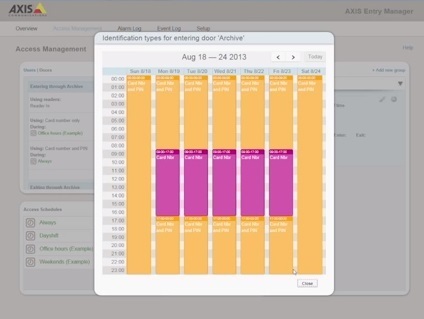 When ONVIF C is ratified, A1001 will be a compliant device, although that likely is still months away. In the meantime, Axis is positioning the controller for direct integration with several existing platform partners. At launch, Axis 3rd Party development partners for the A1001 include:

One aspect Axis pays particular attention to is that its 'video-centric' resellers might be unfamiliar with installing physical access control. Axis has built configuration and installation wizards into the A1001's interface.

The wizard asks for door configuration details: what type of readers, locks, and RTE hardware is required? From there, the wizard generates a printable, color-coded wiring diagram according to the specific orientation. An installer can then use this sheet as a reference when wiring the controller:

The A1001 draws immediate comparisons to two units in particular: HID's Edge EVO and Mercury Security's EP1501/2 controllers. Like those units, the A1001 is IP addressed, PoE Powered, and supports up to two readers per controller.

However, those units differ from the A1001 in notable ways, namely:

Axis' controller operates two doors, while HID's Edge EVO is limited to one. While EVO supports two readers, that unit supports configuration and lock output contacts for one lock. The EP1501 is available in a two-door variant, but is not useable in stock configuration without a 3rd-party management solution.

The MSRP price of the A1001 is $599, which places street pricing at ~$550. This places cost in the range of HID's Edge EVO controller with a street price of ~$425, although two doors can be controlled with the A1001 versus the Edge EVO's single door, which is a notable cost savings for Axis.

There is likely additional software licensing required when using the A1001 with 3rd party softwares. For example, purchasing controller hardware through software companies commonly waives the software license cost (eg: Buying HID Edge EVO controllers through Genetec waives the ~$175 Reader License fee in Security Center). When buying A1001s in the open market, one should expect to pay this license cost, since the software company makes no money reselling hardware.

The A1001 is slated for US only launch. Axis estimates the A1001 will be available from national distributors starting in Q4/2013. Worldwide rollout will follow in subsequent quarters.

Milestone's ACM is an add-on module to XProtect video management platforms. The module is installed and configured on the management server and is pushed to all Smart Client viewers. ACM does not replace native access control management software, and hardware configuration/user management functions still originate in separate access platforms. Rather, ACM uses a Milestone developed 'standard integration framework' to display the status of the access components and allow basic functions from the XProtect interface:

The actual commands available depends on the capabilities of the Access Control system, and the event server plug-in. Access Control is integrated into Smart Client at several key points, including a Live View "Flyout" Pane, a new "Access Control" interface tab, and an expanded "Alarm Manager" tab that displays access event. We detail each of those points below:

Fly Out Pane: The fly-out is an active, separate overlay that shows access alerts. The popup-like Flyout alerts operators to activity happening in real time on controlled doors. From this pane a variety of bi-directional functions and information logs are shown: 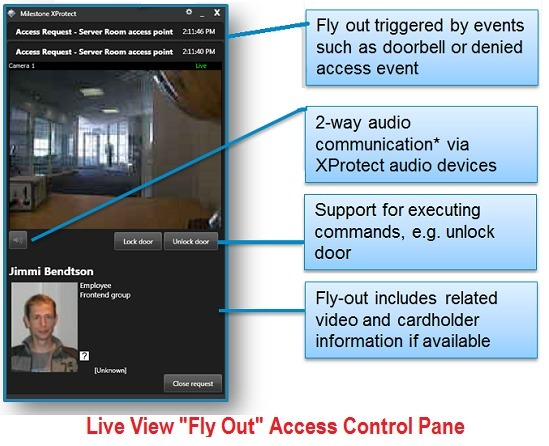 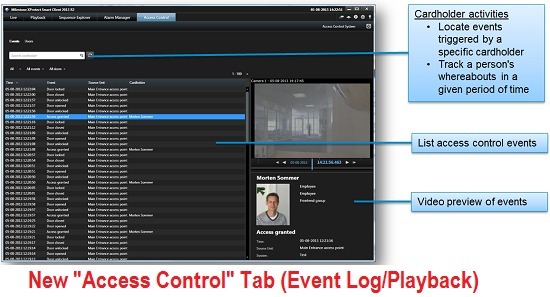 For example, all interactions using a certain credential can be searched, providing a 'video log' of whom and when that credential was used.

Maps/Alarm Manager: Likewise, the default "Alarm Manager" tab has been expanded to include access system events. Alarms can now be generated based on Access Control events.  Event integration with recorded video can be replayed from the tab, and the location/status of doors can be added into overview map views 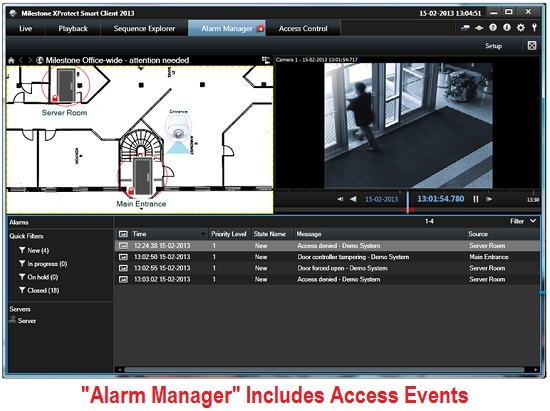 Access Control integration via Milestone's ACM requires the participation of access equipment partners. Axis is the first partner signed to use the framework.

The access control module is licensed at $79 MSRP per door, in quantities of two. Combined with Axis Entry Manager, which is free, the total software cost is fairly reasonable. However, in the future, with other 3rd party access control systems, that $79 would be in addition to the access control management software licensing costs.

Milestone will release ACM for 2013 versions of Xprotect Express, Professional, and Enterprise in October. The module will be made available for Expert and Corporate versions after 2014 versions are released.