Axis has brought 4MP to its camera line in the new M3046-V, the highest resolution model in their revamped M30 series. We bought and tested this new camera against 4MP models from Dahua and Hikvision to see how low light, full light, and WDR performance compares. 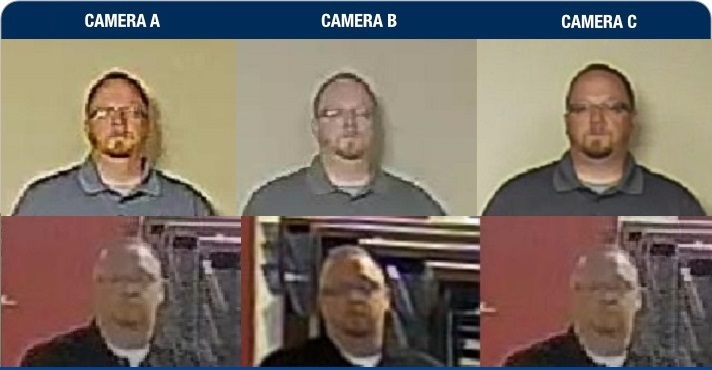 Inside, we see how it stacks up against these models, as well Axis' other new M30 cameras.

Though it marks one of the first 4 megapixel releases from a major western brand, the Axis M3046-V provides poor low light performance and only average WDR and bitrate performance in a camera much more expensive than available 4MP options, such as the Dahua and Hikvision cameras tested here.

Additionally, all 4MP cameras in this test experienced notable degradation in image quality in relatively well lit scenes (>100-150 lux) with significant noise and artifacting. Image quality improved greatly at ~300 lx and over.

For users seeking anything other than full light details, Axis' other new M30 models are better options, as both offer strong low light and WDR performance, at ~$100+ less than the M3046-V.

We first tested the M3046 against Dahua and Hikvision in a wide FOV, seen here: 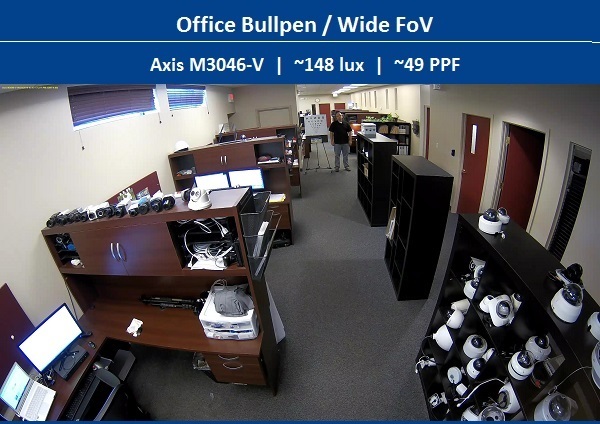 In this scene, the M3046 produces details of the subject roughly similar to the Dahua and Hikvision cameras, with all models showing significant pixelation. The test chart is more legible in the 4MP models, line 3/4 vs. 2/3 in the Axis M3046. 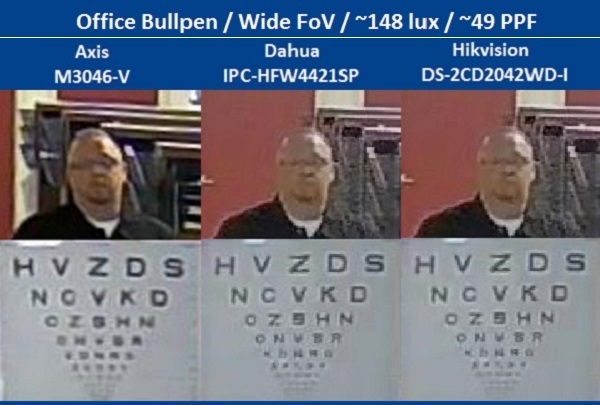 Next, we tested in a narrower FOV, seen here: 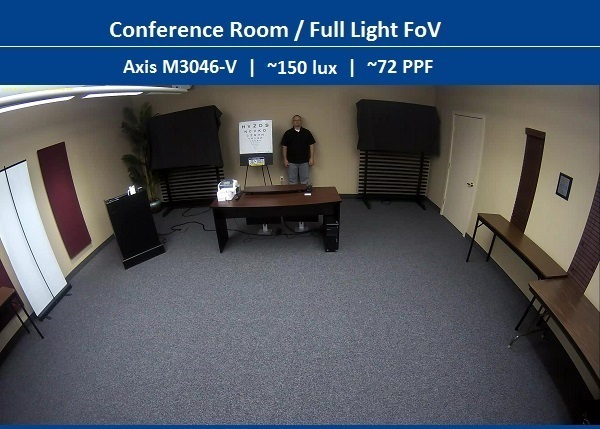 In this FOV, with PPF high, details of the subject are roughly similar in all cameras. However, fine text is more legible in the Dahua and Hikvision 4MP models. 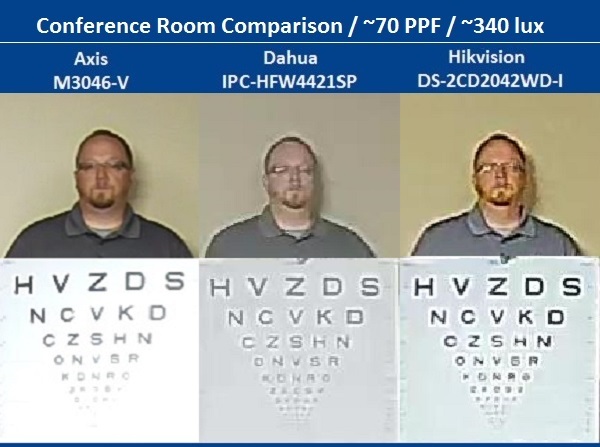 In our tests, the M3046 (and other cameras) performed poorly in our standard conference room scene, with a light level of about ~150lx. Images were dim, with noticeable noise and artifacting reducing details of the test subject. Adding more light to the room (up to ~340lx), images improved significantly, seen below. 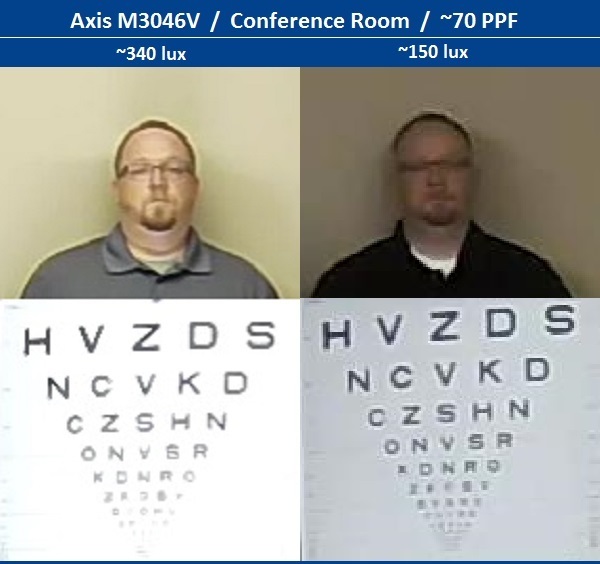 Low light performance of the M3046 was poor, with the subject and chart barely visible at ~0.1 lx. 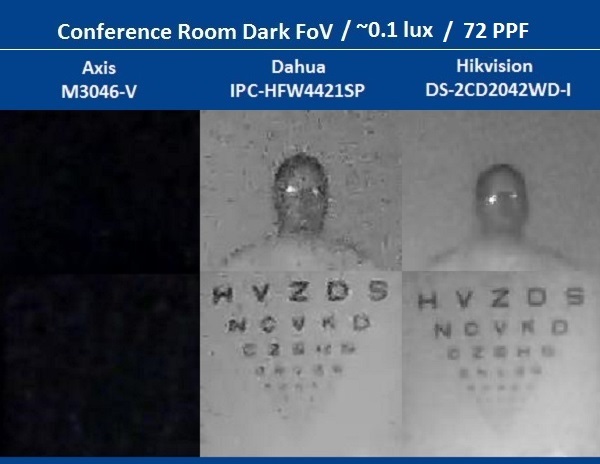 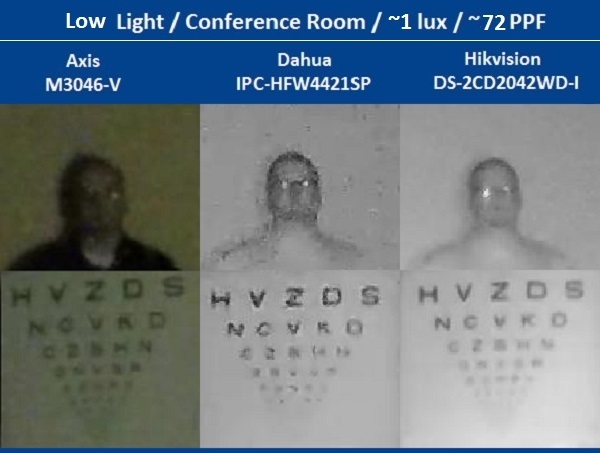 In full light, the M3046 displays much stronger details at the same target distance, despite its much wider AoV (128° vs. 102° or 82°) due to its higher resolution. 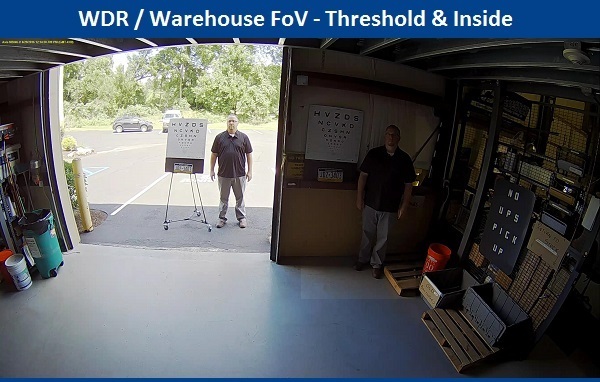 WDR performance of the M3046 was similar to the Dahua and Hikvision cameras in this scene against both strong backlight as well as the darker area of the scene. 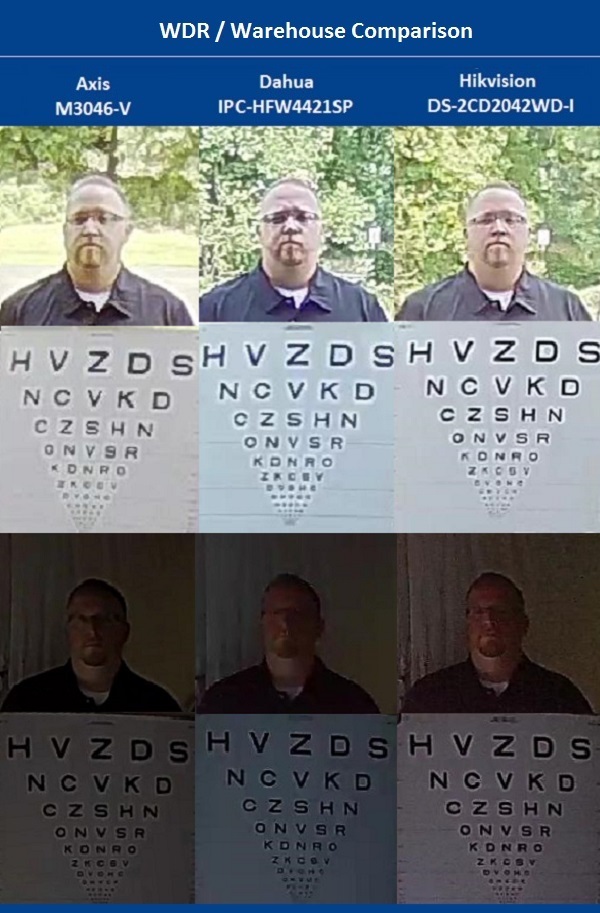 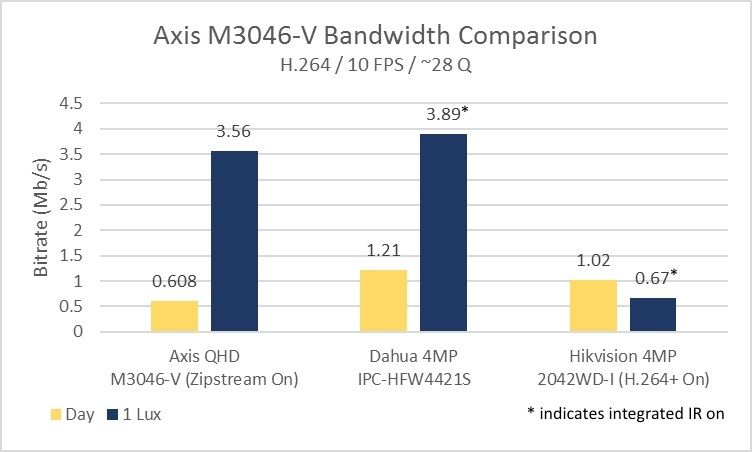 Note that these measurements were taken prior to Dahua releasing their Smart H.264+ codec (see our test). With that codec turned on, the Dahua 4421's bitrates are likely to be much lower. In our test in similar scenes, low light/low motion bitrates under 1 Mb/s were common.

As with other new M30 cameras, there are two key physical changes to the M3046-V compared to older M30 models:

Most notably, the cable whip found in the M3004/3005 has been replaced with an Ethernet jack. This whip was a point of contention, with many integrators strongly opposed, but some preferring it. 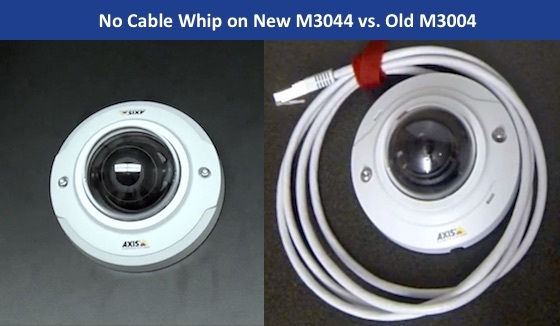 Past M3004 and M3005 models were limited to 54° tilt, requiring that they be wall mounted in many cases, as the camera could simply not look "up" far enough to capture long hallways or other areas (covered in our original M30 shootout). The new M3044/45/46 do not have this limitation, with the gimbal able to tilt up further, near horizontal. 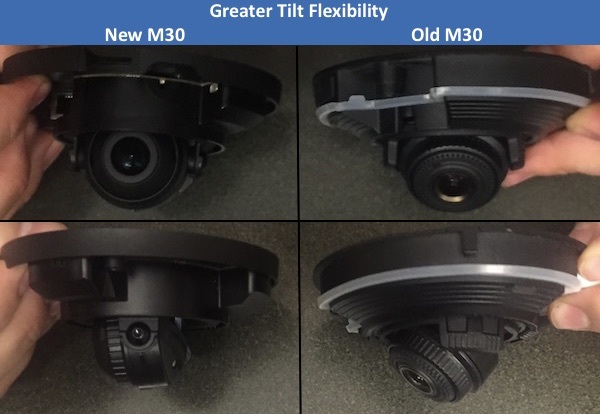 M30 series configuration is nearly identical to past cameras. However, these cameras include true WDR (simply named "wide dynamic range" in the web interface) as well as Zipstream, not found in past models.

WDR controls consist of a single dropdown for on/off, seen below. Other camera settings options have remained essentially unchanged. 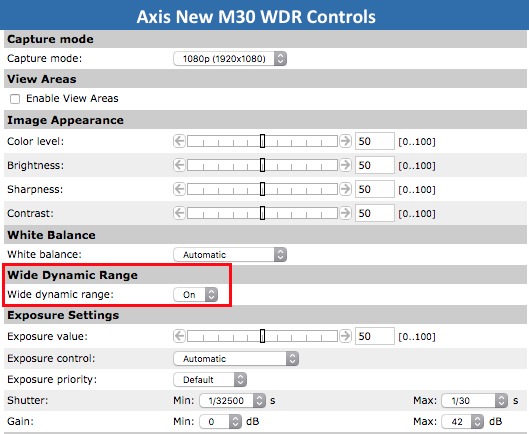