While fisheye panoramic cameras have been around for more than a decade, over the last few years momentum has accelerated with a number of new entrants. Now, Axis is launching its own panoramic camera - the M3007, sure to accelerate the market. In this note, we examine how Axis's integration approach differs from others, how it will impact critical 3rd party VMS support, what key limitations it has and how it stacks up against Immervision, Arecont and others. 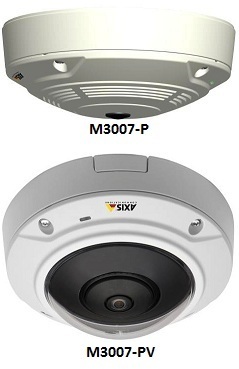 The M3007 is a single-imager fisheye panoramic camera:

The video below demonstrates the quad view:

Axis is claiming a "coverage area" of about 7,000 square feet with the M3007, or a radius of about 50'. At this range, this is ~8 pixels per foot. Video at this resolution is suitable for detection but only in ideal lighting conditions, providing few details, as can be seen in our PPF comparison. This is not unique to Axis, but is a common problem among panoramic cameras, due to their extremely wide field of view.

At release, the M3007 will be integrated with Axis Camera Station and Axis Camera Companion. However, ACC will only provide the 360º overview, with no dewarped views available.

Third party VMSes can call up different views with no need for dewarping on the VMS client side. This eliminates implementing complex client-side dewarping SDKs, instead calling up different views similar to PTZ presets. While no third party integrations are available yet, given the relatively simple integration approach and Axis's large market share, we expect this camera to have the broadest third party support of any fisheye in the next year.

There are important drawbacks to Axis's approach compared to client-side controls:

The M3007 is priced moderately lower than many other panoramic options:

Despite Axis' lower price, Mobotix, Sentry360, and ImmerVision all offer client-side immersive controls, instead of on-camera dewarping. Additionally, others offer higher-resolution options than the M3007, with options up to 10MP from Sentry360. Finally, ImmerVision provides users with the widest range of camera options, allowing wide dynamic or low-light cameras to be used to better fit applications. However, given that Axis' entire camera is only slightly less than the cost of just the Immervision lens, this will likely push ImmerVision into more of high end niche use cases.

The most direct comparison is likely Vivotek's 5MP fisheye (FE8172) which typically integrates with no client side dewarping. However, in a surprising turn of events, the Vivotek FE8172 street price is $200+ more than Axis's MSRP, making the Axis quite attractive.

The other important comparison is Arecont's SurroundVideo line, a multi-imager panoramic offering. While Arecont offers 360 and 180 versions, the Axis models only potentially compare to the 360 versions. However, the Arecont 180s (with 4 imagers each covering a 45 degree area) are far more popular than their 360s and will almost certainly provide far more image details than the Axis's due to the Arecont's 180's much greater pixel density. As such, we do not see Axis's M3007 as a strong alternative or threat to Arecont's popular 180 models.

Ultimately, the M3007 is likely to push mainstream acceptance of panoramic cameras. With Axis, the best-known brand in IP cameras, and an integrator favorite, entering the panoramic market at an attractive price point, this will draw more attention and respect. Further, their decision to implement on-camera dewarping via their SDK should make VMS integration easier, and help spur wider adoption, which has been a key challenge for panoramic camera manufacturers in the past. However, those preferring client side dewarping and controls will likely be disappointed.