Axis has been busy promoting speciality devices like IP horns and video intercoms.

However, they have quietly released a new series of low-cost HD cameras with true WDR and Zipstream support, specifically the 720p M1124 and the 1080p M1125.

We bought an M1125 and tested it against Axis' own high-end Q1615 as well as Samsung WiseNet III camera and Hikvision to see how it performed.

For ~$400, the Axis M1125 is a competitively strong camera and the first relatively inexpensive impressive camera from Axis in a few years. With solid true WDR, low bandwidth with Zipstream enabled, decent non-IR low light and a small form factor, it is worth considering for indoor applications.

The most notable elements missing are integrated IR and auto focus.

Though this does not address the lowest cost, fixed focal segment of the market where Axis remains weak, in the 'mid market' where buyers want varifocal lenses, better image quality and reduced storage costs, this will be attractive.

Here are our key findings from the test of the Axis M1125:

The M1125 sells online for ~$400 USD. An outdoor model, the M1125-E, is also available, for ~$500 online. This is priced similarly to 1080p true WDR models from historic lower cost leaders Hikvision and Samsung.

The M1125 is smaller than most box models, only about 4" long, not including lens.

We review the physical features of the camera in this video:

Configuration of the M1125 is very similar to other Axis models, with the main differences being its inclusion of Forensic Capture and Zipstream, found on few Axis models.

Users should refer to our full test of Axis Zipstream for full configuration information.

We tested the Axis M1125 in our conference room scene and WDR scenes, and below users can see the FOV used for our WDR scene: 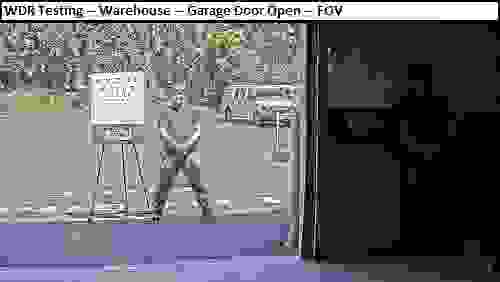 With WDR ON, we see that the Axis M1125 and Q1615 perform almost identically in both the light and dark sections of the scene. 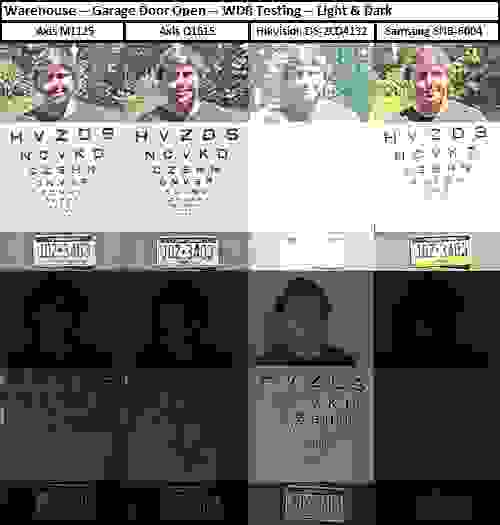 Finally, we shot the cameras out in our conference room scene for baseline image quality. Below is the FOV used: 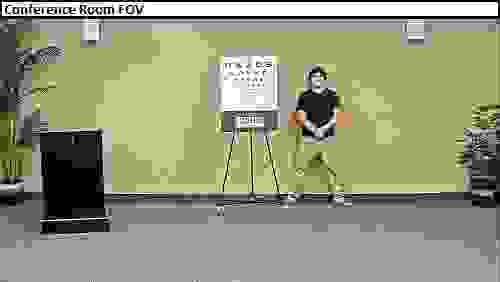 In full light (~160 lux), the Axis M1125 and Axis Q1615 are very similar, with only slight white balance differences and the same details in our subject and test chart visible. 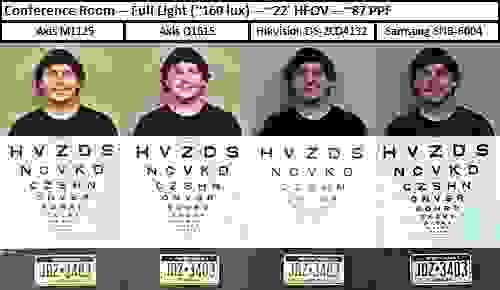 In the dark (~0.01 lux), the Axis M1125 is slightly less effective than the Q1615, though no practical details are available in either camera. The Samsung SNB-6004 is able to capture a few lines of the test chart and license plate, but no details of the subject, while the Hikvision camera clearly shows the subject and chart, but washes out the license plate. 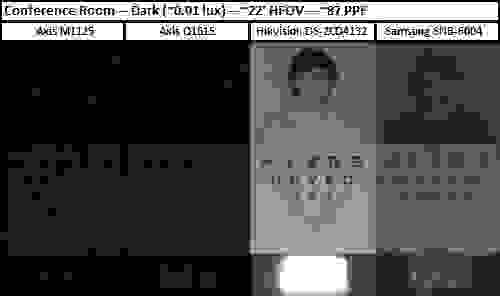 The M1125 is one of the first Axis models to support their Zipstream bitrate reduction features, which we first tested in the Q1615.

Like the Q1615, significant bitrate reductions were possible using Zipstream. The M1125 followed the same patterns as the Q1615, with dynamic ROI reducing bandwidth significantly in dark or busy scenes (30-40%), while the dynamic GOP reduced bitrate by ~75% in still scenes.

Because of these Zipstream savings, the M1125 has some of the lowest bandwidth consumption in this test, lowest in all scenes aside from ~0.1 lux, where the Hikvision 4132's integrated IR accounts for its lower bitrate. 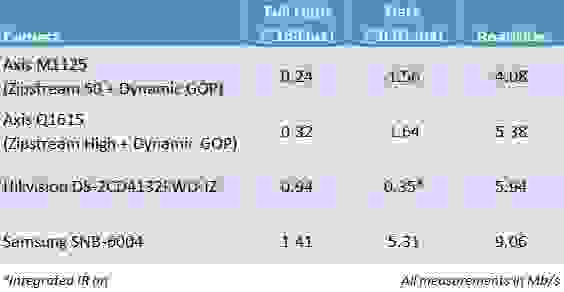