The PC is dead?

Not in the surveillance word, where boxes are the big new innovation thing.

Axis has joined the fray with their S10 series of NVRs.

In this note, we review features, pricing and competitive positioning. 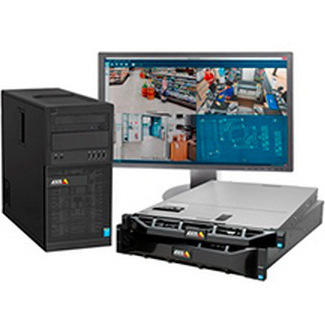 Axis is pre-loading their Camera Station VMS software onto 3 Dell OEMed machines, for 16, 32 and 48 channel units.

Like Axis VMS software, these NVRs will only support Axis own cameras. Analog cameras may be connected via Axis encoder appliances. Built-in encoder cards are not offered.

Each model includes the software installed and licenses already activated.

Like any NVR, the key benefits include simpler setup, less risk of performance issues (compared to underspecifying one's own box) and included hardware support.

Likewise, with its price point, it is not attractive to cost conscious buyers. However, it in a similar price range to big name NVRs with comparable feature sets.

Every time Axis expands its video management offerings, VMS manufacturers recoil in fear of competing with one of their largest camera partners.

Axis, in its promo video, calls the S10 'the perfect fit for manufacturing facilities, larger retail stores and schools', which will not allay those fears. However, given the limited model options and the fundamental self imposed constraints on Axis VMS software (no third party camera support, no enterprise management), this should not be a significant competitive threat.

While this is an incremental advance that might help Axis somewhat, we do not think it will make much of a competitive shift.

Axis Employees Get $100 Bonus For Beating Out Avigilon on Oct 11, 2016
Axis offered its employees a $100 bonus for beating out Avigilon's VMS,...
Exacq Adds On-Site Hardware Repair on Apr 18, 2016
Integrators, want Exacq to send someone to fix your NVR next day?  Well,...
Axis End-to-End Solutions are Here! on May 20, 2015
Sorry partners... The new Canon subsidiary and Milestone sibling has changed...
Axis Bad Financial Results Again (Q4 2014) on Jan 30, 2015
Bad results last quarter spurred a debate about Axis performance. Now, Axis...
Axis Admits Access Control Expectations Low on Oct 17, 2014
Axis entrance into access control had been anticipated for years. Last year,...
Winners Losers Fall 2014 on Oct 13, 2014
We are all losers, IPVM included. The historically poor new releases for...
ASIS 2014 Show Floor Review on Sep 30, 2014
What Happened to the New Products? Nothing major at all....
ASIS 2014 - 17 Manufacturer Tech Review on Sep 30, 2014
This long post recaps key findings from IPVM team members meeting with...
Comments (8) : Members only. Login. or Join.