Axis has released a new series of minidomes which may be a bit confusing at first. Doesn't Axis already have multiple minidome series? Yes. Then how does it relate/compare? In this note, we dig into the features, positioning and pricing comparing the new line to Axis's existing series, to Vivotek's recent minidome and to Sony's offerings. We conclude with an examation of the impact this has on Axis Camera Companion.

[UPDATE August 2012: Axis has announced the cameras are vandal resistance. This is a change from the original June 2012 announcement.] 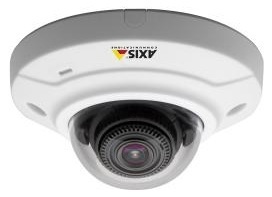 The M3004 and M3005 are compact indoor minidomes with the following key features:

Measuring only about 4" in diameter, by 2" high, completely surface mount, these models are some of the smallest domes available. This is higher-profile than Axis' existing M3011 and M3014 cameras (~1.1" high). However, existing M30 models must be recessed into the ceiling 3"+, making the new series practical in areas with shallow or inaccessible ceilings where old models were not. These cameras are only moderately larger than Vivotek's recently-announced "World's Smallest IP Fixed Dome", which measured 3.5" x 1.9", but offered only in a 1MP model, with no 1080p option.

Another notable point in this release is the lack of any SD or SVGA options, instead starting with 720p. By comparison, SVGA models were offered in most recent Axis releases. We see this as another indicator of the market shift from SD to megapixel resolutions, and expect this trend to continue.

Users should take note of the very wide FoV for both cameras - 80º for the 720p and 118º for the 1080p. That is quite wide. While it will be useful for overview/area shots, it will not provide great details for objects more than ~10 feet away. Do not expect to zoom far away and capture facial details, etc.

Before the cameras started shipping, they were upgraded to IK8 vandal rated . While it does not provide the same vandal resistance as other Axis (and leading) dome cameras, it should be good enough for many indoor applications that want the comfort of a 'vandal' rated product.

Even relative to low cost providers, these new models are quite price competitive. For instance, the new 720p model is almost the same price as the Vivotek FD8136, a comparable mini dome, with both selling for less than $300. The new Axis cameras are similar to the Sony minidome series but ~$100 less (e.g., Sony CH210).

Introduction of models such as the M3004 and M3005, with built-in MicroSD storage, strengthens the position of Axis Camera Companion, as discussed in our overview of Axis' recent low-cost HD cube cameras. Previous models lacked on-board storage, requiring NAS to be used, adding time and expense. With this announcement of low-cost domes under $300, ACC becomes more competitive against VMS and VSaaS, and even DVRs.

Overall, the small form factor, high resolution and low cost of the new series will make it attractive. For those excited or fearful about ACC, this release will heighten those emotions.