For more than a decade, video analytics has frustrated and disappointed users.

Compared to Axis' previous effort, VMD 3, some false alarm sources have been reduced or eliminated. In our tests, Guard Suite did not classify blowing debris, birds, or rain as objects, occasional problems in VMD 3.

Compounding the lack of intelligence is a cumbersome setup process that lacks advanced controls or options that might help compensate for this, unlike Avigilon, which largely handles this automatically, and DVTel ioimage that provides sophisticated setup and calibration to improve performance.

Do not use Axis Guard Suite unless you use it in simple indoor scenes or verify in at least one week of testing in the exact location you plan to use it. Despite Axis' market claims, Guard Suite is not 'robust'.

We expect integrators using this to be frustrated by the poor performance and the inability to overcome it. We do not see this being widely used, forcing Axis to continue to focus on 3rd party analytic apps.

In this section we break down the key issues impacting Axis Guard Suite performance, including false alarm issues, missed activations, and more, in this video:

Axis' analytics, like VMD 3 before it, suffer from numerous false activations from brush, branches, foliage, and other vegetation. In the scene below, the brush to the right side of the FOV is seen as objects by the camera, despite calibrating for size and perspective. This extended so far as to occasionally cause false activations on the tripwire seen in the grass.

Other analytics, such as Avigilon and ioimage did not experience these frequent activations.

In our testing, subjects crossing a tripwire using Axis Fence Guard were often not detected. In the scene below, the camera simply does not detect our subject as an object until he is past the line. Avigilon's H3A camera was 100% accurate using this same setup.

At running speeds, this was even worse, with Axis missing runners more than 50% of the time, while Avigilon was successful >90%. In the example below, despite the subject being seen as an object prior to running, the camera fails to detect him once he begins moving.

Note that in wider FOVs, with more time to detect the subject as a human object, tripwire reliability issues were not as severe as the examples above. However, Axis still had trouble detecting running subjects, missing them about 20% of the time.

At night, missed detections at normal speeds were frequent, as well, even with the subject in well light higher contrast areas of the scene, reviewed in this video:

Using a ~60° horizontal field of view, Guard Suite analytics were accurate at a maximum width of about 175' using the 1080p Q1615 during the day. This is about 20% less coverage than the Avigilon H3A bullet, which covered ~225' HFOV.

Note this HFOV is the maximum where reliable detection was possible (>95%). Beyond this, subjects at normal walking speeds are more frequently missed, making detection spotty. 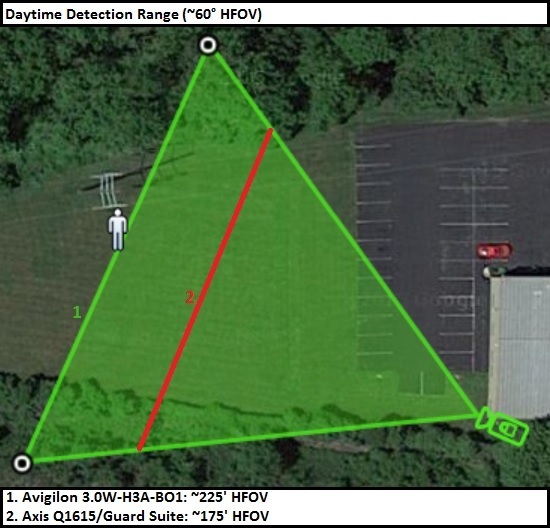 Axis Guard Suite introduces perspective calibration not found in their previous applications, such as VMD 3, intended to better calculate distance and object size by measuring objects in the FOV. 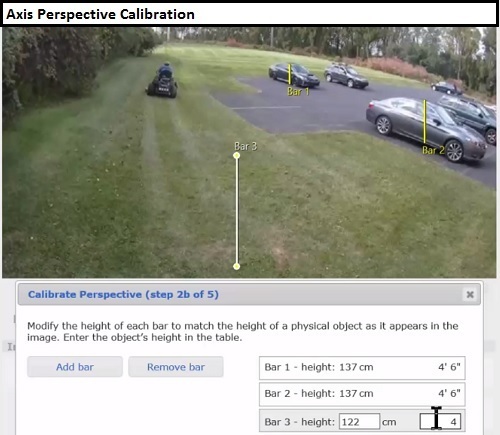 Axis provides limited guidance on this process, only instructing users to use measurements "at different distances from the camera."

Compared to DVTel, which also requires calibration (Avigilon does not), there are several key limitations in this process: 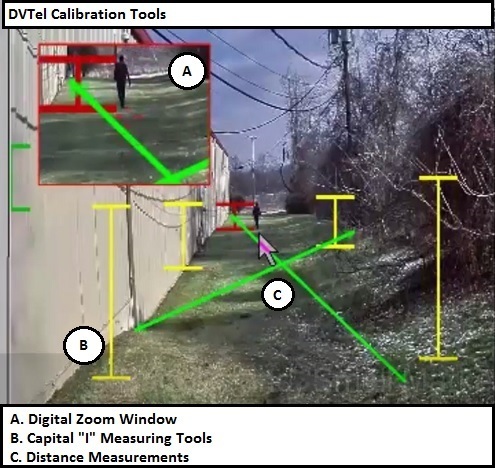 Additionally, Axis provides no visual verification tools to check the accuracy of measurements, such as height or distance, to ensure measurements are accurate. DVTel and Bosch both provide this feature.

Finally, Axis provides no maximum size settings or vehicle vs. human discrimination. All objects are detected, regardless of size/shape.

In the video below we demonstrate the Axis calibration process and the issues noted above:

Currently, Axis Guard Suite is limited to manual integration via TCP serial or other means only. It is likely that integrations will be complete in the next few months, with Axis stating:

"AXIS Guard Suite will be supported by AXIS Camera Station and leading VMS providers Genetec and Salient Systems through Axis cameras’ event stream, while Milestone Systems will provide direct integration. Support by Aimetis Corp., Exacq Technologies and OnSSI is planned to be available by the end of 2015."

As of now, users may display alarm events by overlaying text on the video via events in the camera, as seen at the top of the screen below. Users may set a motion zone to detection motion only in the area where this text appears, effectively alerting on the analytic rule:

Users may also send TCP serial notifications from the camera to VMSes which accept them. This is demonstrated in the video below which shows the integration of Guard Suite with Exacq, with event text searchable and optionally overlaid onto live video.

Axis Guard Suite Video Analytics Tested on Jun 25, 2018
In 2015, we declared Axis' Guard Suite analytics "weak", with missed...
Axis CTO: Deep Learning 'Exciting Space' But Urges Caution on Dec 27, 2016
Deep learning interest is rising in video surveillance. 2016...
Hikvision vs Exacq VMS on Jun 15, 2016
Hikvision and Exacq are two of the most commonly used recorders in the...
Favorite Video Analytics 2016 on Feb 22, 2016
Video analytics are security professional's choice for the next big...
Axis Acquires Video Analytics Firm Citilog on Feb 01, 2016
Axis rarely makes acquisitions. They get acquired, of course, (i.e., by Canon...
Top 5 Video Surveillance Product Advances Going Into 2016 on Dec 31, 2015
Here are the 5 product areas that have had the most meaningful product...
Security Cameras 2016 Review on Dec 23, 2015
In 10 minutes, this note explains the current state of security /...
2016 Top Security Expansion Targets Disclosed on Nov 17, 2015
100+ integrators told IPVM what products, technologies and manufacturers are...
The Siliconization of Surveillance Cameras on Oct 29, 2015
This is an insightful observation from Vicon's CEO Eric Fullerton [link no...
Winners Losers Fall 2015 on Oct 12, 2015
There's a lot of losing right now, unfortunately. The industry is moving...
Axis Releases Their Own Video Analytics on Sep 28, 2015
After years of promoting third party video analytic applications and...
Comments (9) : Subscribers only. Login. or Join.