Axis' Camera Application Platform has been around for years, but has mainly been limited to complex analytic apps.

We tested one of these, simply named Monitor Me, in this report. This app allows monitoring and graphing of camera CPU load (shown below) and bandwidth, as well as ACAP application status, parameters not available by default in Axis cameras.

Monitor Me allows users to track camera parameters not available by default in Axis cameras, and trigger alerts based on them. CPU load and bandwidth may be especially useful in diagnosing camera issues which have proven otherwise difficult to troubleshoot.

However, the need to create custom camera events adds extra integration time and may be confusing or complex to many users.

Given that it is a free add-on, Axis integrators may find this helpful especially in troubleshooting cameras.

CPU and bandwidth measures were useful, displaying information not otherwise available via the Axis web interface. Axis default text overlays provide bitrate only for the current stream, not total bandwidth, and CPU load is not available at all.

Alarms triggered reliably in our tests, with alerts sent an average of about 15 seconds after bandwidth exceeded threshold. In some cases, alert time was longer, up to 30 seconds, or shorter, nearly immediate.

Events did not integrate with any tested VMS (Genetec, Milestone, Exacq) out of the box. Events may be sent via TCP serial strings to supported VMSes, such as Exacq and Milestone, or used to trigger emails or SNMP traps, etc.

Monitor Me is available free from ACAP Share. No licensing is required.

Monitor Me installs the same as any other ACAP application, simply uploaded to the camera. In the video below we review the user interface and how to configure/receive events using Monitor Me.

Once installed, users may enter the main Monitor Me user interface, which contains four settings tabs:

This tab displays current CPU load both in text as well as a graph. Note that these numbers are not percentages, but are instead based on loadavg, a Linux command. Because of this, users cannot directly gauge percentage of CPU use, and thresholds for alerts should be set based on observing camera performance and average load.

ACAP Share has this to say about CPU Load:

On a single core chip the normal operation load may be between 40-170 and lower on a a multi-core. This does not mean that the camera is be overloaded if the value is higher. In order to determine overload you need to monitor the CPU load over a longer period of time during normal operations. 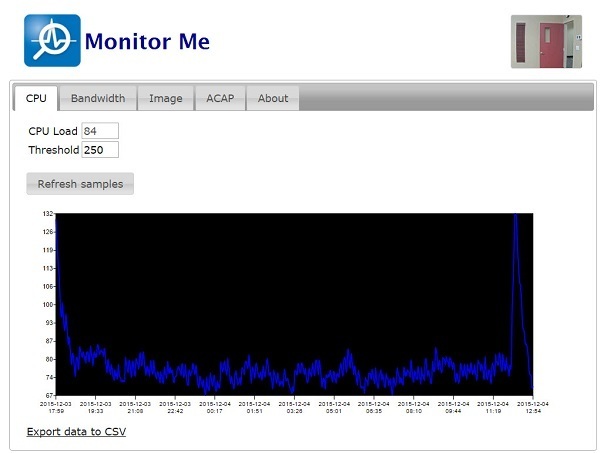 This tab displays bandwidth use and history similar to CPU load. Users may set a high threshold (6 Mb/s and up) to generate events based on high bitrate. Note that this is total bandwidth usage, not individual specific stream usage. 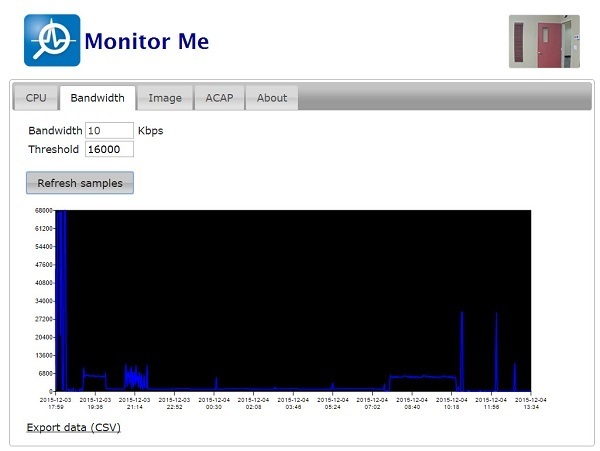 The image tab allows users to capture a reference image for future comparison. For example, if a high CPU alarm is received, users may compare current video to the reference to check for image degradation. Samples may be manually refreshed and are also automatically taken at midnight and noon.

Note that this a manual visual comparison only. The application does not compare current images to reference (a feature found in some camera tampering analytics). 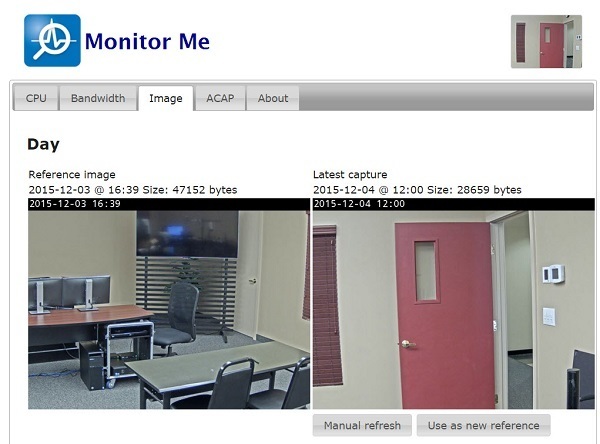 Finally, this tab allows users to monitor the current state of one or more ACAP applications. This can be used to inform users if an app crashes or restarts unexpectedly, for example. 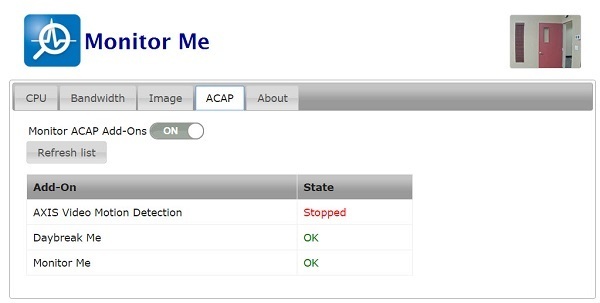