[UPDATE August 2015: We recently updated firmware on this camera for an upcoming test, from 5.55.5.1 to the new 5.80.1. In doing so, WDR increased significantly, with shadowed areas more visible than previously tested. This October 2014 test has been updated inside.]

Two years ago, Axis declared the megapixel race over.

Now, they are among the first to release a 4K (8.3MP) camera. However, the question is simply: do we really need more pixels?

We bought an Axis P1428-E, to see what advantages and drawbacks it has compared to existing multi-megapixel cameras.

As this is the first 4K camera model readily available, it cannot yet be compared to other 4K options.

Given the camera's relatively moderate price point for outdoor 5MP+ offerings, the main driver for adoption will be use in wide, evenly light areas.

The biggest limitations will be the P1248e's moderately poor low light performance and the very weak WDR performance. This should weigh heavily in to outdoor scenes that frequently suffer from both issues.

For all around best image quality, 1080p WDR / low light cameras like Axis' own Q1615, Pansonic Series 6, Sony Gen 6, Samsung Wisenet III, etc. will likely be better fits with only a modest decrease in details for wide, well, evenly light times of day.

Note that these recommendations, outside of increased framerate, generally match what we found in our 10MP vs 5MP vs HD Shootout. Few manufacturers (the Bosch 5MP starlight being one notable exception) have done much to address low light performance above 720p or 1080p resolution, so it remains the key performance issue.

This video reviews the physical construction of the P1428-E, a relatively new outdoor bullet form factor for Axis.

We first tested the P1428-E against other multi megapixel cameras in a relatively narrow field of view, about 20' wide, at multiple light levels. 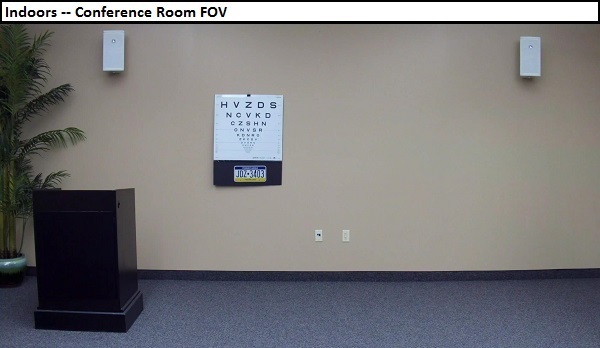 In full light, all cameras provide strong details of the subject and due to very high PPF levels and strong lighting. The P1428 and Arecont AV10115 are roughly similar in performance, reading down to line 9 on the test chart. 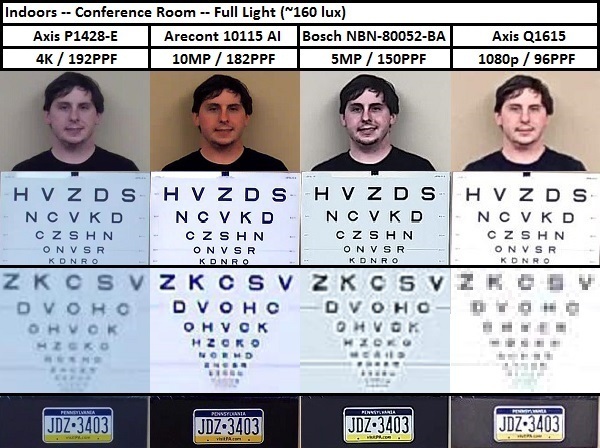 We also tested the cameras for color fidelity at this light level to see any possible advantages in the 4K camera. While the P1428-E was closest to the reference chart, no cameras had major color reproduction issues in this scene. The Axis Q1615 and Bosch NBN-80052 were both slightly desaturated.

In low light, about 1 lux, the P1428-E only shows rough details of our subject. Both the Q1615 and NBN-80052 show facial details, while the Arecond 10MP produces no usable image. 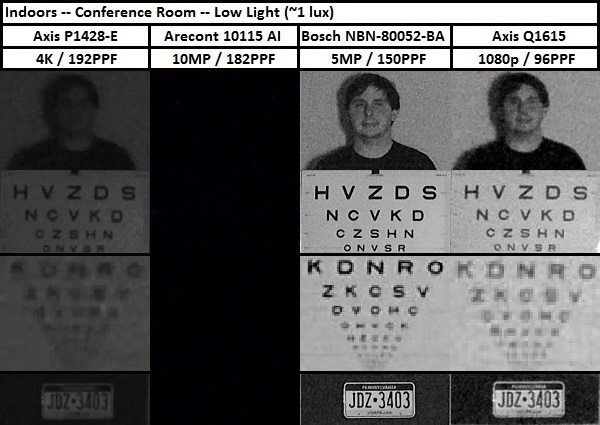 At ~0.1 lux, the P1428-E provides only very slight detection of the subject and chart, while the Arecont AV10115 again produce no usable image. The Axis Q1615 and Bosch NBN-80052 Still provide some legible lines of the test chart, though subject details are obscured. 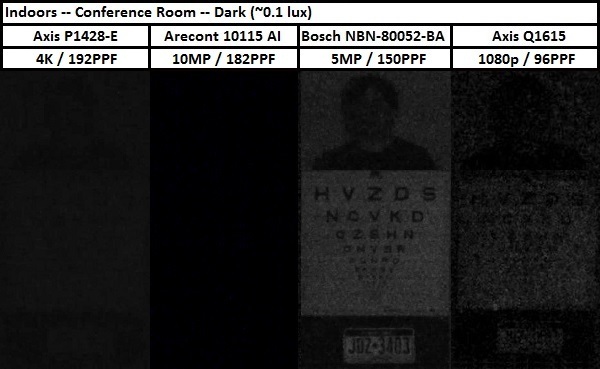 We widened the horizontal field of view to about 50', still under strong office lighting, ~200 lux. 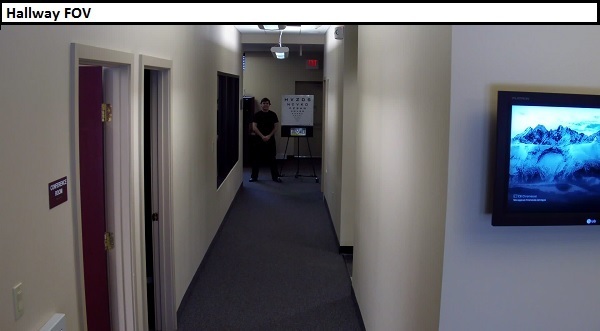 The Axis P1428-E outperforms the 10MP Arecont in this scene with more subject details and legibility of the chart. However, even the slight variations in light seen here have a negative impact on the P1428's image quality, with the true WDR Q1615 providing similar facial details as a result, despite PPF being half of the 4K camera.

The Bosch 5MP is the strongest performer in this scene due to increased PPF and better dynamic range. As such, it provides moderately better details of the subject, though fewer lines of the test chart (4/5 vs. 6/7 in the Axis P1428-E). 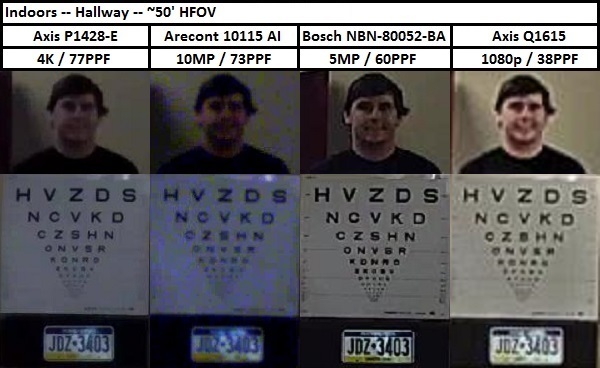 We tested WDR performance against strong sunlight through an open overhead door and the dark area next to it, seen here in the P1428-E: 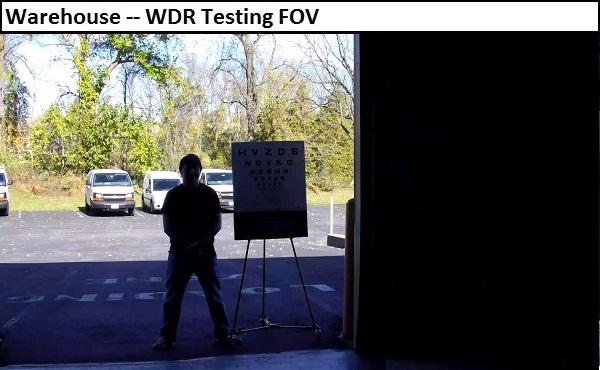 The P1428-E was the worst performer in our WDR test scene, with poor details of the subject against strong backlight, while he was completely undetectable in the dark area next to the overhead door. 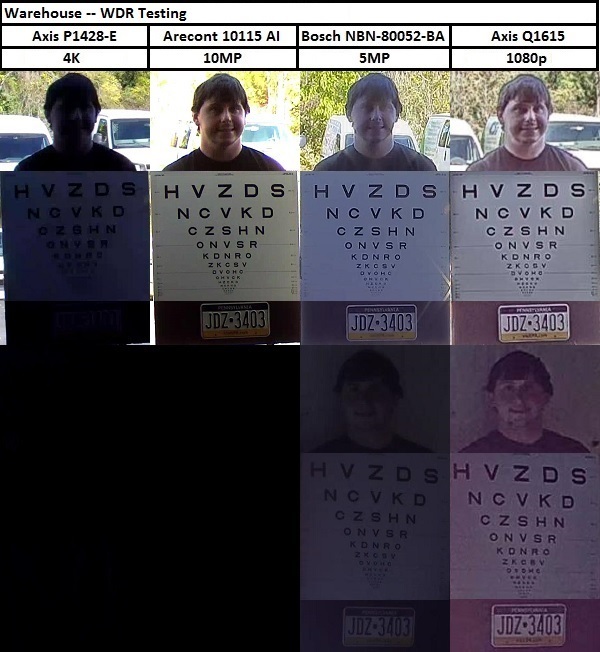 Users may download video from these sample scenes, taken to show differences between the 4K P1428-E and other multi-megapixel cameras.

In this scene, cameras were placed on the corner of a busy intersection, showing vehicle and pedestrian traffic. This scene was recorded at 30 FPS with no notable frame drop issues, showing the full 4K30 capability of the P1428-E. Compare this to the 10MP Arecont AV10115's max frame rate of 7 FPS, which it struggled to maintain, averaging 3-4 FPS. Download this scene (136MB Windows .exe) 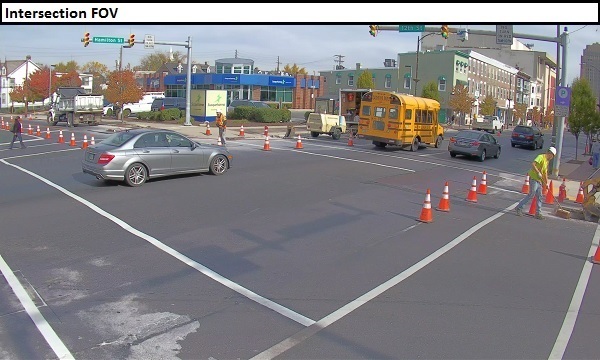 This clip shows camera performance in a long interior hallway. The FOV width is about 50' at the subject's furthest location. Download this scene (90MB Windows .exe) 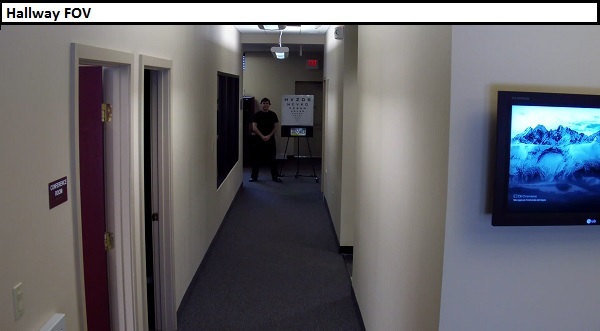 The P1428-E had the lowest bandwidth of any camera tested in our indoor test scene, and was second only to the Bosch 5MP camera measured in our busy outdoor intersection. This is especially notable given it is 4x the resolution of the 1080p Axis Q1615.

All measurements taken at 5 FPS with quantization standardized to Q28.

After testing the Axis P1428-E initially, we have since updated the camera firmware and, according to the Axis patch notes, the fix is as follows:

This fix is reflected in the image comparison below, with the new firmware (5.80.1) on the left compared to the old firmware (5.55.5.1) on the right. Our dark portion of the scene has improved significantly, with our subject and chart clearly visible. 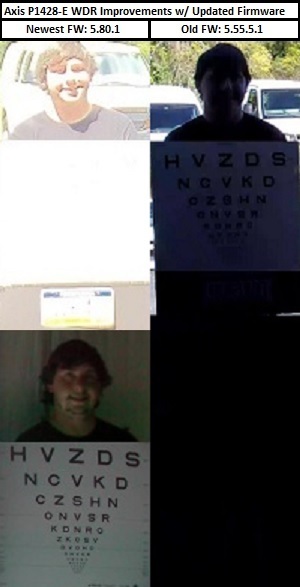 However, WDR is still an issue in bright areas, with our chart overexposed and illegible and our subject's face washed in sunlight.

The firmware versions used in this test: