Avigilon has responded to IPVM's "Avigilon's Dirty Tricks" post, justifying their home page advertisement comparing analog to Avigilon's quality. Unfortunately, this raises far more serious questions about Avigilon's approach and its conformance with US laws on truth in advertising.

[UPDATE: This home page was replaced in July 2013 with new comparisons that substantially correct the issues listed herein. Images and analysis at the end of this post.]

Here is the ad / images referenced:

It shows an 'Analog' image vs an 'Avigilon' image but evidently that is not actually the case.

"Nowhere do we say it’s actual, as it's really just meant to visually illustrate how powerful our system can be when compared to analog."

So when Avigilon shows an image labelled 'Avigilon', they do not actually mean it is from an Avigilon camera.

They further explain that they, "created a scene that is representative of what you could do with one of our megapixel fixed cameras when you digitally zoom, as compared to a fixed analog camera." Of course, in the ad, they show an 'Avigilon' image with a larger coverage area than the 'analog' one without any reference or explanation of digital zoom.

Even accepting digital zoom from a larger scene, which one of their cameras will work?

Here's the whole scene with a red box around the area that they claim to digitally zoom:

That's a 70+ foot wide FoV. To digitally zoom and get the level of detail displayed in the Avigilon image (easily 60ppf), one needs at least 4200 horizontal pixels. Of Avigilon's dozens of models, only the two most expensive cameras match (the 16MP and 29MP). [Note: our reference guide to using and calculating PPF.]

Unfortunately, Avigilon uses a widescreen 16:9 aspect ratio and the term 'HD' that can confuse readers into believing it is a regular HD camera, not a super expensive/proprietary megapixel one: 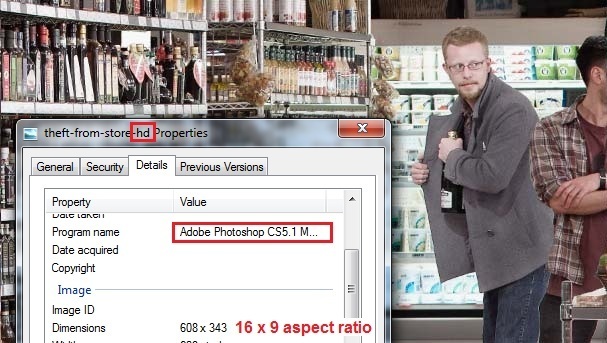 The US government has rules to protect the public from deceptive marketing. The FTC's guide on Internet advertising explains what's right and wrong:

However, we believe Avigilon violates a number of these rules:

Here are 4 simple changes that Avigilon can and should make to their ad that we believe would help them conform to US FTC guidelines and more accurately express their position:

The basic comparison remains but with more context and information that helps a consumer understand what is being claimed.

Can Avigilon Be Trusted?

Unfortunately, we are left with the 'Avigilon doctrine' - unless Avigilon explicitly says something is actual we must assume it is an illustrative fiction.

They continue with grossly misleading claims. From their current 16MP product page:

This is even worse than their 'up to' claims that Avigilon typically uses to fool consumers. Will Avigilon defend this by saying they didn't use the word 'actual'?

Avigilon should correct the home page ad, the 16MP claim, and carefully change any other misleading language.

Avigilon should be better than these dirty tricks, no?

Now, Avigilon has replaced its 16MP marketing claim. Here's the before and after.

The claim to replace cameras has been replaced with 'provide the same resolution'. Of course, that's actually pixel count, not resolution, and has its weaknesses as well (see our resolution tutorial). A first step.

Avigilon has a new website home page that incorporates our recommendations, fixing the most egregious errors.

Here is an example of the new image comparisons they use:

I looked at their website after your previous article about their bogus advertising. Their ads are indefensible and misleading. There were a lot of comments on your previous article defending their ridiculous advertisement with the stadium. That ad was even more outrageous, pretending that you can have such a wide FOV covering thousands of people and still zoom in to get high resolution pictures of faces at 30fps. Their highest resolution cameras could not capture that detail, and they only run at 2 or 3fps if I'm not mistaken. The advertisements in this and the previous post clearly violate the FTC act.

John, Did you EVER order a Quarter Pounder that arrived looking even remotely like what's pictured in the advertisements? Misleading consumers/end users is a common characteristic of marketing by many corporations, raised to an art form by others. Betcha most end users will open not with "How can I get that performance" but instead by "what's your lowest dollar?". Our role is to serve as the end user's subject matter experts and to deliver on that premise. The industry sorts out the chaff.

Jack, it would be great if the industry naturally sorts out the chaff. Unfortunately, (US) security integration has no licensing, no training requirements, nothing. Anyone can put up a shingle and claim to be a surveillance expert. Either through ignorance or mailice, security integrators can trick their end users. Obviously, there are many ethical, high quality integrators but as an end user, how do I tell who's who?

Whether or not one likes the US government having such rules against false advertising, they do exist and the question remains, whether or not, as is, Avigilon violates those rules.

Does any of the big company admit its mistakes if it is found to be guilty fo any wrongdoing? I would not think so, or at least they are slow to admit provide that they have to make up a good excuse that they have done something wrong.

For big companies there are real legal risks in both doing and admitting false advertising. From what I have seen, the really big manufacturers less often make such claims. I suspect that's because they are more concerned about legal risks and more sophisticated about how to market without exposing themselves to them.

I am curious what Avigilon will do. Leaving the home page the same is risky, modifying it seems to admit the issue. Perhaps the best way is to quietly remove it. That said, I could not predict Avigilon's move at this point.

The general level of (immature) behavior of vendors in the Physical security marketplace makes this whole thing sadly unsurprising. Hey, at least they're not threatening to sue all of us for subscribing to your website. One wishes they'd spend their money on engineering, perhaps, or at least more civilized marketing. Is their gear really worth all this attention?

"Is their gear really worth all this attention?"

Yes, they are a big player now with a really high growth rate. And they spend an enormous amount on marketing, roughly double what they spend on R&D.

They really don't need this type of advertising as their products speak for themselves. They are hands down the most reliable, efficient solution available. That is Avigilon's competetive advantange - not image quality alone. Easy to use, rock solid / extremely reliable and a much more efficient data structure than every other solution. The only problem is it's hard to advertise these things as you can only truly appreciate what Avigilon offers after having utilized other platforms.

Joshua, I agree they do not need this. Typically you find such risky claims with companies that are struggling or not established. It's one of the more puzzling elements of this.