Now, it is still significantly more expensive than many fixed focal MP cameras (e.g., Hikvision and Dahua), but the Micro Dome line is almost 50% less than Avigilon's next lowest cost line. 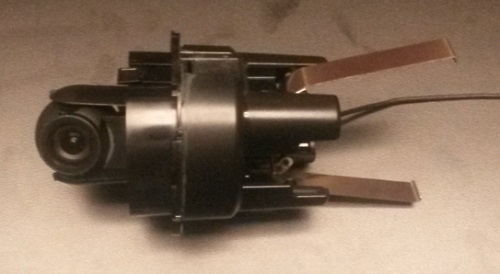 And put it to the test against the Axis M3004, the Dahua IPC-HD2100N and the Hikvision DS-2CD7164-E. We tested in full light, low light, dark and WDR scenes. Below is a preview of the dark scene.

In full light, image quality is similar to other cameras tested with no notable issues.

The Avigilon HD Micro Dome had the worst low light performance out of all cameras tested. The Axis, Dahua, and Hikvision minidome models all performed better in low lux scenes, with more detail in our subject and chart visible than the Avigilon camera.

In addition, Avigilon offers no integrated IR options with any of its lower cost, sub ~$500 MSRP models.

WDR performance of the Avigilon HD Micro was poor compared to other compact minidomes in this test, against both strong backlight and dark areas of the scene. Using maximum BLC settings, details of our subject were improved in both cases, though background became strongly overexposed.

Installation is simple and quick, requiring only a hole to be cut in the ceiling, with no additional hardware required.

The Avigilon in-ceiling HD Micro Dome's only standout feature is its ease of installation, which may be moderately faster than surface mount models, though requires a much larger ceiling penetration. Outside of this, its poor low light and WDR performance and premium pricing make lower cost, better performing options more attractive.

Since this is Avigilon's lowest cost line by far, it shows a notable weakness in Avigilon's product positioning in the low end of the market. It also explains why many Avigilon integrators have been taking up Hikvision cameras that perform equal or better to the Avigilon HD microdome at around half the price.

In this video, we review the physical construction of the Avigilon 1.0-H3M-DC1 minidome and compare size to an Axis M3004.

Installation of the HD Micro Dome is simple, requiring no additional hardware. Installers drill a 3" hole, insert the camera, and push to lock engage springs on either side, holding the camera in place. Then, the shroud and dome are snapped into place.

In our testing, the entire installation process took only about 2 minutes. We review installation in the video below.

We tested the Avigilon 1.0-H3M-DC1 in our conference room scene in full light and various low light and dark scenes.

In full light, the Avigilon 1.0-H3M-DC1 performs similarly to the other 720p minidomes tested, with a few artifacts in our subject face, but we can read down to lines 5-6 on our test chart.

In low light at ~4.5 lux, artifacting is the most viewable out of the other cameras tested, with artifacts present in our subject face and test chart.

With lux down to ~0.3, we are unable to read line 2 of our test chart in the Avigilon image, whereas the other cameras can read lines ~1-2 in each, with some details in our subject's face viewable in the Dahua image. Noate that below this light level, no camera produced usable images. 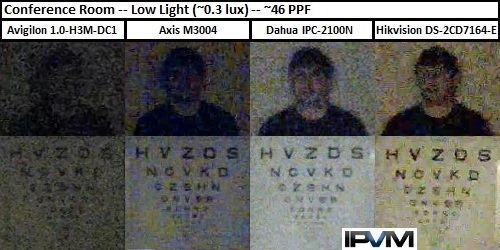 The animation below illustrates the reduction in performance as light levels drop, from full light, to low light, to dark.

Finally, we tested the minidomes in a warehouse aimed at an open garage door. Below is the FOV used for testing. 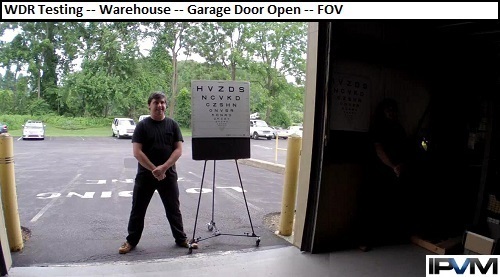 The HD Micro Dome is not a true WDR camera, but includes backlight compensation, which defaults to a value of 0 on a scale of -100 to 100. Using Avigilon's BLC in this scene produces minimal gains in the dark portion of the scene with BLC max, but the light portion of the image is more overexposed, washing out parts of our subjects face and background. 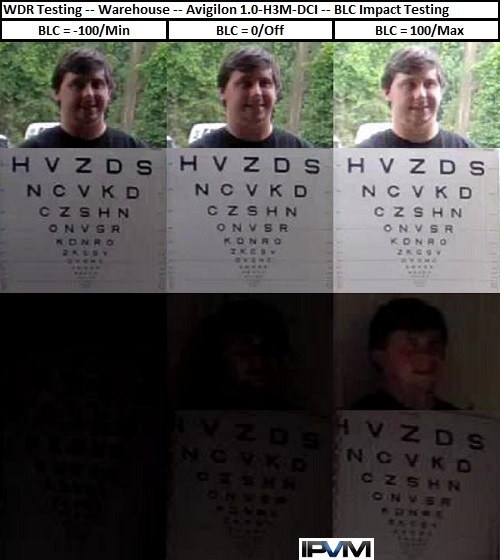 In our WDR scene, the Avigilon 1.0-H3M-DC1 has similar image quality compared to other cameras tested, with shadows visible on our subjects face, but the test chart is visible down to lines 4-5. However, in the dark portion of the scene, our subject is barely visible in the Avigilon and Hikvision cameras and our subject is blurry in both the Axis and Dahua cameras. 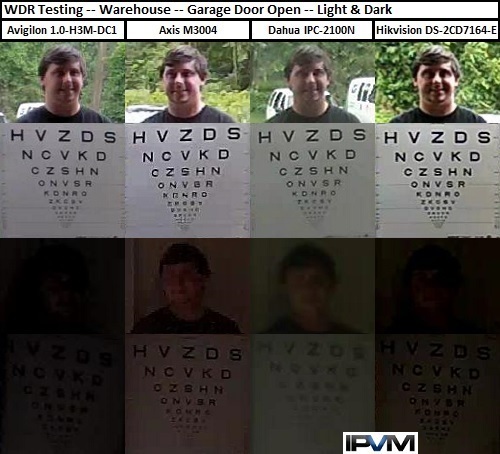 To test bandwidth, we set each camera to 720p resolution, 10 FPS with ~28-29 quantization. Also, bandwidth measurements in "Dark" were excluded since no camera was able to produce a usable image.

The Avigilon HD Micro Dome's bandwidth was lowest in full light among cameras tested, at ~0.22 Mbps. However, in lower light (4.5lx), bitrate spikes substantially to nearly 4 Mb/s while other cameras remain under 2. In very low light, ~0.6 lux, this is even more pronounced, nearly doubling to ~7.6 Mb/s. Only the Hikvision model was higher at this light level.

Listed are the firmware used for testing:

Avigilon H4 IR Mini Dome Camera Tested on Oct 24, 2017
Avigilon has released their successor to the aging Micro Dome, the H4 Mini...
Avigilon Announces New Lowest Cost Camera (Mini Domes) on Jun 06, 2017
Avigilon's first Micro Dome (see IPVM's test) is now 4 years old. Since that...
Avigilon Cuts SL Camera Pricing, Adds Lower Cost Models on Jan 31, 2017
Just months after starting to ship the SL series, Avigilon is cutting...
Avigilon Announced 'Easiest to Install' 'Cost Effective' H4 SL Cameras on Sep 08, 2016
Avigilon's CEO, following weak results and sharply declining gross margins,...
Avigilon Stock Plunges On Bad Financials (Q2 2016) on Aug 16, 2016
Avigilon's stock went down 25% the day after it announced earnings. The...
Avigilon Quietly Slashes H3 Camera Pricing 30-50% on Jun 13, 2016
Pricing has fallen throughout the camera market. But Avigilon has held firm....
Axis Launches New Low Cost Cameras on Mar 22, 2016
Evidently, now is the time to retire the M3004. After releasing dozens of...
Top Manufacturers Gaining and Losing 2015 on Dec 02, 2015
100+ integrators told IPVM what products they are selling substantially more...
Here's What Avigilon Should Do Now on Aug 24, 2015
An Avigilon partner asked: "What would be your Goal if you run...
Avigilon Weak Profits Continue - Q2 2015 on Aug 03, 2015
After spending $39 million buying back their own stock, one would think (or...
Avigilon Dirty Tricks on Jan 15, 2014
Avigilon's products are strong but their marketing is consistently and...
Comments (26) : Subscribers only. Login. or Join.