Avigilon has released their H4 HD line, with promised improvements including their most sensitive low light camera (the 5.0L-), analytics on all models, and a new, less expensive, 4K/8MP model.

We bought the 4K and 5P H4 IR domes to see how they compare to others from Axis, Bosch, Hikvision, and more, seen here during test setup: 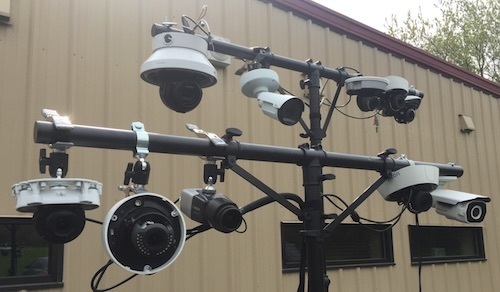 Inside, we examine performance in low light and full light image, bandwidth comparisons, and more.

The H4 has two key advantages in Avigilon end to end systems, however:

See all features of the 4K cameras in the IPVM comparison tool:

The 5MP H4 model has an estimated street price of about $900-1,000 USD. This is similar to competitive 5MP IR models, such as the Samsung SNV-8081R. However, new lower costs 4MP models with integrated IR and zoom lenses have become more common, such as the Dahua and Hikvision models below (~$300 online). These models provide slightly higher PPF due to their 16:9 4MP resolution vs. Avigilon and others' 4:3 5MP, 2688 vs. 2592, with many of the same features (motorized zoom/focus, on board analytics, etc.).

See these cameras in the IPVM comparison tool:

Here are the key findings from our test of the Avigilon H4 lines:

The Avigilon H4 4K camera performs moderately better in narrow FOVs than some competitors, such as the Axis P1428-E (no IR),Panasonic 781L and DVTel CM-6208 (IR domes).

In wider FOVs (60’+) and at longer ranges, details are similar to other 4K IR models, with no clear best, though all outperform the non-IR Axis P1428-E.

In full light, the Avigilon 4K H4 provides fewer details than the Panasonic WV-SFV781L at all ranges, with reduced contrast on the subject and test chart.

And in full light, details were increased due to its higher PPF compared to the 3MP model.

The 5MP H4's bitrates were moderately higher than the Bosch 5MP camera in both scenes, though lower than Avigilon's previous H3 3MP model.

Avigilon's Idle Scene Mode, new to the H4 line, worked without issues in our tests. This feature reduces framerate and increases compression and I-frame interval when the scene is still to reduce bandwidth. Note that this is different from true smart CODECs, which maintain framerate, and may be unusable in cases where a specific framerate is required.

The H4 IR domes are similar in size and construction to other outdoor dome models, with similar features, but two additions not commonly found:

We review the physical construction of the camera in this video:

For the most part, configuration of the Avigilon H4 web interface is similar to the H3, with some slight changes:

We review these changes in this video:

IR range of the Avigilon 4K camera is specified at a relatively short 15m, much shorter than most outdoor 4K IR domes specs, such as the Sony 772R (50m), Hikvision DS-2CD4585-IZH (40m), or Panasonic 781L (30m). In our tests, we found this spec to be roughly accurate, with greatly reduced details beyond 15m, seen below as the subject enters the parking lot from the field (~60') and approaches the camera:

In our tests, the 5MP Avigilon H4 roughly met or slightly exceeded its 30m IR range, with the subject becoming clearly visible after he passes the nearest marker (reflected on the right), placed at ~150'.

Both Avigilon cameras feature adaptive IR, which uses different sets of LEDs for different zoom levels. This is shown in the animation below, with the IR turned on with the camera at its most telephoto (narrowest) zoom level. The camera is then zoomed out to its widest AoV, with the second set of LEDs switching on and the first set dimming and finally turning off.

We tested the H4 cameras and competitors in an open field/parking lot to see how they performed, using a wide angle of view (~80°): 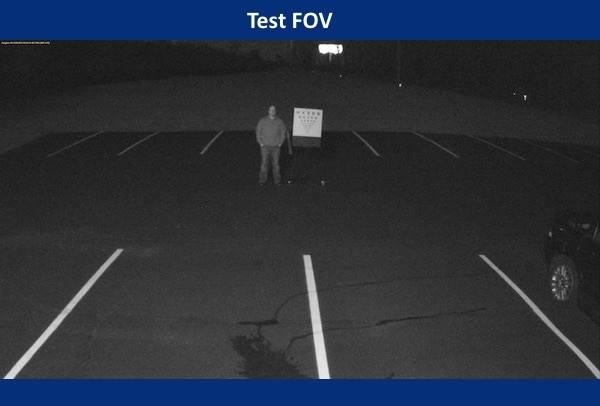 At long ~100' distance/~23 PPF, none of the cameras produce usable images of the subject or test chart. Note that this distance is beyond the IR range of all cameras tested. 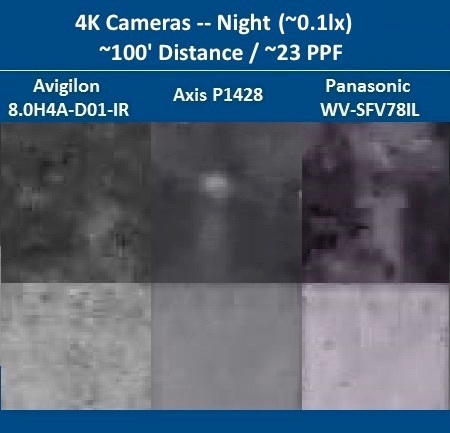 Nearer to the camera, with PPF higher, details improve, with performance similar to or slightly better than the Panasonic WV-SF781L 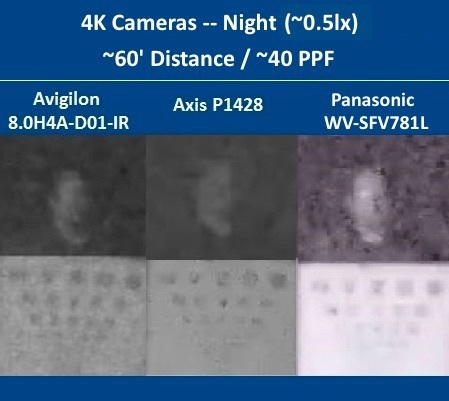 Finally, closest to the cameras, where PPF is high, the Avigilon 4K provides the best details of our subject and test chart legibility, with the Panasonic 781L washing out the chart entirely. 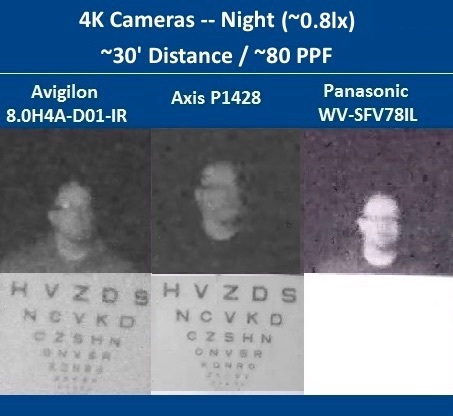 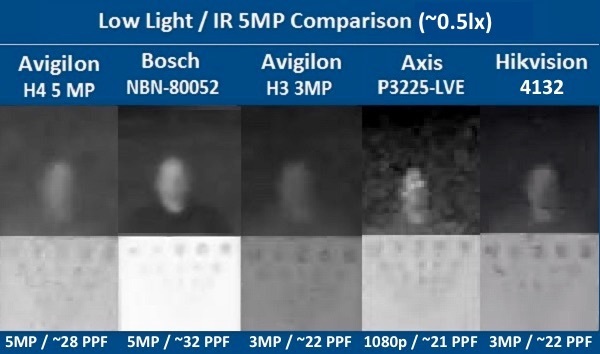 At closer range, details delivered are strong, with the test chart legible to line 3 and the subject roughly discernible. 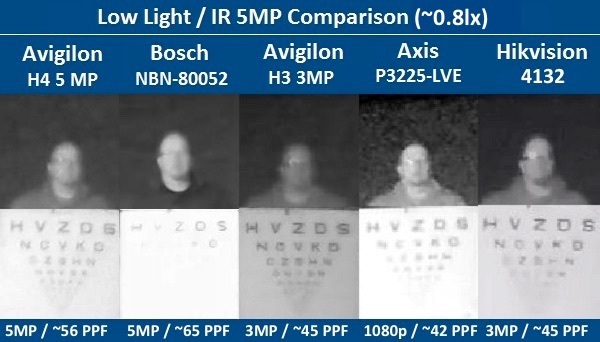 Switching to color mode at night, with IR off, the Avigilon H4 5MP produces the best details of the test chart: 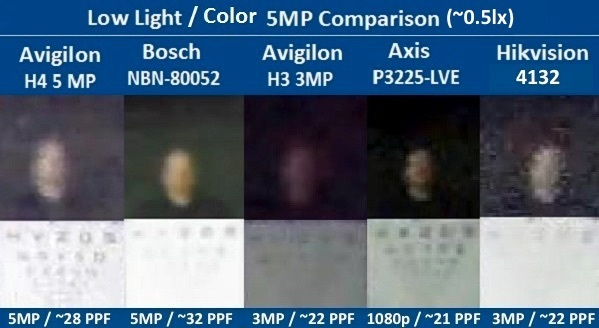 At near range, ~30' from the camera, where PPF is higher, the 5MP model remains the brightest camera tested, though it is outperformed by other models due to some overexposure of the subject and especially the test chart. 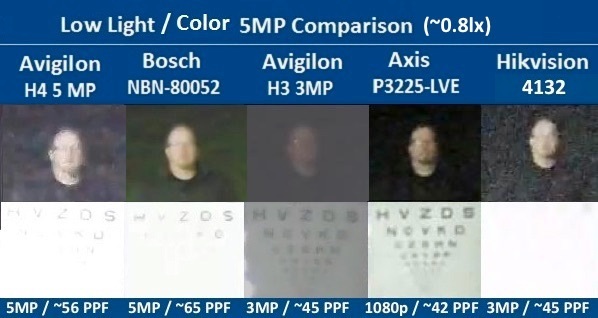 Using a very wide field of view (~145'), the Avigilon 4K camera produces details of the subject similar to the other 4K cameras tested, with slightly more chart legibility than Axis and DVTel, both of which wash out the chart. The test chart is most discernable in the Panasonic 781L, which clearly shows the first and second lines. 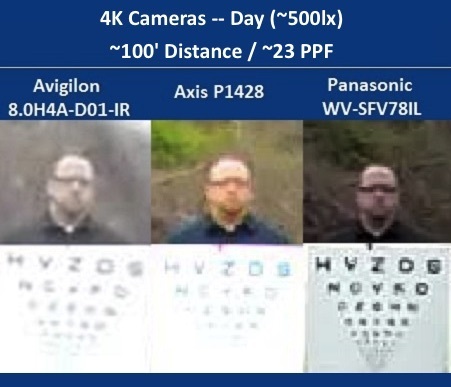 Near the cameras, with PPF much higher (~80 vs. ~23), details delivered by Avigilon, Axis, and DVTel are again similar, and Panasonic once again produces more usable details. 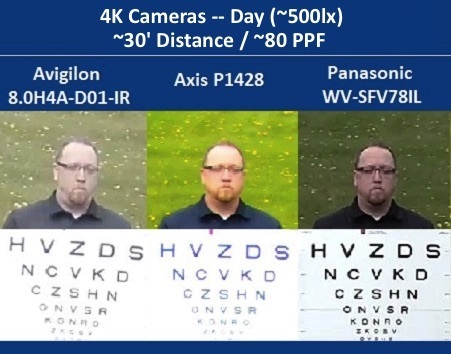 Looking at the 5MP Avigilon in full light, it performs moderately worse at longer range/wider FOV than the Bosch 5MP, with reduced contrast of the subject and test chart, though provides slightly better subject details than the H3 3MP. 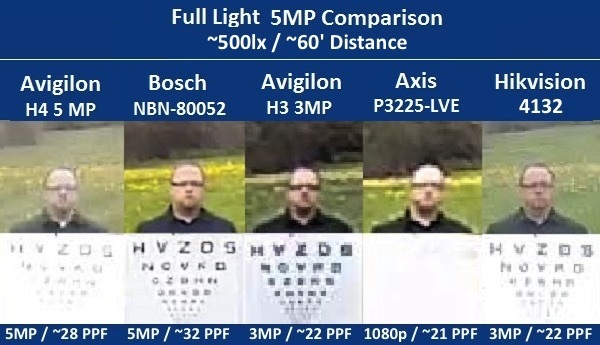 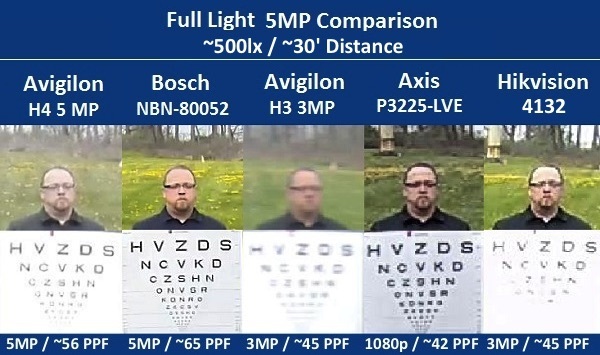 We tested bandwidth in the scenes above to see how the Avigilon H4 cameras compare to others.

In full light, the Avigilon H4 4K's average bitrate was higher than the Axis and Panasonic cameras, especially in low light, spiking to ~18 Mb/s. 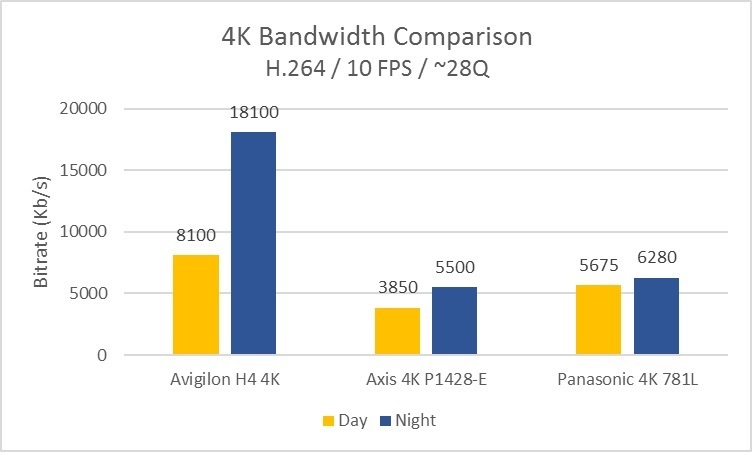 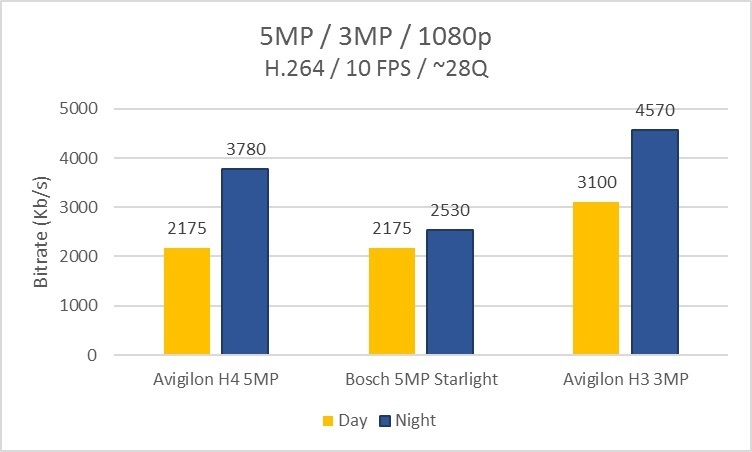 Avigilon has introduced "Idle Scene Mode" in the H4 cameras, which allows users to adjust framerate, bitrate, I-frame interval, and compression when the camera detects no motion, potentially drastically reducing bitrates. By default, the camera switches to 1 FPS, with a keyframe interval of 4.

In our tests, Idle Scene Mode worked without issues with Avigilon's own VMS as well as Exacq. Bitrate gains will vary widely, depending on specific settings used, with higher idle framerates and qualities conserving less bandwidth than 1FPS/long I-frame interval settings, for example.

Features like Idle Scene Mode have been seen in other cameras/recorders, but are fairly rare. 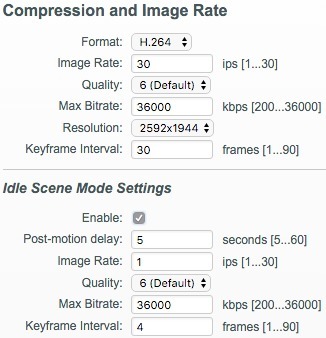 Cameras were tested using default settings, with the following adjustments: