Avigilon's stock is down 50% from their peak price last year.

The stock price is also significantly below the levels when Avigilon raised an additional $169 million from investors in the past 2 years.

Now, Avigilon is gearing up to buy back stock at the much lower price levels. In this note, we look at the plan and how it might help Avigilon.

Up until the beginning of 2014, Avigilon stock and business was heading straight up. In the past 15 months, the difficulties have compounded, starting with the CFO resignation fallout and continuing with multiple quarters failing to meet expectations.

Their stock chart reflects that: 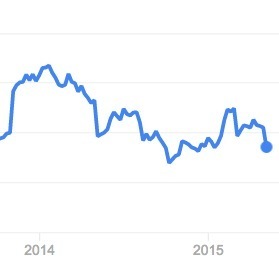 Avigilon has initiated a "Normal Course Issuer Bid" which allows it to buy up to 10% of the public float over the next 12 months. The company is not required to buy any shares but, if they do, the shares "will be returned to treasury and cancelled."

Not surprisingly, Avigilon believes the stock is undervalued:

"Avigilon's Board of Directors believes the current price of Avigilon's common shares (the "Shares") does not properly reflect the underlying strength, operational track record, and growth potential of the business. "

Compared to other surveillance companies financials, like Axis, Dahua and Hikvision, one can make a reasonable case for the stock being undervalued. For example, Axis was acquired at ~4x revenue, while Avigilon, with a notably higher growth rate, is trading at 3x or less.

On the other hand, Avigilon has a lot more operational / management risks than the comparable companies in the space. For example, a clear trend exists among employees about how Avigilon is run based on fear and intimidation from a few executives. The CFO fallout and other executive departures signaled that and the continued complaints from employees appear to confirm that.

Avigilon's executives make it harder on themselves with poor communication. Look at the Q1 2015 call transcript and it is clear that their responses are oblivious to the company's decelerating growth and growing challenges across the industry. Even Stockhouse, a message board primarily for Avigilon's bulls, are now increasingly pessimistic about the company's future and ability to convince investors.

Most fundamentally, it is hard to see how any company is immune to the growing commoditization of the megapixel camera market, outside of the Chinese manufacturers who are driving this. Even if Avigilon is a superior Western company, growth may only now be routinely achievable at the 15 to 25% level, not the 50-75% level of just 18 months ago.

Nonetheless, this announcement should help Avigilon in the short term as (1) it makes the company's intentions clear to defend the stock price and (2) provides resistance against short sellers, (3) some hope for bulls and even if they buy millions of shares, Avigilon has more than enough cash and credit available to easily cover the move.

The bigger challenges are structural and long term for the company. With the conventional megapixel camera market commoditizing, can Avigilon continue to stand out with analytics, access control, patent enforcement, new technologies etc.? Or will Avigilon be dragged back down to a 'normal' surveillance manufacturer?

Avigilon has continued to have serious executive turnover problems, with the SVP of sales 'resigning', the VP of Marketing quitting and the COO being ousted since announcing this plan.

Avigilon Wastes $39 Million on Stock Buyback on Jul 14, 2015
Avigilon is investing - in their own stock. Over the past 2 months, Avigilon...
Avigilon 'Questionable Management' / 'Authoritarian' CEO on Jun 04, 2015
Wow. The shots at Avigilon continue to intensify. Canada's financial TV...
Comments (7) : Members only. Login. or Join.