Typically, VMS software displays video 'as is'. While there may be basic brightness, contrast and saturation controls, those require manual adjustment with significant tradeoffs.

By contrast, Avigilon's VMS has an interesting feature called 'Display Adjustments' that automatically adjusts the quality of video displayed. This is what the control looks like: 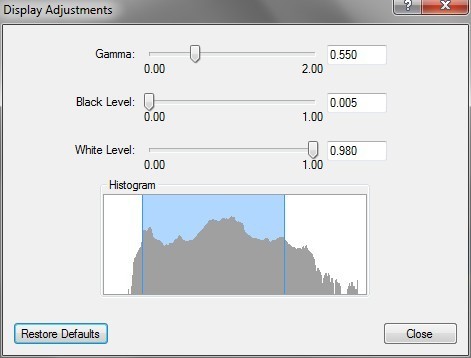 That noted, even without pulling this up, the software continuously re-adjusts on its own. Additionally, it works on any camera connected to Avigilon's VMS, not just their own.

The automatic display adjustment delivered improvements in a wide variety of cameras, including third party ones using H.264. This is a useful VMS feature.

In this screencast, we show examples of Avigilon's image adjustment and its effects on different cameras. We explain each camera's histogram, and demonstrate the effects of gamma correction and black and white levels in multiple scenes, showing which has the greatest effect.

Image adjustment follows digital zoom, so only the visible portion of the image is taken into account in the histogram, with adjustment performed accordingly. Though shown in our screencast above, this feature is better demonstrated in the following example. Using a camera with built-in IR, when looking at the entire scene, the car's license plate appears to be washed out and unreadable:

However, zooming in to only the plate, we can see that the image is adjusted accordingly, accross a much narrower histogram, making the plate easily legible (two characters masked intentionally for privacy): 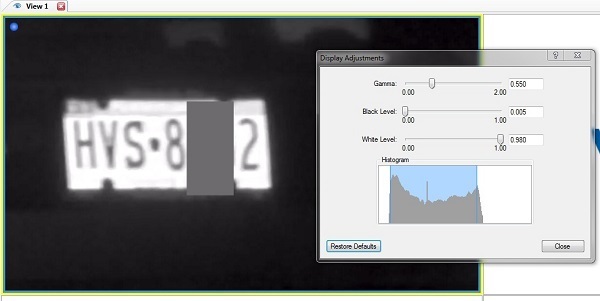 Users may also download a 5-second clip of this scene to see image adjustment for themselves (requires Avigilon Player).

We found Avigilon had most effect on low light scenes, though these effects were minimized in cameras high performing low light cameras (due to higher gain and/or more sensitive imagers). Since these low light cameras produce a more evenly bright image, there is less effect. Darker images allow more adjustment, as more data can be shifted to visible portions of the image. This screencast demonstrates these effects:

For further comparison, we used two 720p IP cameras, one low cost color only, and one high end known for low light performance. With the color only camera, Avigilon's image adjustments produce a much brighter image, with objects more easily visible. This did not necessarily translate to increased detail, as the chart remains unreadable, and the subject unrecognizable. However, it is much better for detection. 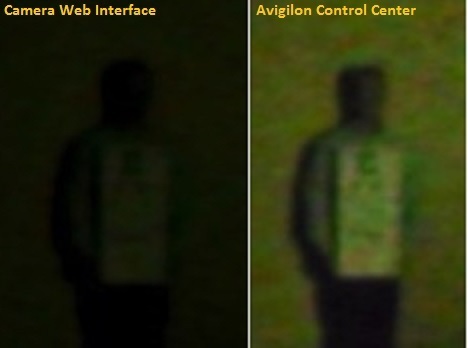 Looking at the full scene in Avigilon, we can see it is bright relative to the web interface, though with pronounced discoloration, leaning toward yellow/green: 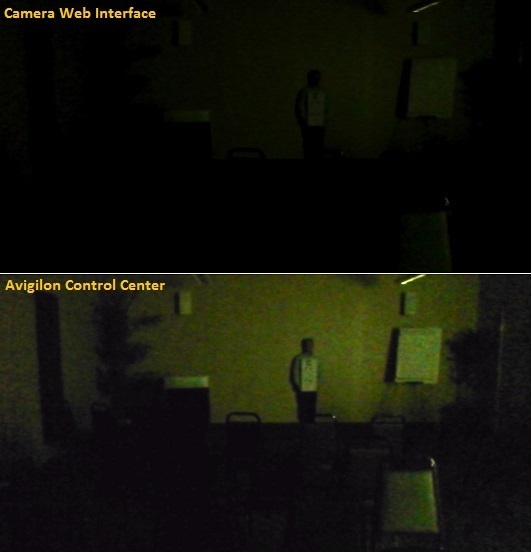 In contrast, the performance gains using the low light camera are minimal. Again, the image is brighter, though detail is reduced. This may be of practical use if using the camera for detection only, but is limited when looking for identification. 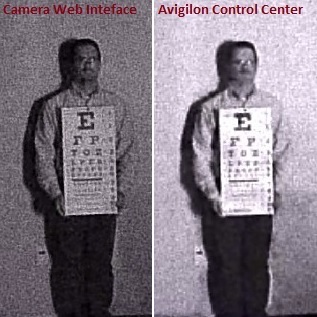 First, we tested our budget 720p camera in full light, between 250-300 lx. Avigilon produces a noticeably brighter image, though this does not translate to an increase in quality. Avigilon's gamma and white/black level correction results in slight overexposure, which obscures detail on the chart and subject's face. 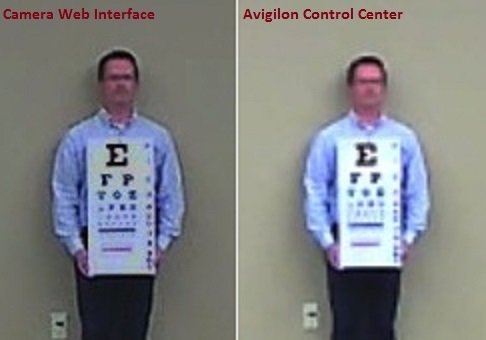 Moving again to our high-end camera, in full light, there is little difference in color or brightness, but we see blurring similar to the camera above, resulting in a slight loss of detail. 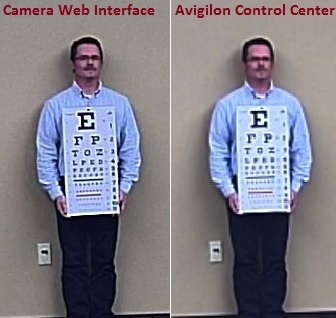 We tested ACC with a 3MP WDR camera, as well, to see if these image adjustment features impacted wide dynamic performance. The first noticeable effect was a strange pattern created as the VMS tried to perform image adjustment on the camera. This can be seen in the image below as a hazy white pattern throughout the image, which looks to be caused by image adjustment occurring on the fly, on noise patterns in the video. 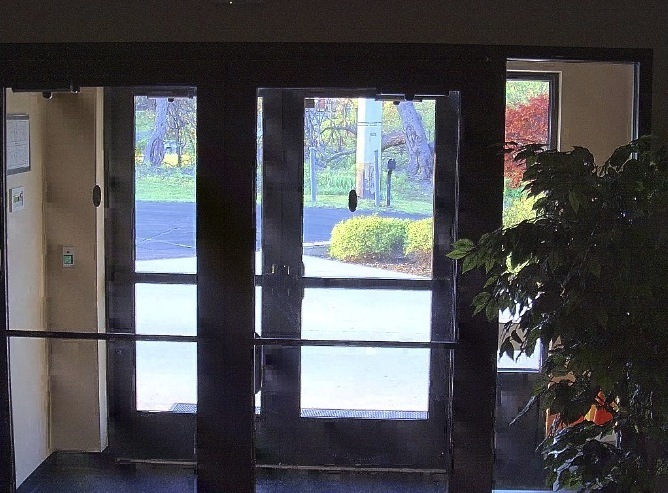 With a subject in front of the doors, we can see that ACC provides a slight improvement in WDR performance. The chart is lighter and slightly easier to read in lower lines. 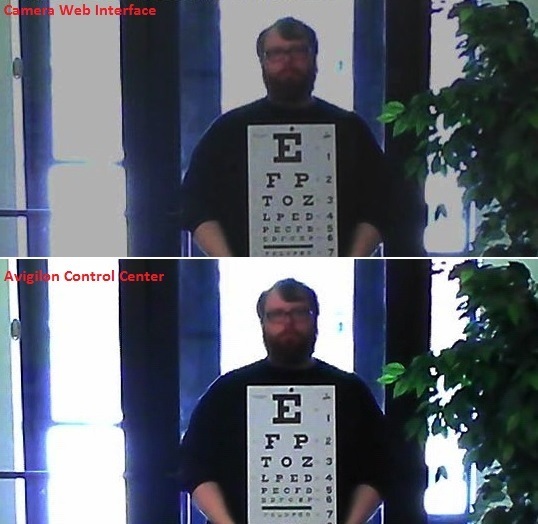 We moved our subject to two outdoor daytime scenes to see what effect ACC had, as well.

First, we tested with a current generation 1080p camera. There was little difference between the two. 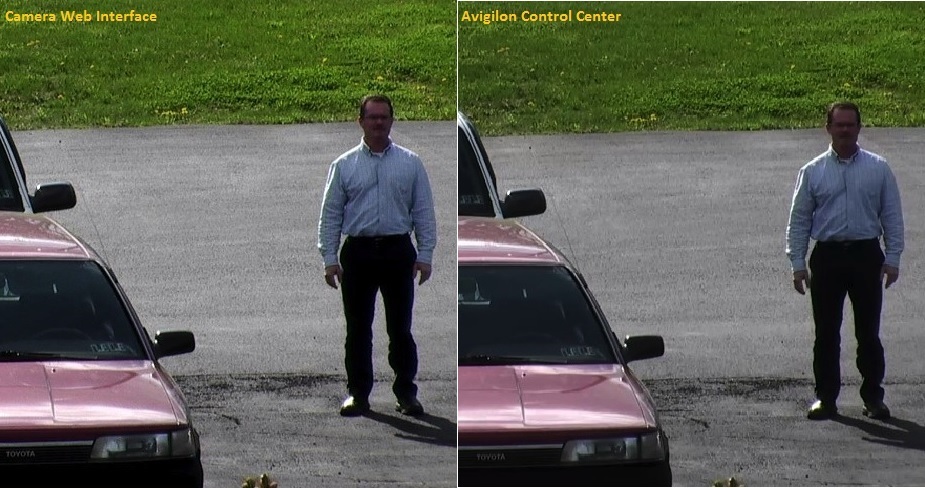 We also tested image adjustments with an older standard definition camera. Colors were slightly truer in ACC, but no other extra detail was produced.

Finally, we tested ACC with a thermal camera to see if there were any differences in visibility. Indeed, Avigilon increased visibilty of cool objects in the room, such as the plant in the corner, and defined the edges of other objects better against the background. This may translate to a positive impact in detection when using thermal cameras, since this contrast is key. However, the chart the subject was holding became nearly lost in front of him due to overexposure, and the edges of his body were less defined. This could make it more difficult to identify objects as animal or human in the field, for example.

Network Optix/Digital Watchdog VMS Tested on Jun 06, 2016
Network Optix is one of the few VMS startups of the past few years (sold in...
Video Enhancement Startup (Lentix) Partners With Milestone on Sep 29, 2015
There's a startup that claims to enhance video quality from HD IP streams,...
Testing Avigilon ACC 5 VMS on Sep 10, 2014
In this report, we provide in-depth videos covering Avigilon Control Center...
Avigilon Dirty Tricks on Jan 15, 2014
Avigilon's products are strong but their marketing is consistently and...
Comments (15) : Subscribers only. Login. or Join.