Analytics remains the 'next big thing'

But supply of high quality, ease to use analytics remain in short supply.

VideoIQ had been the favorite choice of integrators surveyed. But VideoIQ was acquired by Avigilon and VideoIQ cameras were end of lifed.

Now, building on VideoIQ, Avigilon has released their first cameras with built in analytics, the H3A bullet and dome series.

We bought these new analytic cameras and tested in two common long range outdoor scenes to find out how well Avigilon analytics work. 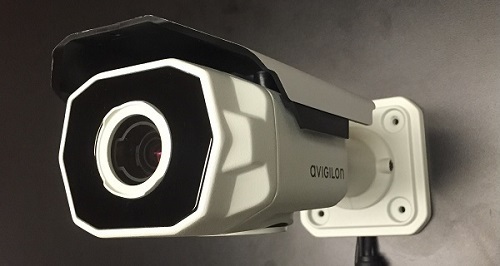 In this report we answer the following key questions:

Avigilon's H3A analytic cameras improve performance compared to past VideoIQ generations and third party cameras attached to the Rialto, at a lower price point, and with simplifed setup in ACC 5.4, making them attractive to those seeking video analytics.

However, unlike past models, these cameras' on board analytics are not integrated with third party VMS systems, making them usable only in end-to-end Avigilon systems. Those seeking a replacement for VideoIQ in their open platform VMS systems must look to other options. Given that Avigilon is supporting ONVIF Profile S including analytic events, if VMSes choose to add support for this optional ONVIF feature, integration is potentially possible.

In most instances, the Avigilon 3.0W-H3A-BO1 performed moderately better than the VideoIQ iCVR-HD which we previously tested in the same scenes. Nighttime performance increases are at least in part due to the H3A camera's integrated IR, as low light performance in the iCVR-HD was poor.

The iCVR-HD outperformed the H3A bullet in only one test: daytime detection of a human subject in the parking lot. In all others its detection range was lower.

Unlike past VideoIQ analytic cameras, the Avigilon H3A line's analytic rules are configured completely through Avigilon Control Center Client (starting in version 5.4). Rule setup is also simplified, with only the most common options shown by default (intrusion, loitering, and line crossing). Other rules, timeouts, and further adjustments are found in the Advanced menu.

We tested the cameras and Rialto in two test scenes representative of common applications, an open field with vegetation on multiple sides, ~500' long, and a parking lot and vehicle entrance, ~450' long.

All cameras were set to the same horizontal AoV of 60°.

This overhead view shows approximate ranges from camera to target in the field.

We first tested in daylight with some clouds, as seen in this sample image. 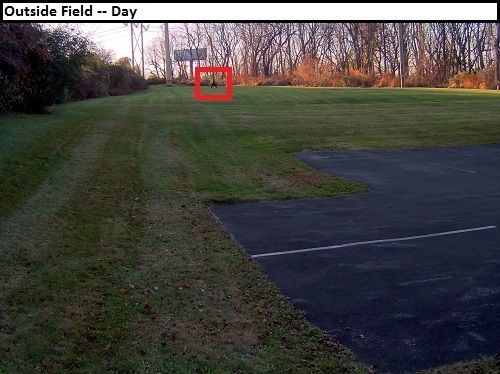 In this scene, the Avigilon H3A analytic camera outperformed both cameras attached to the Rialto both when the subject was crossing the scene, and as he approached the cameras. The analytic camera had by far the best approaching performance of cameras tested.

Note that this crossing range was equal to the top cameras in our previous Rialto test, the Bosch NBN-932V, and slightly further than the old generation VideoIQ iCVR HD (~350' range) which were tested in approximately the same FOV.

At night, performance dropped significantly due to the low light levels in the field, ~5 lux in the near field of view, down to about 0.05 lux at the end of the field. 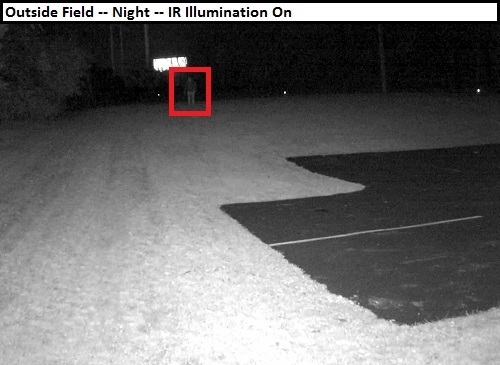 IR illumination in all cameras compensated somewhat it short to medium ranges, but was unable to illuminate far enough to maintain daytime ranges. The H3A bullet still outperformed other cameras in this scene, though crossing range was less than 50% of its daytime measurement.

Next, we moved to the parking lot/entrance scene. Approximate distances are shown in this overhead view:

This field of view shows the scene, with human and vehicle subjects in the parking lot, and vehicles passing by on roadways adjacent to the building. 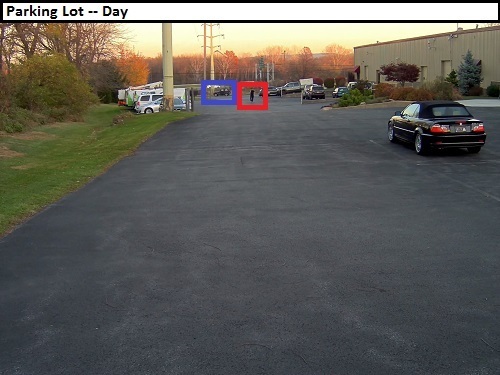 Again, the Avigilon analytic camera outperformed other cameras in all tests, reliably detecting crossing humans out to about 315', and approaching at about 190'. The H3A model also reliably triggered on vehicles on the highway beyond the scene, about 600' range. Approaching vehicle distance was at least 450', though we could not test beyond this due to the limited test area size.

Finally, we tested in this scene at night. Light levels were about 1-5 lux due to the building's outdoor lighting. 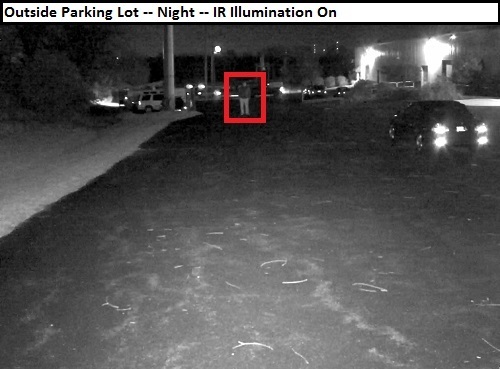 Again, crossing human detection range decreased by 50% or more in this scene. The same was true of crossing vehicles. Approaching human range in all cameras was approximately similar.

Vehicles moving toward and away from the cameras were very difficult to detect due to the severe blooming effects of headlights and taillights, an issue we first noticed in our test of the Rialto. No camera reliably detected vehicles at any range when moving toward or away, noted as a star in the chart below.

The physical construction of Avigilon bullet cameras with on board analytics is the same as non-analytic versions. However, note that on current models of all form factors, an SD card slot has been added next to the service port (seen below), which was not found in the 2.0W-H3-BO models we previously tested. 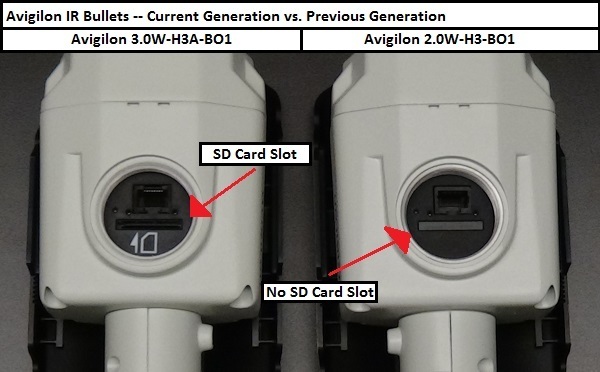 Note that this storage does not integrate with ACC, though may be set up to record full time, on event, or when the camera loses connection to the server. Recordings must be retrieved through the web interface or by removing the SD card.

All devices were tested at default settings except for shutter speed which was standardized to 1/30s.

All devices tested with the same horizontal AoV at 60°, such that the scene width was always the same.

FLIR Launches Saros on May 01, 2018
Has FLIR solved the video intrusion / remote monitoring problem or have they...
PureTech Video Analytics Examined on Apr 21, 2017
PureTech's analytics were chosen for a US border protection system (see...
Avigilon H4 5MP and 4K Cameras Tested on Apr 25, 2016
Avigilon has released their H4 HD line, with promised improvements including...
Hikvision Video Analytics Tested 2016 on Feb 04, 2016
We tested Hikvision's video analytics on six Hikvision models, ranging from...
Axis Video Analytics Are Weak on Oct 05, 2015
For more than a decade, video analytics has frustrated and disappointed...
Here's What Avigilon Should Do Now on Aug 24, 2015
An Avigilon partner asked: "What would be your Goal if you run...
The $500 FLIR Thermal Camera Tested on Jun 19, 2015
$5,000 thermal cameras were super 'cheap' not too long ago. Then $2,000...
Exacq vs Avigilon on Jun 17, 2015
A member requested: "I need to find some IPVM info on Exacq vs. Avigilon. I...
Videofied 'Filtered Monitoring' Aims to Bring Outdoor Intrusion Detection to Masses on Apr 29, 2015
Videofied's updates to their video intrusion platform aim to bring outdoor...
Axis VMD3.0 Analytics Vs Avigilon Tested on Jan 12, 2015
Axis has released the next generation of their advanced video motion...
Security Sales Forecast 2015 on Jan 05, 2015
The biggest surveillance manufacturer marketing push in 2014 was 4K. And the...
Avigilon Acquires All ObjectVideo Patents for $80 Million USD on Dec 18, 2014
Wow. You thought Object Video played hardball suing large manufacturers like...
Avigilon Dirty Tricks on Jan 15, 2014
Avigilon's products are strong but their marketing is consistently and...
Comments (25) : Subscribers only. Login. or Join.