What is the average frame rated used in video surveillance systems?

Historically, 30fps has been considered 'full' frame rate and, in the past few years, 60fps video has become increasingly common.

Previous IPVM survey results found the average frame rate in 2011 was in the 6-8fps range. Now, more than 4 years later, how much has that changed? 150 integrators told us what frame rates they are using and why. Inside, we breakdown the results.

Now, the average frame rate is ~10fps, up moderately from 4 years ago, but still far below what almost all cameras are capable of delivering. The chart below shows the breakdown of integrator responses: 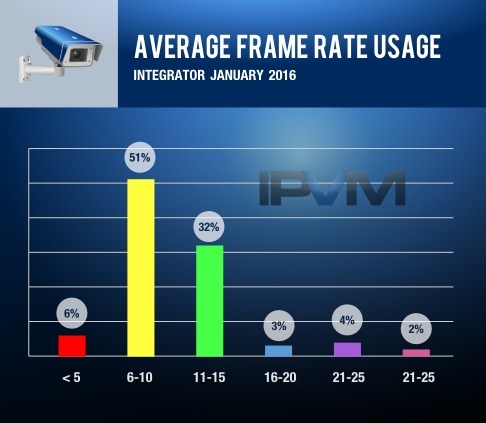 The most notable shift was the steep drop in integrators averaging 5fps or less, being cut by 2/3rds since the last survey. 5fps or less pose risks even with normal motion (e.g., walking) as the infrequent frames may not provide sufficient opportunities at a clean shot (e.g., a face looking at the camera). As storage costs have become lower, almost all integrators have moved away from such low frame rate recording.

The 'average' integrator moved from ~7fps to ~10fps, a level that our Frame Rate Guide for Video Surveillance shows is fairly solid for capturing surveillance video.

Over and over, integrators emphasized that ~10fps provided a good balance between quality, storage consumption and cost:

Here is an example of 30fps vs 10fps vs 1fps for a person walking and shaking their head - a harder scenario for frame rates given the multiple planes of movement:

Most agree that 10fps is more than enough to handle this. See more of these examples in our Frame Rate Guide for Video Surveillance.

To be clear, we do not contend that 10fps is 'right' for everyone. Indeed ~10% of integrators averaged 15fps or more, so there is certainly a distinct minority of professionals who go for significantly higher frame rates. Some of this is driven by the application (e.g., money counting) or the industry (e.g., certain government applications have minimum frame rate requirements).

We do believe that 5fps or less does is imprudent simply given the relative modest costs of storing 10fps rather than 5fps and the risks / issues it avoids from smoother video and more opportunities at getting a clear shot at a subject or incident.

Interestingly, in the same 4 year period, we estimate that average resolution has increased ~300% from SD / 720p in 2011 to 1080p in 2016. By contrast, resolution (pixel count) has increased by ~10x that of frame rate, showing the importance of more resolution vs fps in video surveillance.

Looking at the increase in both resolution (significant) and frame rate (modest), compared to the decline in storage costs during that time frame, integrators, on average, are not paying more per storage per camera than they did earlier in the decade. However, they have taken the increased storage now available and allocated that primarily to more resolution and marginally to frame rate.

We project a modest increase in average frame rate over the next few years. On the plus side, storage will continue to fall in price and 'smart codecs' should reduce bandwidth demands further. On the negative side, 10fps is largely good enough for most surveillance purposes so we do not see lots of problems motivating an increase. On net, we think an increase in average to 12-15fps in the next few years is likely.